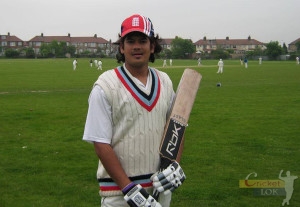 Deepesh Khatri born in Mumbai, played in Kent Cricket League, England, the captain of Pokhara Regional Team and former Nepal U-17 and U-19 player made the headlines finishing as a highest averaged player in this year’s Senior Regional T20s . Rajan Shah had an opportunity to have an interview with this happy go lucky character in Deepesh Khatri who likes adventure, visiting new places and still in love with a famous Indian Actress. Here is the full interview:

Q: Who inspired you to play cricket, or take cricket as a career, in a way, what made you fall in love with cricket?

A: Actually it was our Dad. Being a Nepali but living in Bombay (now Mumbai) at that time Dad was very much into sports. He liked cricket more than any other game so he brought us (me n my small brother) bat & ball to play from a very young age. I started watching cricket from around 1991. It was India’s tour of New-Zealand when I started watching live on television and I instantly liked Mohamad Azharuddin’s batting. He was so wristy and a treat to watch. Azhar was my idol in batting and Kapil Dev in Bowling.

Q: How much the level of competition has increased from your age level days to today in your experience?

A: When I came from Mumbai, I was like I am from Mumbai and I will easily get into the Nepal team. But The U-19 players were good at that time as well. Players like Aamir Akhtar, Mehboob Alam, Binod Das etc were there n I was a swing bowler at that time around in 1999. I started as a bowler but at that time around Nepal’s batting was terribly weak. Apart from Munik Shrestha & Sagar Pant of Kathmandu none were potentially good for higher levels. Then within a year Kaniska Chaugai & Bardan Chalishey proved they are good to play in higher levels. I despite being a bowler top scored in U-17 and U-19 nationals as a batsman in my initial years in Nepal. Then, Shakti Gauchan despite being a bowler himself did very well as batsman in early 2000 season. Hope you are not getting bored with my long answers.

Q: How much corrupted/defunct was the system during selections and team announcements? Did you have to suffer?

A: I was always the one who had to suffer with that selection thing. I was from Mumbai and I had no jack-type (power) thing to take me further. Even though, I was talented I would always get the node when selection came. I was always in the top 18 be it juniors or seniors but hardly I would get into the top 14. Whenever I had done decently in the nationals like topping the bowling chart and batting I would get into the team but rest of the time I would get axed. I had competition with the Aamir Akhtar’s, Binod Das and the Mehboob Alam’s in my early part and then Paras Khadka, Mehboob Alam and Manjit Shrestha’s.

I was very disheartened when despite being the best t20 bowler in the tournament held before our tour to Kuwait in 2007, I was never ever given a chance there in Kuwait. That forced me to leave the game and go abroad (England) in Jan 2008. I consider myself unlucky because people here are good in back-biting and other useless stuffs and I would always speak for the wrong doings so I was always framed negative in front of Selectors and the team.

Q: Tell us something about your England experience, good and bad memories?

A: Though I intentionally left my cricketing gears in the airport when I was about to board the plane. I told Mum (Mother) how I would get time to play cricket there in UK. After all, I was going there to study and earn something.

But fate had different ideas lying ahead. I applied for some clubs and got calls from three/four clubs. From Counties like Kent, Middlesex & Surrey. But, I chose Blackheath Cricket Club because it was nearby my area where I was staying. The club had 9 Saturday league teams. They put me into the eleven of 4 teams after seeing me in the nets in the weekdays. In the very first match I scored 77 not out while batting at 7 n got 4 wickets as well and I was instantly a club hero within my first match.

Deepesh Khatri was a known name after one game. The Gora’s (Native Players) were saluting me and telling me it was a honor playing with me and all that praise worthy stuffs. In UK either its county, minor counties or leagues, the club there is run with passion. Our club had nine men teams n 2 women elevens. I played for the highest level of club levels and that was our first team which played super league in Kent. For the first season, I got over 500 runs in 14 innings and that impressed my Chairman. Next season, I was about to leave the club but they offered me decent money and I stick with them. I played for the 3’s and the 2nd team of the club side by side I played for Blackheath Asian XIs on Sundays where my average was Bradman types. You can check on the official websites there. 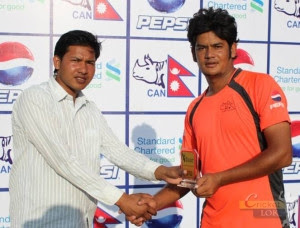 Whatever I earned in 7 years in Nepal, I earned it in one year playing there. Though, I was unhappy not playing for the country anymore but on the other hand I got that golden opportunity to play in England leagues

Q: You spent many years in sidelines, how much MENTALLY it takes to stay away from the game yet comeback like you did in this year’s Regional T20s?

A: See the main thing is I was never away from the game. While I was in UK, I damaged my right shoulder. I still can’t throw over-arm. I can bowl at decent pace and bat. I field inside the circle from last 4 years. I am not totally a fit guy to play at the highest level. To represent at high level you should be super fit and there’s no excuse to be given at the top level.

You would be surprised to know that no one has played more games than me in whole Nepal. Be it at club levels or other levels I play around 90-100 games yearly. Coz of this t20 format it is always around 100 games per year. I am used to playing on mats so in nationals it is pretty hard to adjust on turfs but this year I did really well for myself. Being the captain, I have to lead from the front coz I don’t have stars or very good players in my team to win matches. Still our boys performed well.

Q: Any young players you see as a potential player for Nepal Cricket Team if groomed nicely?

A: From Pokhara, it is none. We Pokhereli’s play cricket for fun. No seriousness here. I still think Mehboob Alam is the best. Just he should be handled well. Young players are looked well after by the coach and the captains. Still if I had to answer one, didn’t face that spinner from Nepalgunj, don’t know his name (Aakash Bista) but he was good Offy (Off-Spinner).

Q: Recently, the comeback of Raj Kumar Pradhan for Nepal has suddenly raised many eyebrows among former national players, anything extra you are preparing for? 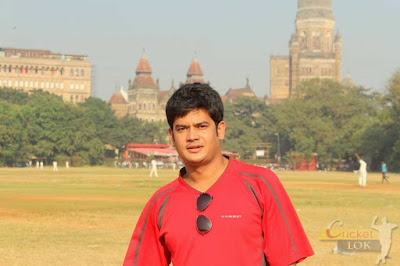 A: See I told u. I am not at all 100% fit. I can be match fit but I can’t guarantee fitness. If I can play 100 matches per year without getting exhausted then I should be match fit player I suppose. And I am not the skipper so I can’t place myself wherever I want (while fielding during the match) to place myself.

Q: As it seems u have a huge appetite for nature and adventure, which is your favourite holiday destination?

A: Tabu (Indian Actress). Neither she is married, nor did I till now. That is eternal love.

Q: Anything u wud like to suggest the passionate kids and youngsters who are willing to play cricket for country?

A: Study as well as play. Coz still the scenario for the players is not suitable to live life with it. Education always helps though I didn’t complete it. An option which is never bad.

Q: What are you doing now, Work/Job apart from cricket?

A: I run a club. I am a sports teacher in a school. And rest of the time for travelling, nature and photos. Satisfaction is what we all need to be happy. Today my Mum called from Mumbai n asked why you are not playing for the national team anymore. I was like: Mum rests (those selected ones) are better than your son.

Q: What do you expect from the squad announced today for the 2015 World Cup Qualifiers?
A: Just play like it is your last game. You have a good skipper in Paras and you should just not let the team-mates and the supporters down.

I still think Nepal should play better teams before going for the main event. I mean to say tough games. Like if I captain APF or Army squad and Paras captains region no. 8, 90% chances is that APF or Army will win. So, better play with the best. In this national we played against APF and I was not out in that match. The confidence I gained was, when I can perform against the best players in Nepal then why not with the rest and my nationals was a wonderful one. Confidence is the Key. It’s not Afghanistan but it is their confidence that beats us and Irelands confidence that beats Afghans.

Q:Your Message for your Fans:

Always Support Your team even in their down hills. Winning and losing is a part just remember we are in the top 20 sides in the world & that’s quite a achievement for a troubled country like us.