“I am ready to open the innings,” Sharad Vesawkar

“I am ready to open the innings,” Sharad Vesawkar

by Rajan Shah
0 comments
The historic participation in T20 world cup changed the general opinion of people towards Nepal cricket. While the participation uplifted the nation’s name and reputation of Nepal cricket to the world, Sharad Vesawkar stands out for his share of contribution for a world event. His batting in the T20 qualifiers was the epitome of success for Nepal cricket.

We bring you the interview of Sharad Vesawkar who has been part of Nepal national squad since 2004 and also the successful captained the Panchakanya Tej team to trophy in recently concluded inaugural Ncell Nepal Premier league. Here is the full transcript of the interview taken by Cricketlok.com representative, Rajan Shah.

Now that we got the T20 status, how is the mood in the dressing room?

We are all excited, we now have chance to play against major teams. Now, looking forward to the management for arranging the matches/series. Basically, we need a standard stadium to meet the criteria and invite international teams here. This is a big opportunity.

We are ought to play against big teams, do you see any different preparation strategies to perform at their level?

After playing in that level , we get experience of that level of cricket. While playing against Bangladesh in the T20 world cup, I didn’t felt any difference, its just that they played better than us during the crucial period of the match. The thing is, if we get regular opportunities to play against major teams our standard will improve automatically.

You won the first ever edition of NPL, how much of playing with new players excited you? Can you name 1-2 noticeable players for future?

Calling name of 1-2 players is a tough task, talents is definitely their. If these types of tournaments are organised regularly we could exchange our experiences with each other which should benefit all of us. A single tournament in a year will not help any particular player but it was a good start. The way corporate sector stepped to bring cricket forward, I hope this tradition continues.

During that period, players did not took part in the national tournament hosted by Cricket Association of Nepal, but did featured in the NPL. It may have conveyed a negative message, didn’t it?

How much responsible are the players for the present condition that saw turmoil in CAN, players and Coach?

For a positive change we have to do it. We raised the issue so I think we are responsible for all these.

During T20 world cup qualification you won the match by hitting sixes against Kenya and Hong Kong in the last overs. We fans were ripping our nails off, how did you felt at the crease?  Did you backed yourself for that situation?

I myself had bowled the 17th over and conceded 30 runs. So, I think I had a bit of anger for that reason and was waiting for my turn to bat. I got the chance at similar type of situation and I had no choices, except going for big ones. (vs Kenya)

I believed it was possible because the ground was a bit small and my role was pretty clear for such situations, playing big shot at the end. Luck was with me that day. 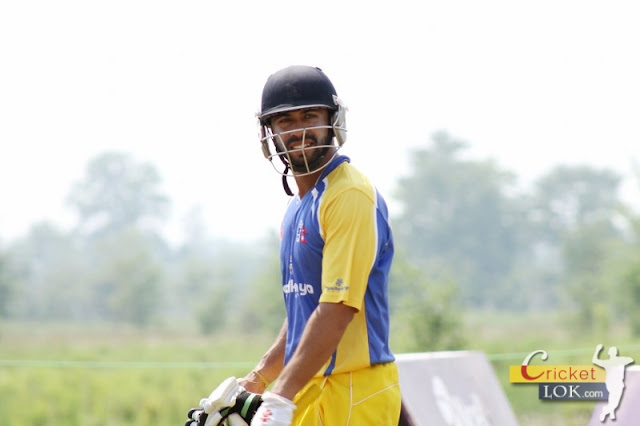 Out of your experience so far, which bowler you felt was most difficult to play?

From my childhood I had a dream of facing international standard bowlers. I have never thought of that playing the bowlers. Not one I can remember of.

What do you conclude of present status of Nepal in international cricket? Is this where we belong or we deserve better?

We played very poorly in the ICC World Cup Qualifiers in New Zealand and me as a player as well. Unfortunately the players were also injured and it affected our team balance and strategy pretty bad. Arguably, in the last 10 years it was the worst performance we had and lost the matches one-sided. We missed the ODI status which would have benefited us.

We have a very weak structure. Comparing to India in club level, a local cricketer plays 50 to 100 matches in a season. Although, we should manage at least 30 to 40 matches in a year. If there is no cricket in whole year, players will lose their rhythm.

2 dayers and 3 dayers are important. Long format of cricket helps to develop batsman temperament and batting techniques. Not only in senior level, if we are able to develop such practice at junior level there will be noticeable improvement of cricket in Nepal.

As an associate nation our future is uncertain. How difficult is it to run your daily life as a professional cricket in a sport where your future is not certain or secured?

It is true that we are not going to be successful overnight, I think the determination of last ten years in cricket was the main reason for us qualifying in the world T20 event. Every factor plays a vital role, more importantly, country’s political balance is vital. It has affected in cricket as well, our future is still not secured. We are playing cricket due to our passion and determination towards it, not putting a much of thought in running our daily life. Only thing we can do is play and perform in the ground, its impossible for us to manage everything. I think the best we can do is play cricket with optimum utilization of all the resources we have got.

International league like IPL, BPL, CPL are successfully organised every year. Players seek opportunities through their agents. Have you been offered yet? Do Nepal players have agents to do that business?

We have a very poor league structure. We don’t have domestic tournaments. In such a situation a player can only be noticed by playing overseas. For that we must have good relation, individual performance also matters, they are not going to offer without any particular quality. Personally, I think we must expect such opportunities ourselves individually. This year it was not possible because clubs had already started signing players 3-4 months ago. We should try next season.

Opening batsman are Nepal’s persisting problem, changed every now and then. You have opened for Nepal previously, what’s your possibility of opening the innings for Nepal again?

As per current progress, where do you think will Nepalese cricket be in the next 10 years?

It’s a tough question. I think we have better future watching the performance of the current crop of players. Domestic cricket, sponsors and if tournaments are organised regularly, then I think we will have a very good ranking in the future.

The current conundrum may have reduced some of craze for cricket in Nepal. What is your message to upcoming players?

Whatever we do, we do for a positive change. To bring changes some steps has to be taken. We also got big opportunity to learn more by playing outside the country about the management. There is no personal revenge, it’s about nations pride. Monitoring present situation of cricket, it is linked with people’s happiness in Nepal. Everyone is happy when we win and vice versa so I think this is the big thing. Still there is a lot to do and if we work together, nothing is impossible.