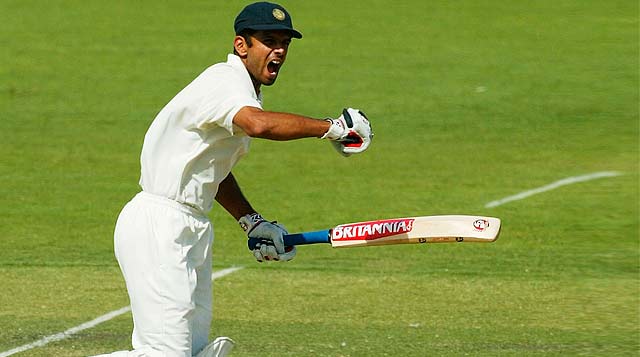 It was winter of 2003/04, India’s tour of Australia, summer in Australia. Those were the times when I don’t even use to watch much cricket. I used to just check the scores. The cricket thing was only beginning to enthrall me up. The early morning cricket, people in whites, Adam Gilchrist arranging his keeping gloves copied by group of middle-aged overweight ladies in stands just behind him, neighborhood grandma yelling ‘they are Bitches’ on them, birds flying across the ground, Rahul Dravid, Brett Lee, Mathew Hayden, Sachin Tendulkar, and all the biggest stars of generation same time in one match was a very delightful and satisfying way to start your career as a cricket fan.
It is Adelaide, one of the best Test venues in the world. It always gives us best Test match of the year, memories of cricket to remember years and years. The Adelaide Test of 03/04, when Rahul Dravid smashed, back then, his career best 233 to lead India to a monumental victory in Australia is one of the most vivid and oldest memory I have of watching Test cricket on Television.

Wriddhiman Saha after scoring his century for King’s XI Punjab in IPL 2014
That was the time when cricket was ruthless & unrelenting. That was the time when Test cricket was the ultimate glory one could only bask upon. Forget IPL, T20 cricket was just an experiment not even known to most of the followers of Indian satellite TV viewers. Parthiv Patel’s innings in Sydney was one of the most exciting things ever happened to Indian Cricket. Steve Bucknor was one of the major contributor for invention of DRS. David Shepherd was still umpiring around. Saurav Ganguly was still proving he could play short-ball, and so on.
But some things were still same, Zaheer Khan struggling with the injury. India struggling to locate a permanent opening pair for Tests.  India struggling to find ‘Test Standard’ wicket-keeper batsman. It was difficult for India to win a series in overseas soil.
Time moved on. Cricket started to be boring, predictable eclipsing all the highs and lows India managed in last decade or so. No loss was much of a fuss for India, sometimes victories too. For me, the joy of victory at 2011 in India was no where close to despair of 2007 in West Indies, World Cups. India’s win in 2007 T20 World Cup announced a new world order, things changed, IPL was born. Couple of months were robbed from the cricket’s calender, months I used to desperately wait to see them back in action again.
The cricket traveled. The cricket traveled way more than Forrest Gump did it in that movie. Cricket changed in a way. The IPL changed Indian Cricket. Nobody talks about Jiwanjot Singh or Robin Bisht, people simply know Manish Pandey and Sanju Samson as new Test hopefuls.  They don’t recall Wriddhiman Saha who has served Bengal consistently for years in Ranji but remember his century against Kolkata Knight Riders in IPL 2014 for Kings XI Punjab. Experts/Commentators don’t make much fuss about wicket taking abilities of bowlers, spinners specifically, they are excited by seeing batsmen struggling trying to defend against them in IPL and so regarded as prodigy.
The recognition of talent has changed. The importance of an innings/spell has changed. The stage got broaden from Domestic and ODIs to T20Is and IPLs for dress rehearsal and screen tests for players. Players who could play the demanding format in Test cricket. Players now can claim their spot in Indian side by thrashing Indian bowlers at World Stage as provided by IPL.
And did I mention N. Srinivasan, the India Cements head, the CSK head, the BCCI head, the ICC head, the BIG3 head, the man with too many heads. The ‘a-riddle-for-you’ of cricket, hint: mythological.

Virat Kohli & Ajinkya Rahane with MS Dhoni.
Things always looked fishy. No, I couldn’t attach any emotion with this sport. A loss was no more a loss. It was just a passing time before the ODIs arrived or T20s arrived, for which it got the most recognition and mattered most than loosing a 5 day Test in 3 days or 2 days sometimes. There was no sacking, no dropping, not a hint of change in approach. Rather India persisted. They called it transition, but I couldn’t see more than handful of players being tried. They couldn’t strengthen the team, they strengthened the IPL by adding teams, they strengthened the pitches by making it rank turners, they waited for teams to visit India, they thrashed them there. Found happiness on doing that. Like they do in IPL, where an Indian team loses and Indian teams wins.
Matches seemed pointless, ODI already was, Test didn’t bothered much too. Nobody was bothered. Forget fans, forget board, forget players, even the captain didn’t made much conclusions from the matches that went either ways. R Ashwin still made world record for an Indian bowler but hardly is noticeable in Tests overseas. MS Dhoni, statistically, is India’s most successful Test Captain but hardly has raised any eyebrows overseas or to an opposing captain.
Then India toured Australia again. Things changed in last Test, MS Dhoni was not available, Virat Kohli was made captain of the team. It reminded me of old times, the times when cricket used to matter. A win is everything we play for in a sport. Virat knew that. The stage was grand and grander by the circumstances around.
The death of Phil Hughes made it emotional. The world stood by him. Condolences were received from all over the world. It postponed the first Test. Probably, the time when Cricket stood, and thought on its feet.

Virat Kohli at Adelaide after scoring his 7th Test Century
It completed a circle, I guess. Every innings was meaningful, it was no more formalities in the name of series on a calender. Every score was a milestone. The broken back was not a problem. Not even the fifth day pitch. Both teams combined to put a performance worth tribute to Phil Hughes. An effort from India worth remembering the Test Cricket they played of old times and ironically Australia has been their most regular opponent they played most cricket with.
Virat Kohli lead the team from front. In both Innings, he ensured there was intent. He made things happen, and things that happens to win a Test. Things Sourav Ganguly can be proud of. He scored centuries Sachin Tendulkar can be proud of. He scored two centuries in two innings, Rahul Dravid can be proud of. He almost took India home in 4th innings VVS Laxman can be proud of. He made India proud.

Ausssies celebrating after Adelaide Test victory
He fell to a genuine off spinner. After all the series of bans to all the chuckers cricket nourished and flourished in last decade or so. A genuine match winning off-spinner after Australia had that genuine match winning leg-spinner in Shane Warne.
Australia now has David Warner & Steve Smith if not Mathew Hayden & Steve Waugh. India now have Virat Kohli & Murali Vijay if not Sachin Tendulkar or Virender Sehwag, the cricket has rolled back. The cricket has started from where it left, for me. The first test between India and Australia in Adelaide reminded me of my childhood. When things were normal. When things were cricket.