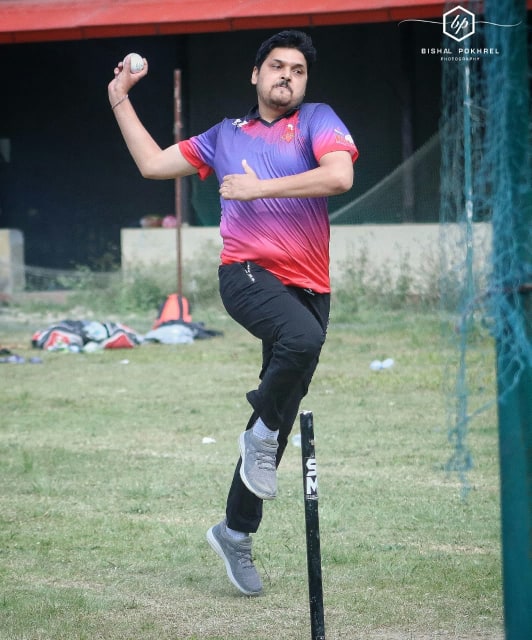 In a time when Nepali cricket needs people with love, passion & vision, provided the chance & opportunity, a former professional cricket player from India is willing to do whatever it needs to develop Nepali cricket rather it be any independent cricket tournament or in association with CAN.

Mr. Manish Manohar Sakhalkar was one of the proud members of the Mumbai & Haryana Ranji Team for many years. With career best bowling figures of 4/21 in First Class games & tonnes of club cricket experiences, he knows what it takes to ‘been there, done that’ in cricket. A 39 years old baby face Manish looks like 29 years old and enjoys life like a 19 years old.

A handcrafts business man from Mangalbazaar (Patan) is a passionate cricket lover before anything. He is a director at “Red Cherry Sports Management” formed in 2012 along with former Nepal cricket player Prashanna Shakya and Chief Adviser at Lalitpur Cricket Association.

Shakhalkar is currently member of the Shani Warriors (In Cover Pic) along with Prashanna Shakya. Warriors is one of the best, in fact the best on consistency meter, indoor cricket team in Kathmandu Valley. They have reached two finals of two corporate indoor cricket tournaments held in two different venues in Kathmandu already. 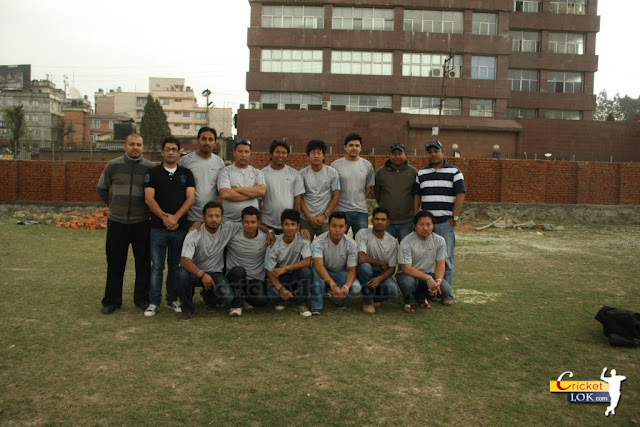 The right arm medium-fast bowler from Bandra (Mumbai) is a voracious thinker of Nepali Cricket. Here is Cricketlok’s Chief Editor Rajan Shah’s full conversation with Mr.Manish Shakhalkar the man who wants Nepali cricket to grow by each passing day.

Tell us something about your cricket. How it all started, your source of inspiration behind the passion?

My father Manohar Shakhalkar & mentor Chandrakant Pandit (ex-India international), inspired me to fuel the passion of cricket in me. After that, it was all me playing age levels, U15s, U16s, etc in Mumbai organized by Mumbai Cricket Association (MCA). I loved bowling fast. My honorable coach Mr. Hemu Dalvi Sir taught me the art of bowling. Though my career was short lived due to injuries, I was in thick of things with players like Ramesh Powar & Ajit Agarkar competing together for the Ranji squad. During 1996 to 200, that was the time when fast bowlers like Paras Mhambrey, Salil Ankola etc were doing great for Mumbai and eventually made it to Ranji Squad & eventually the Indian side. I was getting less chances sitting in fringes which then I decided to make a move for more regular chances and represented Haryana in Ranjis. It doesn’t worked out as I planned and an unfortunately injuries robbed a career from me.

During my school days (1994/95), the club I used to play for in Mumbai took us in a tour for Kenya for a cricket tournament. After the completion of the event, a Nairobi based cricket club, Nagara Sports Club, was impressed by my bowling. They offered me a contract to represent their club. I played cricket for 2 seasons there.

How come Nepal? Where it all began?

It was in 1999/2000 when I came Birgunj (Nepal) to play cricket for Union Bank of India. I met my wife. We became close friends. I fell in love with her. She is a Nepali. I got married 2007. Then in 2009, I decided to settle here at Lalitpur, Nepal. It feels like home. I met Prashanna Shakya in 2012 and decided to establish Red Cherry.

How do you see the state of cricket in Nepal?

It’s growing. It can be huge like anything. It can take the reputation of country to different level. Paras Khadka & Pubudu Dassanayake are best thing that ever happened to Nepali Cricket. With class players like Gyanendra Malla, Sharad Vesawkar, Sompal Kami, etc Nepal can dream for the ultimate glory in the world of cricket.

But the sad part remains the inactive association. The passion that players have lacks in CAN. By now they should have already secured the futures of cricket players. Be it financial or recruiting jobs which would aid them to make a life post retirement. Cricket should already have been a household career path given the craze & possibilities Nepal have in cricket and all the positive intuitions from ICC.

As a sportsman what do you seek from sports body like CAN to sustain the immense growth of talent, popularity of cricket and dearth of financial securities?

In my view, CAN should work like a corporate house. Divided in two bodies, administrative & development. The administrative part should be free of politics, less interference of government. Whereas, the development should look after the cricket, players, former players, young players, fixtures,  and all. Nepal is about to play World Cricket League Championships and still don’t have a proper cricket stadium. What CAN need to do right now is,

Host games: Arrange tournaments. Invite ‘A’ teams from Test playing nations. Teams have struggled to get the status from ICC, Nepal was provided with the T20 but yet we haven’t seen Nepal play any major international tournament despite interest from various associate countries. Provide exposure to the players like they did for Sompal Kami & Sagar Pun, but they need to do that for other players too like Rajesh Pulami who looked in good form recently.

Financial Security:  CAN really need to address this situation really fast. Players won’t be in very good state financially after they retire from cricket. They will struggle to make a living out of it. CAN needs to arrange various ways of involving corporate houses for betterment of current state of players.

Domestics: The most important part regarding the talent of cricketers for future. Paras Khadka can’t keep playing for ever. They will need to find his replacement. And the only way is make domestic setup stronger and effective. Organize competitions from school cricket to college cricket.

How do you see domestic cricket, whatever it is for now, of Nepal?

To start with very basic things, I will like to tell you about my school days back in Mumbai when I used to play a 6 months long domestic club cricket, for school. Then there used to be weekend games in between the 5 days of season games. It’s like cricket was everywhere & every single time. But a proper selection season in Nepal lasts for only 5 days. Nepal won’t get players like that.

I have a question for Nepali cricket caretakers, Where is Anil Kharel? What happened to him after almost making every print or online media of Nepal and other countries? The question is not if he made it big but the question even if he failed, how can we see that, know that. He had world in his feet but instead of grooming the youngster I don’t even know what happened to his cricket.

Not only that, players like Rajesh Pulami who is in good form these days have no where to keep playing his cricket and sharpen his skills. Nepal team needs new, dependable, batsmen, Rajesh could have been the answer but we end up seeing same line up every time. Reason, they don’t have stats, exposure, domestic career to back up the talent.

Also, the major sorry state of the domestics events and the players involved are they don’t even get enough funding to organize a proper systematic tournament. Forget finance, Lalitpur & Bhaktapur cricket associations don’t even have grounds to organize club cricket competitions. The domestic cricket of Nepal is in dire situations.

How important is sports and business relationship for growth of cricket as a brand and career opportunity?

Again, I will like to go back to my school cricket days. In 1991/92 approx, MCA organized a free camp for fast bowlers in co-operation with Masat Lal, the corporate house back then. Later, Sir Frank Tyson from England assisted by Balwindher Sandhu conducted a trials camp for players from Mumbai for a month, all helped by the corporate and arranged by MCA. Out of 100 players from the trials, players like, Sairaj Bahutule, Nilesh Kulkarni, Avik Kuruvela etc came from that setup. Just a small testimonial of how things can work if both the parties can co-work on the projects that will help Nepal cricket.

In short, corporate houses will help bring prosperity for players if not the whole team or association. Need a selfless and honest attempt to open doors for the sectors to invest in Nepal cricket.

How do you see the current ‘corporate and cricket’ relationships in Nepal? Your thoughts on tournaments like SPA, NPL, and Corporate Adoption Program (CAP).

Starting with CAP, I have a issue with the program the way it is titled. Why are they ‘Adopting’ the cricketers? It is a great initiation. Certainly, benefits for players but how can one adopt a player, a human being when they already are playing cricket for Nepal. Personally, I think it is not a right word. We don’t adopt them. We assign them, contract them, and similar stuffs.

SPA Cup is a great thing, There are no words to thank Subash Shahi for making the impossible come true. He is a source of inspiration to many peoples in country now. He proved, in fact, the peoples from Dhangadhi proved that cricket should not be limited to valley but shall be decentralized all over Nepal. But again, it would have been much more better if the teams should have been franchises than colleges. The senior players playing for colleges didn’t look convincing. Nothing is perfect but surely, things would be improved in future editions.

Regarding NPL, it was success based on exposure for cricket but financially, it was a flop. I didn’t see player getting any rewards or money from the games they played for there franchises or corporate houses they were assigned to. Practically, the concept was brilliant, it gave Nepal its first premier event but it wasn’t premier for players.

Rest assured, what Nepal needs is a combination of NPL & SPA Cup, grander and creative.

What is the role of Red Cherry in development of cricket in Nepal?

Red Cherry’s aim is to establish the synergy between sports, business and communication planning to deliver 360-degree sports marketing and management solutions to the client with a zeal & motive of making stronger and better friendship by the means of sports and events.

We managed sponsorship deal for players Subash Khakurel, Ramnaresh Giri & Rajesh Pulami in past. Then we went on to initiate sponsorship for 4 major Nepal players of Kits by leading sports brand SS Sports.

To be honest, we haven’t got much support from the CAN in past. Else, we could have done much more from our side. Nevertheless, we are in a pole position to bring something very grand event in 2016, given CAN supports us.

Last but not the least, what are your thoughts on Nepali cricket fans?

The passion among the fans is no less than India. The fan following is absolutely crazy. Sometimes, it lures me if I was a Nepali team player just for the immense support they have for their team. No words are enough to describe the support Nepali fans have for cricket.

That makes me believe Nepal will surely play the World Cup in future.