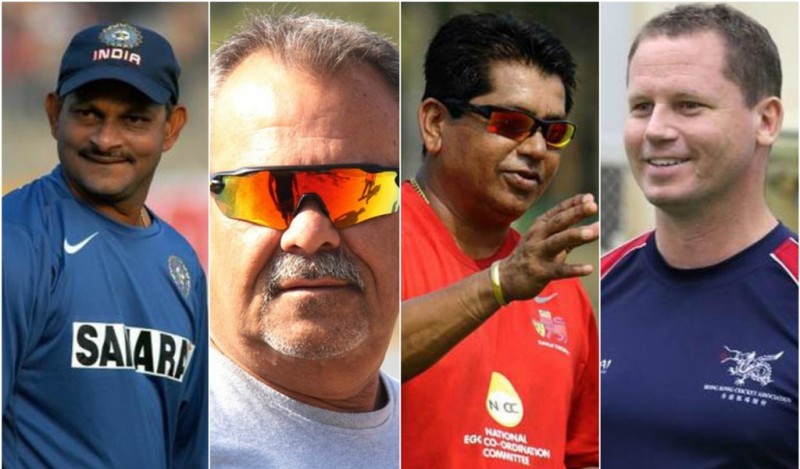 by Rajan Shah
0 comments
4 Realistic Head Coach candidates for Nepal
Nepal desperately needs a coach who should not only identify and develop the young and upcoming players but also instill some real winner’s mentality by working on killer instinct. Of course, it has to be realistic in Nepal’s case and ever growing coaching options in the world right now. Nepal cannot afford multi-million acquisitions but should look for free coaching agents looking for new challenges. Here are few names that might help Nepal make that extra push in their endeavor to be a top associate nation:
Dav Whatmore
Davenell Frederick “Dav” Whatmore is a Sri Lankan-born former Australian cricketer who played seven Test matches for Australia in 1979, and one One Day International in 1980. At first-class level, he scored over 6,000 runs for Victoria.
Since the 1990s, Whatmore has coached the Sri Lanka, Bangladesh and Pakistan national cricket teams. His last stint as international cricket coach was in December 2014 when he was appointed coach of the Zimbabwe team. He also coached the Kolkata Knight Riders team from 2009 to 2012.
Whatmore retired from professional cricket in 1988/89 to pursue a career in coaching. He coached Sri Lanka in two separate spells, during the first of which he won the 1996 Cricket World Cup. In between those spells, he coached Lancashire where he won the National League in 1998 and 1999, and the NatWest Trophy in 1998.
From 2003 to 2007, Whatmore coached Bangladesh to their first Test match victory early in 2005. Bangladesh shocked the cricket world later that year with a victory over the top ranked Australia and then South Africa, when they were top, ranked during the 2007 World Cup, where they also defeated India to reach the Super 8 stage.
He then coached Pakistan lifting the Asia Cup after beating Bangladesh in the Final. He left the coaching position when his contract ended in 2014.
He is the best Nepal can get. In, probably, the twilight of his coaching career he can be an asset to an associate nation like Nepal with homegrown talents. “The calibre of players here has been much better than what people are thinking. I think I might put my hands up being one of those, there is no question about the talent of the boys here in terms of skills. What we need to do is give them more information and opportunity for that skill and talent to grow” said Whatmore who visited Nepal earlier this year on a short stint upon an invitation from B2F (Bat & Ball Foundation).
Lalchand Rajput
The 56-year-old is a former Indian cricketer who was recently released by the Afghan national team. He played for India in two Tests and four ODIs from 1985 to 1987.
Rajput comes with a real winner’s attitude just like Dave Whatmore but more adept to modern demands and proven track record in administration skills.

Rajput was coach of Under-19 Indian Cricket Team during the tour of England. He managed the winning Indian cricket team in the Twenty20 World Championship 2007 held in South Africa. Rajput also was the coach of the Mumbai Indians in the inaugural season of Indian Premier League 2008. In June 2016, Rajput was named as head coach of Afghanistan’s national team, replacing Pakistan’s Inzamam ul Haq.
Afghanistan earned test status under his helm before being released at the end of his contract. He is available and maybe Nepal can get the most out of him with his wealth of experience and connections in India.
Charles Burke
Burke is a former head coach of the Hong Kong National Men and Women’s cricket teams. He took over the post in May 2010 after completing 2 years with the International Cricket Council (ICC) where he was a development officer for the East Asia Pacific region.

It has been a successful time at the helm of Hong Kong with the u19s Men and Women both making the semi finals of the ACC tournaments, the Women won the T20 ACC tournament in Kuwait and the Men won promotion to ICC Pepsi World Cricket League Division 2 after winning the Division 3 event in January 2011.
The former WACA A grade bowling all-rounder is a Cricket Australia Level 3 coach and has enjoyed success with under-age representative teams in Western Australia over the years in various roles as coach, coaching officer, and bowling coach.
Needless to say, Burke is a very exciting prospect with plenty of experience in managing an Associate nation. He also flew to Nepal in 2015 to feature in Philip Hughes Memorial match.
Chandrakant Pandit
The 55-year-old was one among several young players in the mid-80s who were in the running to take over the gloves from Syed Kirmani with an experience of 138 first-class matches for teams like Assam, Madhya Pradesh, and Mumbai. The five Tests he played, he was selected as a pure batsman, although in the two Tests he did keep in was when Kiran More was unavailable on the 1991-92 tour of Australia. He showed his skill by taking eleven catches. Pandit’s attractive batting style saw to it that for some time he was a regular member of the Indian one-day side.

After his international career ground to a halt, Pandit joined Madhya Pradesh as a professional and enjoyed some good seasons with the bat. He went on to become a successful coach, guiding Mumbai to two consecutive Ranji Trophy triumphs in 2003 and 2004. The 55-year-old then joined Maharashtra before returning back to Mumbai and leading them to two consecutive finals in 2015 and 2016.
A highly successful coach just might be a like to like replacement for Pubudu Dassanayake albeit with new ideas and visions. And maybe he can provide a new tonic to Nepal’s batting woes.
Know your Opponent: Tanvir Afzal
The fifth overall bowler in the rankings of top wicket takers in ongoing ICC World Cricket League Championships. He scalped 13 wickets in only seven matches he has played in the WCLC. He is the most potent fast bowler of the league so far along with Scotland’s Alasdair Evans. His economy of fewer than 4 runs per over is impeccable and unreal for a fast bowler who bowls all the important overs for his team.
The right-arm fast bowler’s career best bowling figures of 5 for 17 came against Namibia in a very first set of WCLC matches at the start of the league on 15 May 2015. Hong Kong won that match by 8 wickets.
Afzal’s best batting performance of 73 runs and 3 wickets in the same match against UAE on 18 November 2015 has been so far the highlight of his successful WCLC campaign. Coming in at 159 for 6 after 37 overs, Afzal turned the match in Hong Kong’s favor as he propelled the total to 282 for 8. He smashed seven sixes and one four in his innings and also formed a 101-run, eighth-wicket stand with Aizaz Khan, who contributed a 31-ball 37. Hong Kong won the match by 136 runs.
A former Pakistan U-19 player, Tanwir Afzal played his first full-fledged Hong Kong match in 2012 at the Asian Cricket Council Trophy Elite and took over the reins from Atkinson in 2015, just prior to the World T20 Qualifier in Ireland. The 29-year-old is a steady pace but is also capable of explosive batting cameos, such as the time he struck 30 runs in an over on the way to 56 off 22 balls against Scotland in past.
Story of the Week: Suicide bombing during a match in Kabul
A suicide bomber detonated his explosive vest at a checkpoint outside a cricket stadium in the Afghan capital of Kabul on Wednesday while a T20 match was underway, killing at least three people and injuring seven more. The Afghanistan Cricket Board confirmed the blast outside the Kabul International Cricket Stadium.
Officials also said all players participating in a Shpageeza Cricket League match within the stadium and the spectators were safe. They added the match was stopped immediately after the blast. The league is a professional T20 series that was started in 2013.
Cricket has become one of Afghanistan’s most popular sports and the national team, many of whose members have trained in India, has become increasingly successful, raising the profile of the game. A small number of foreign players are taking part in the Shpageeza Cricket League.
Pakistan’s Sohail Tanvir, Babar Azam, Umar Akmal, Kamran Akmal and Abdul Razzaq, Zimbabwe duo Sean Williams and Hamilton Masakadza, as well as Bangladesh pair Tamim Iqbal and Imrul Kayes, were among the stars purchased during May’s player auction.
Infographic of the Week:
The fans from the 2000s will know what a brutal player Marcus Trescothick became in a very short span of time. And if in case you thought he retired long ago, which he did from internationals but not domestics, here’s a look at his numbers for Somerset County Cricket Club still going strong in first-class cricket.

Quote of the week:

“For Afghanistan and Ireland, the first years in Test arena won’t be a smooth ride. And this is when they will need to remain patient and, more importantly, the rest of the cricketing world too.”- Jigar Mehta, the cricket writer from Firstpost.com.

Article of the week: Cricket’s future belongs to all-star Twenty20 clubs, not countries
The Indian Premier League’s bumper broadcasting deal is more lucrative than anything the international game can muster. Domestic cricket, forever a sideshow, is now the headline act. The question is not whether its audience will continue to swell, but how big a stage will be left for the international game ponders blogger ‘Stumping up the Cash’ on The Economist:
Click for Full Article

This Article was first Posted On September 19, 2017 on wicketnepal.com By Rajan Shah