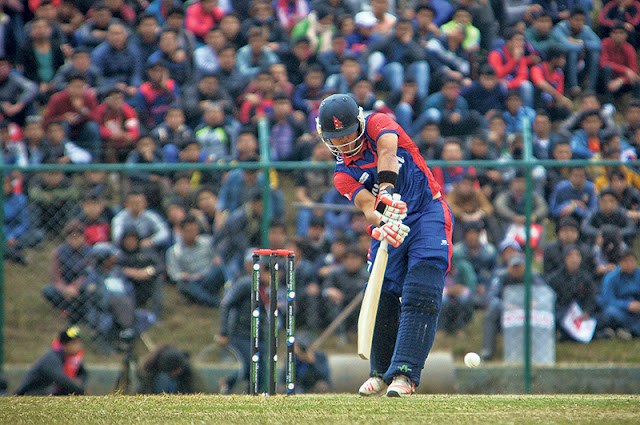 Nepal is the proud owner of some amazing, albeit unofficial, world records outside Test cricket. Winning a one-day match in only two deliveries and a bowler taking all 10 wickets in a match are the two everyone remembers, perhaps only after ‘Buddha Was Born in Nepal’.
Cricket has enormous potential in Nepal. But the problem is some members of our cricket advisory committee think that an outside chance to go on a trip to Uganda or Bermuda or Oman is a better deal than more frequent trips to Melbourne Cricket Ground (MCG) or Lords or Eden Gardens.
The three musketeers of Nepal batting have always been Paras Khadka, Gyanendra Malla and Sharad Vesawkar. It will be unfair, nay criminal, not to see them don the whites at one of aforementioned Test venues.
ICC keeps a vulture’s eyes on our progress, on and off the field. But the administration is not the only problem. There were two things the newest Test nations, Afghanistan and Ireland, got right: batting
and fast bowling. In Boyd Rankin, Ireland even managed to give England a Test player. In fact, in both these departments, the Netherlands, Hong Kong and Namibia are better equipped to make that next leap to Test status, ahead of Nepal.

Nepal should emulate Afghanistan and Ireland, not because they did it but it is the right thing to do.

As the tradition goes, Nepal as an Asian country struggles to find proper pace bowlers. Pacers do not usually survive for long anyway, as they turn into pedestrian seamers or their career is cut short due to injuries, as the example of Mehboob Alam and Binod Das suggest. Batting is something Nepal is more familiar with, despite existing problems. It should improve too after two of the most potent bowling attacks in the Associate circuit are removed from the picture.
Running on empty
Nepal right now has no help from administrative body, no domestic cricket (expect ever-expanding multi million private leagues) and no good support staff (technical or analytic).
Nepal should emulate Afghanistan and Ireland, not because they did it but it is the right thing to do. The batting order should be led and revolve around the three mainstays of Nepal for past decade. Batting is complicated, but it is less complicated than we make of it. It is the teams that decode the art of batting that make quick progress; dynamic batting set Afghanistan and Ireland apart from other Associates.
Nepal already has a potent bowling attack despite lack of proper fast bowlers. But let us focus on our batting. Take any successful team in the world, and it has dependable openers.
Nepal can start with Sharad Vesawkar and Gyanendra Malla. Vesawkar has opened in past. There is no denying that he has done well at number three, but he could be as useful at the top of the order.
Nepal has struggled to find a proper opener ever since Subhash Khakurel’s dip in form. It is time to plug that gap and let two of the three most experienced batsmen take advantage of weak bowlers in the Associate circuit right now.
The basic rule of batting is to have the most prolific batsman at the crease as soon as possible. Dropping into the sheet anchor’s role or taking an attack to the opposition, capable of scoring a century against any attack on any surface against any opponent—there are many responsibilities for your best batsman, and there is no one better at it than Paras Khadka. Bat him at three, show the intent. It is essential for Khadka to bat at number three for a couple of reasons: he will score fast and he will lay a foundation for batsmen lower down.
Any experience of batting with the big-three will be inspirational for guys like Dipendra Singh Airee, who can bat at four, where he won the man of the match last time he played for Nepal. Nepal needs to eliminate the jamming up of run rate in middle overs by identifying the naturally aggressive batsmen with an eye for a boundary to complement the re-vitalized top three.
Aboard Gulmi Express
Binod Bhandari’s inconsistent form and limited technique have made him predictably inconsistent. Associate bowlers know how to bowl to him. His numbers, especially overseas, are bad.
Nepal can use someone like Saurav Khanal, who made a comeback in domestic cricket with a bang, to breathe life into that rather stale middle-order. If Nepal is looking for someone with international experience and flair, Sompal Kami can come handy. He is Nepal’s lone fast bowler but his idol is Sachin Tendulkar. That he changed his jersey number from 62 to the iconic number 10 tells about his love for batting.
‘The Gulmi Express’ has a proven track record too: an international world record batting at no 10, good strike rate, ability to clear fences and two centuries in consecutive days in domestic cricket for Kathmandu district. Sompal has scored more runs in boundaries than Binod Bhandari in Nepal’s international T20s. Think about it, had Nepal limited Khadka to bowling in his early years, he would not have been the player he is today. Nepal should not kill a potential Ben Stokes in the name of finding a James Anderson.
Once Nepal settles its top order, and aggressive middle order with likes of Airee, Khanal and Kami, rest of the spots goes to bowlers and can be managed as per local playing conditions.
Sagar Pun’s all-round skills, more importantly, his fielding and off spin, are crucial. But Nepal also desperately needs a specialist wicket keeper; Bhandari is a makeshift. In conditions like the Netherlands or Namibia, it will be a demanding job. Dilip Nath can be given more chances at number seven or eight, as there is no better place for young batsmen to get experience without any pressure. Brendan McCullum was not always the world beater when he first started his career.
Nepal will have two to three seam bowling options in Khadka, Kami and Airee in top seven. Adding Sagar Pun in lower middle order will give Nepal variety and allow it to go with three spinners in Basant Regmi, Shakti Gauchan and Sandeep Lamichhane, or even with an extra seamer. Again, Lamichhane will have a great opportunity to learn from the likes of Gauchan and Regmi.
All in your head
All these changes will not guarantee success. But Nepal needs to get over making the same mistakes again and again in four-year-circular ICC world league events. Nepal is not going to get new quality players anytime soon and needs to make most of what it already has. Subtle changes in strategies and approach can make big difference.
The greatest batsmen of all time, Sir Donald Bradman, had poor eyesight. But he had this almost supernatural hunger for runs, which made all the difference.
To its advantage, ICC’s fondness for Nepal has grown in recent times despite its administrators lacking vision and always putting their vested interests above the sport. Now if only our batting can be improved, our batters would be a handful for the depleted Associate bowling line-ups.

THIS ARTICLE WAS FIRST PUBLISHED IN REPUBLICA DAILY ON SEPTEMBER 9, 2017.