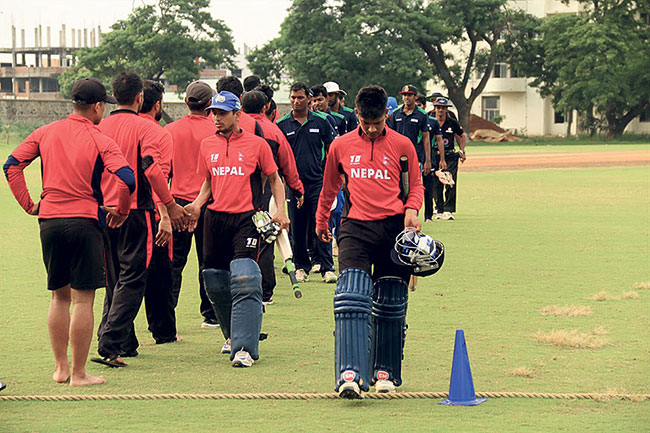 by Rajan Shah
0 comments
In absence of top-flight domestic cricket in Nepal, the player production process for the national side has been blocked.
2015: Anil Mandal was dropped from the national team after an unsuccessful 2014 ICC World Cup qualifiers in New Zealand. He then went on to score two centuries in a subsequent senior one-day domestic competition, taking his tally to three domestic hundreds, a national record. This resulted in his comeback for the first set of ICC World Cricket League Championship matches against (and in) Scotland. He scored a century in his first outing after the comeback.
2014: A young Aarif Sheikh achieved an amazing feat while bringing a domestic one-day trophy to Birgunj. He won the man of the series for his 256 runs and 11 wickets in the tournament including a coming of age half-century in the final, chasing a stiff target against the APF. He was called for the national team to feature in ICC WCLC Division III in the same year.
2013: Jeetendra Mukhiya was Nepal’s hero in ICC World T20 Qualifiers in 2013 and subsequent World T20 in Bangladesh, winning a man-of-the-match award in each of these tournaments. He was first identified by then-coach Pubudu Dassanayake, bowling rippers for Birgunj in that year’s one-day competition.