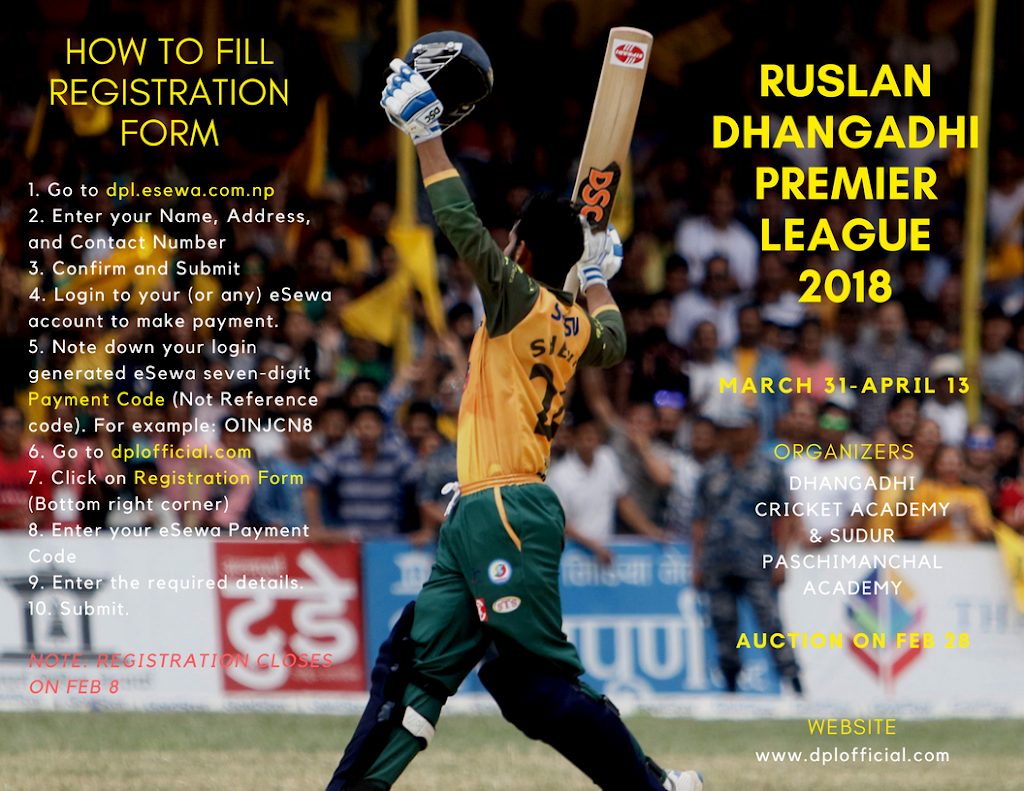 For the last eight years, Dhangadhi has been continuously in the limelight at least once in a year as all forms of media — be it newspaper, television, radio and online – would extensively cover an event in Dhangadhi. The community in the far-western town that started convening local cricket tournaments has now been able to organize the Dhangadhi Premier League (DPL), a tournament with international recognition.
Starting from Sudur-Paschimanchal Academy Cup (SPA), a tournament where colleges from various parts of the country participated. It grew into a Dhangadhi Premier League, with full-fledged franchises inviting international players from various countries.
Cricket is not a summer game. Neither fan, even in Test nations as well, are fond of watching a cricket match in scorching heat. However, Dhangadhi, which is described by weather experts as one of the hottest places of Nepal, is not only hosting a 17-day cricket tournament in early April but also getting huge support from cricket fans.
The numbers are startling as an average of 2,500-3,000 fans is attending the league phase games in this small town. Nonetheless, the opening match between home team Chauraha and Kathmandu Goldens easily surpassed the capacity limit of 7000.
Neither had big attractions like Paras Khadka, who is leading Biratnagar Kings or Babar Hayat kind of familiar name in their squad. “I was taken by surprise when I saw the people of Dhangadhi accepting DPL with open arms even in the brisk of summer. I have to say, the average crowd even during the league matches has been encouraging,” said Subash Bahadur Shahi, the President of Dhangadhi Cricket Academy, who envisioned tournament like DPL back when he started the SPA Cup in 2010.
As the support of fans becomes a most important aspects of any sporting event, the facilities provided to them is no less than remarkable to help Dhangadhi establish as cricketing hub. Birat Rayamajhi, an iconic representative of fan and now a cricket commentator who probably has the oldest memory of cricket events held in Dhangadhi believes Shahi and team have always gave fans top priority.
“There is a giant LED screen now, a digital scoreboard; parapet with shades, food and drink stalls has made sure for the spectators are in for a great time. This edition of DPL has been no less than any top quality event there can be,” said Rayamajhi, who also heads cricket website wicketnepal.com and hosts a weekly cricket show on TV. The contests for lucky winners from the fans purchasing tickets and special prizes for catching the ball in crowd hit for a six by batsman has also helped keep fans involved and glued to the matches.
The inclusion of foreign players, as popular as the UAE captain Rohan Mustafa who admitted that the love of fans is always more worth it than anything to be here and play in front of them. Playing for home team and defending champions Chauraha, he already is a crowd favorite. He has been seen flocked by Dhangadhi’s cricket crazy fans before taking his team bus for hotel asking for autographs and selfies. The local player Surendra Chand said that the media coverage as well as the technical part and overall quality of the game have grown over the years.
Fans are crucial in driving any tournament to a resounding success. Developing a unique local identity in cricket culture is something important that DPL and Dhangadhi managed to achieve in the last couple of years. There were times when fans would run into the ground and pitch hurling the barricades after every match used to get over. That has changed over the time. Now they wait in queue to get out of the ground when a match is over.
Dhangadhi Premier League is a rivalry between cities whereas the rivalry within city was also first tried here in Dhangadhi itself with the preceding tournament Dhangadhi Cricket League. It was the first tournament in Nepal which introduced auctions and franchise cricket in the country. The winners of that tournament Team Chauraha in 2016 went on to represent Dhangadhi in DPL. There are still fans in DPL who are against Chauraha even in Dhangadhi due to that rivalry within the city.
All these fans pay good money to watch their favorite players’ skills in Seti Zone Police Ground once every year. Before TU Cricket Ground became more culturally ticket-buyers to watch matches, it was Dhangadhi that implemented ticket-rates of different amount and spectators paid to watch those games.

Nepal has seen many T20 tournaments in last decade or so, but Dhangadhi has managed to create their own cricket culture that helped them to be known as ‘the city of cricket’ in present scenario.

Scenes like local kids wearing shirts imprinted Sompal [Kami] and chanting ‘Babar-Babar’ has become a common sight during the tournament in this far-western town.

THIS ARTICLE WAS FIRST PUBLISHED ON MYREPUBLICA.COM ON APRIL 7, 2018.