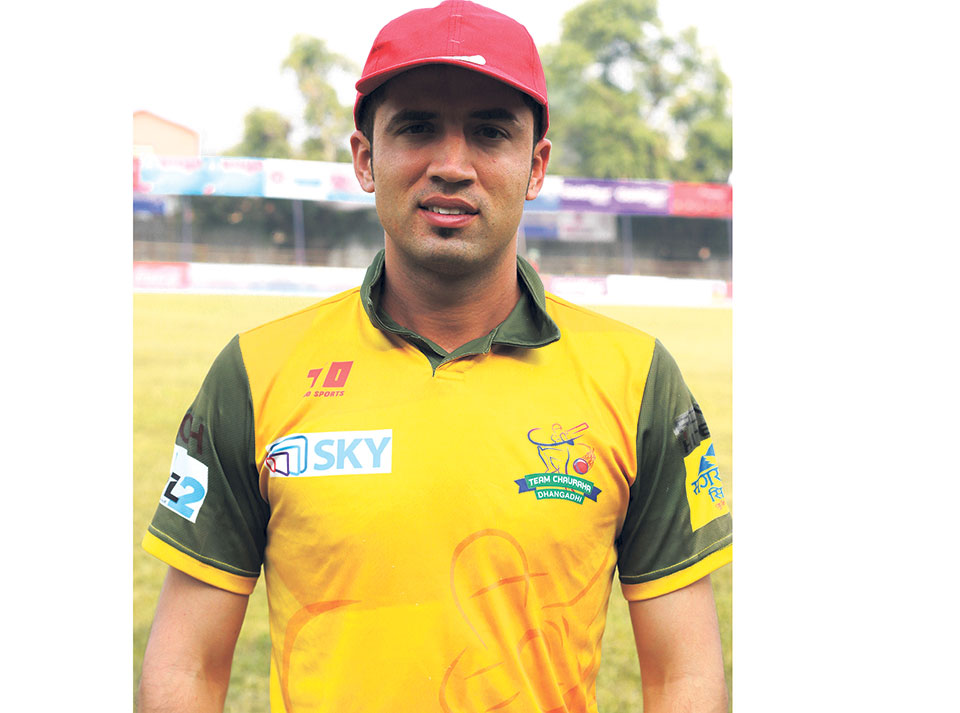 The United Arab Emirates skipper Rohan Mustafa is in Dhangadhi, Nepal representing home team Team Chauraha Dhangadhi under the captaincy of Sompal Kami. It won a nail-biter eight-over per side match against Rupandehi Challengers by three runs to secure its place in the playoffs of the second season of the Dhangadhi Premier League (DPL).
Mustafa has been a vital cog in its lineup making runs and picking up wickets too along with the ocean of experience he has in cricket to ensure the defending champions Chauraha make it to the final four.
“I am enjoying every moment here. Even when we play football or what we do in the ground as well. We enjoy our cricket. I think I am very happy to be part of Team Chauraha Dhangadhi,” said a happy Mustafa, who is very down to earth and open to photographs or questions whenever someone pulls him off to have either of one.
He added, “The owners are very good guys. We had some dinners together. They are quite good persons more than I expected actually. I will be very happy to come again and be part of the Chauraha team.”
Chauraha is owned by Raj Shrestha, the local businessman, who has made sure the guests from other nations are having a good time in Dhangadhi.

Sandeep Lamichhane is a great talent playing in the IPL. In my point of view, Nepal will get more such talents. Nepal has four years now, it is important to bring more youngsters in.

It has also been a great learning curve for Nepal players like Sunil Dhamala and Shankar Rana to be at the crease in partnership with as big stars like Mustafa and Ashfaq Ahmed, the UAE opener who is the second overseas recruit for Chauraha. To everybody’s surprise, Mustafa has been very vocal about the batting talents that Nepal possesses. Successful batting is something that doesn’t get associated with the Nepali cricket given the track record of bowlers doing distinctively better over the years.
“To be honest, the talents here are outstanding. Especially in the batting lineup they are very good. But they need some good wickets. In these wickets, they will not learn anything. There has to be bouncy wickets and better batting pitches. And being honest, Nepal can be the next Afghanistan. They have loads of talents and very good batsmen,” said Mustafa given the dual nature of the Dhangadhi wicket where odd delivery sticks and stays low. However, he also remarked the fact that playing in such pitches is also a part of cricket you learn or get experienced with to make you a better cricketer. He said, “If you play in good wickets, you have to play in these kinds of wickets as well. It is good for us. It is good for our experience.”
There is distinct cricketing culture in two countries as well. Mustafa emphasized on Nepal to be the next Afghanistan in the world cricket due to its unmatched passion and love for the game. “Both are different countries. Nepal has fan and followers. Nepal is a country where everyone plays cricket in the street or the academies whilst the UAE is a country where it is very hard to play cricket. Everyone have jobs. We have to manage the time very hard. The main thing on how Nepal cricket will grow is the support they get from whole Nepal,” said Mustafa startled by the amount of cricket people from Dhangadhi play.
Sweeping aside the controversies that emerged from the finals of the ICC World Cricket League Division Two, Mustafa also praised the talent of Nepal’s 17-year-old leg-spinner Sandeep Lamichhane. He also seemed convinced that Nepal will have more if such kind of extraordinary talents who will bear the flag of Nepali cricket in different part of world.
“Sandeep Lamichhane is a great talent playing in the IPL. In my point of view, Nepal will get more such talents. Nepal has four years now, it is important to bring more youngsters in. But as I said before, they have to have good grounds not these wickets to develop further,” said Mustafa concentrating on the fact that Nepal needs to bring in more number of youngsters in the national foray.
Nonetheless, the UAE is open to play a bilateral series in Kathmandu much depending on official tie up between the cricket boards of two nations.
“All depends on the cricket boards of the two nations but it will be really good for the UAE cricket to come in Kathmandu and play few matches as both have ODI status and it will be a very big series,” said a pumped Mustafa, who also want to visit the Himalayas in his next trip to Nepal.

THIS ARTICLE WAS FIRST PUBLISHED ON MYREPUBLICA.COM ON APRIL 9, 2018.