A thousand dreams with Binod Das 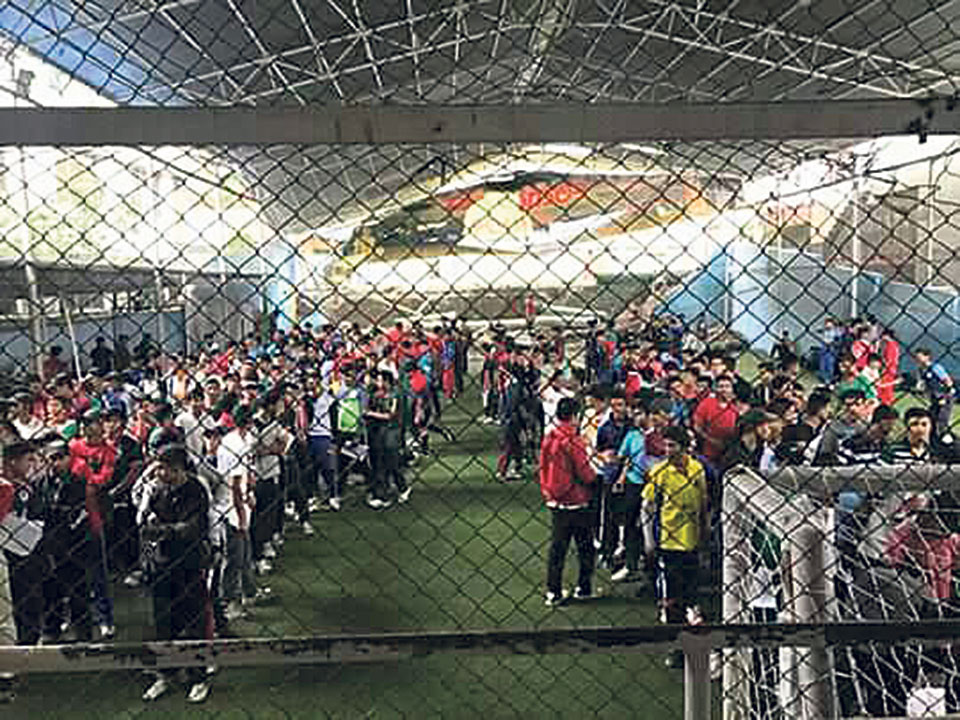 A thousand dreams with Binod Das

More than a thousand teenagers from across Nepal reached the Velocity Arena in Kathmandu on August 13 with hopes and dreams to represent Nepal in the international arena. They appeared in the first phase of open audition to impress a host of former Nepal cricketers and current coaches to make to the second phase of 103 players.

A list of 30 was shortlisted by Friday. The list that includes talented players, as quoted by the national U-19 head coach Binod Das, who can go on to represent the national U-19 team for upcoming quadrangular tournament in Kolkata’s Eden Gardens against heavyweight teams like India, the newly-promoted Test nation Afghanistan and the National Cricket Academy of India from September 9 to 20.

In the first phase of the closed camp, the shortlisted 30 players will be joined by other 14 players from last U-16 national team which won the ACC U-16 Eastern Region Championships in 2017 under the captaincy of Rit Gautam. A final list of 12 players will be selected from the above 44 players who will then join seven players from last U-19 national team excluding Sandeep Lamichhane, Rohit Kumar Paudel, and Dipendra Singh Airee, who are still eligible for the U-19 team. A second phase of the closed camp for 19 players will be conducted to finalize the squad of 14 players who will travel to India in September.

Excerpts
Was the response expected or were you pleasantly surprised by the numbers that turned up?
It was surprisingly pleasing. You got to be ready in these cases for players who might not be up to the mark or won’t cut at this level but we wanted to put an equal opportunity out there. I can say there are at least two players out of thousand who will directly make it to the final camp. So, I think the purpose is served. Out of 1068 players, a couple of names that no one would have heard of might go on to represent Nepal at the highest level. We might have selected 30 today but we still have few backup players who can always come up to cover if required. We are even ready to include few more players during matches. We might be wrong on our judgment and we don’t want a certain talented and deserving player to suffer due to that. So, you never know, the final squad for first camp might exceed 44.

How exciting were talents that came for trials?
Most of us know our cricket team’s continuous struggle with the batting at any age level. But from what I have observed from last two-three years is batting looks promising as well. Yes, we saw them in nets, understandable, but some of them were very correct technically. It was not a 6-ball or 8-ball trial. We gave them enough opportunities to impress with 10 minutes to 20 minutes of session until we were convinced. We used different balls and bowlers in different nets. From fast bowlers to spin bowlers, we judged them extensively. It was thorough trial. It is a very encouraging time. I am happy to pull it off. I requested different coaches to come and participate for the cause. But I still feel we might have missed on few talents. You never know, one might be having a bad day and could not do justice to his talent in the trials. But again, I do think we get hold of many aspiring talents.

Did you see any change in attitude or approach in young players due to the rising craze for T20 cricket in Nepal?
I think the technique remains the same. It is all about your mindset. You attack in T20s looking for boundaries whereas Test cricket is all about survival. James Anderson is a terrific Test bowler but when he comes into the one-dayers he fails to find the same recognition. Same can be said for someone as a new player as Kuldeep Yadav who looked lost in Tests despite doing well in limited overs. Same goes for batting approach. You need to know when to attack or take a backseat. It is all about understanding the phases, nothing to do with technique which remains same in all formats. It is up to your mindset.

Where are the funds coming for all these (trials and camps)?
From nowhere right now. It is not a huge investment though. For now, I have been managing daily food expenses for coaches and volunteers. And thankfully, the coaches have not asked for any other favors. This indoor arena (Velocity) also did not charge us anything which was very helpful for me. But yes, I have not received any budget from anywhere. Be it International Cricket Council (ICC), which I have already emailed to, or Nepal Sports Council (NSC) or the government.

How difficult is it going to be to make that cut from the available talent pool for the final squad?
It is very exciting times. As you know, we are not even including the three senior team members (Airee, Paudel and Lamichhane) who are eligible for the U-19 team. It is probably the first time that we will be doing this (not including the senior team members despite being eligible). We have good bench strength right now. Obviously, they won’t be as good as them but if we don’t give opportunity to the new guys, we will never know. We need to give them exposure and experience. And the other seven U-19 players will also have to fight for their places.

Yes, the previous players will have little bit of privilege for ‘being there done that’ experience from past and will directly enter the final camp. But they still have to compete with the new players that came from trials and U-16 players to secure place in the final squad for the quadrangular series. It is going to be tough. It is an open contest between 51 players right now. My personal understanding of the U-19 cricket is regardless of how they perform at this level. For me, the ultimate aim is to see them in the national senior colors. If they are good enough to represent the country in the senior arena, then it is worth to give them one, two or even three chances in the U-19s. For me, more than who is in or who is out, the aim is to see players perform at this level and go on to represent the nation at senior level.

From players and team’s performance to BCCI’s positive interest, and with no board in place, how do you manage all of it?
It is all about taking an initiative. Even for this quadrangular, we took the initiative in the last tournament. We have played against India twice or thrice in recent times, and every time we have played against them we have put up a decent fight, that too, against their full strength sides, apart from the World Cup match in 2016. We also won one game. It all comes down to performance. What happens next is we can put up a word to Indian board or management for further matches. I went on to speak with Rahul Dravid.

We requested that if we can get an opportunity to play somewhere in India, the experience is only going to help our cricket grow. Thankfully, he did manage to put up the word to higher hierarchy as well. I really hope if we can do well, it can be continued for future tours as well. Even if there is a board in place, this is the way to go… you take the initiative, talk to them, you put forward a plan, and ask them for help. If you have a rich neighbor why don’t you build up a rich neighborhood? India would love to help us. Pakistan will do the same, and we can remember how Bangladesh helped us last year. So you need that personal initiative. We are lucky that ICC is supporting us in a big way. But for these things to take a big shape, we need to have a board.

Players are without salary for 19 months. What is the scenario for coaches?
Players are salary-less and coaches are, in a way, jobless. In terms of monetary transactions, we do not have any. We are only asked by ICC and ACC to come into the scene for the tournament and prepare the team. That’s the scenario for us. So, yes, it is not very ideal scenario to be in. But since we all love this sport and have been involved with it for so long, we all try to manage by working in colleges or academies, or other private businesses. We all have experience of 7 to 8 years, so why not use it. For me, whatever I have learned in my life, whatever I have made in my life is due to cricket. If it wasn’t cricket, I wouldn’t get a job.

So far, I have been able to make a living out of cricket. Therefore, I have no problem giving my time for national duty. It is a kind of passion for me and I am sure it is same for other coaches too. But we believe it will change over the time. Right now, we do not have the system. The players are playing without pay. We all understand the situation and we all believe it will change because things can’t go worse than this. If we survive these worse days, better days are ahead where players will be paid and coaches will be taken care of. For me, I am paying off my debt for cricket.  Hopefully, that debt will be paid off soon and I will start earning again.

How is the excitement of ODI status among young players?
We have been on the rise since the World T20 in 2014 in terms of performance. But we shouldn’t look only one-side of the coin. The other side of the coin is we are struggling to manage cricket in the country. The numbers are growing every day. Maybe we had 1,000 kids picking up cricket during World T20, but today we have 10,000 players. But are we making sure they stay interested in cricket? Other sports are not active like cricket in country right now. If football was on the rise, cricket would have struggled. Kids follow the sports whichever is shining brighter. What if we start winning medals in Asian Games?

Kids are attracted to those kinds of things. It is all about how we manage sports in this country. Cricket is blessed for time being but if you don’t find way to promote, it will perish. Cricket is getting glamorized. Sandeep Lamichhane has inspired youngsters. All these things have happened in the right time. We now need a board to build cricket. These four years of ODI status is going to be very crucial for where we will stand for Test status.

How much influence Lamichhane has on the youngsters?
Previously, most players used to bowl off-spins. Now, we have all of them bowling leg-spins. In fact, there is a 12 or 13 years old kid who bowls amazing leg-spin. I hadn’t seen a 12-year-old bowling like that earlier. So, I am very excited that Lamichhane is inspiring these youngsters. I am
sure this 12-year kid will be around for long time from whatever I have seen of him in few days of trials.
I hope that he is as good as what I think of him. We might have been misled by few deliveries but what we saw in those few balls that he is very
talented.