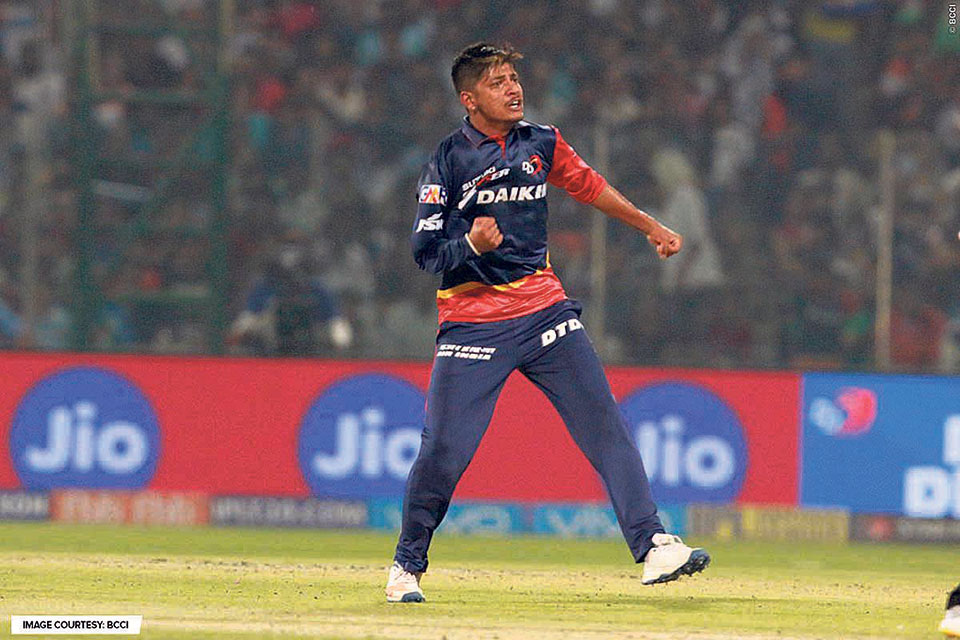 The world is at Sandeep Lamichhane’s feet as the wonder kid from Nepal’s Syangja district has already made a habit of breaking the internet back in Nepal every second day. From taking his first hat-trick in ICC U-19 Cricket World Cup in 2016 to being shortlisted in official ICC World XI squad to make his T20I debut in 2018, the journey for the 17-year-old wizard has been no less than a fairytale.

He is now all set to blaze the cricket world on fire in May 31 cricket event against the ICC World T20 Champions West Indies. He will rub shoulders with fellow leg-spinners: Pakistani legend Shahid Afridi and Afghanistan’s golden-boy Rashid Khan.

The wrist-spinner, who benefitted from high-profile mentoring by former Australian captain Michael Clarke, is currently playing in the Indian Premier League for the Delhi Daredevils. The support from the Aussie legend has been as crucial as his first academy or a coach he learned the craft to turn the ball.

Lamichhane was first spotted by then Nepal coach Pubudu Dassanayake in 2014. He was learning the trade at Campa Chaur in Chitwan in the cricket academy of Raju Khadka, Nepal’s first international centurion. He went on to represent Nepal in the 2016 U-19 World Cup in which he took 16 wickets as he never looked back.

In April 2016, Marylebone Cricket Club (MCC) toured Nepal. Hong Kong’s Scott McKechnie was representing the visiting team. It was that precise moment when McKechnie held high regards for the leg-spinner in the match and recommended the teenager from Nepal to be considered for HK’s franchise team Catalans.

“Sandeep had played against the then Kowloon Cantons Captain Scott McKechnie and Scott recommended him as a budding player from an associate nation for the first edition of the HKT20Blitz,” said Urvashi Sethi-Sodhi, CEO of Kowloon Cantons.

Lamichhane’s appearance for Catalans shoot his limelight to moon under the watchful eyes of former Australian captain Michael Clarke, playing for the same team in the tournament. He even tipped him to be the next Shane Warne.

Same year, Clarke then took Lamichhane under his wing and took him to Australia where they played club cricket together for Western Suburbs Districts Cricket Club.

Moving ahead with bulk of experience in a very short career span, the wrist-spinner claimed 17 wickets in six ICC World Cricket League Division Two matches in Namibia earlier this year in February and then followed up with 13 wickets in the ICC Cricket World Cup Qualifier in March to help Nepal finish eighth and with it earn ODI status until 2022.

Lamichhane then became the first Nepal player to be picked in the IPL 2018 auction when he was signed up by Delhi Daredevils. He justified his selection when he returned figures of one for 25 on his debut against a Virat Kohli-led Royal Challengers Bangalore.

His IPL participation will be followed by a match for ICC World XI on May 31 when he will make his official T20I debut. He will then join Caribbean Premier League (CPL) outfit St Kitts and Nevis Patriots for the forthcoming season.

January 30: First hat-trick and 5-wicket-haul vs Ireland U-19 (First Player-of-the-Match award) in ICC U-19 Cricket World Cup in Bangaldesh.

May 27: Sandeep Lamichhane makes debut for Kowloon Catalans in Hong Kong Blitz. Kowloon Cantons, one of the four franchises in the three-day tournament of first edition of the event organized by Hong Kong Cricket Association.

September 24: Played for Western Suburbs Districts Cricket Club in Australia after an official call up by Michael Clarke in Sydney grade cricket 2016/17 season.

July 25: Made new Nepali record for Most Wickets in an International Tournament (24 wickets in 6 matches) ICC U-19 World Cup Asia Qualifiers in Malaysia.

May 16: Sandeep Lamichhane added to the ICC World XI for 31 May T20I against the Windies at Lord’s.