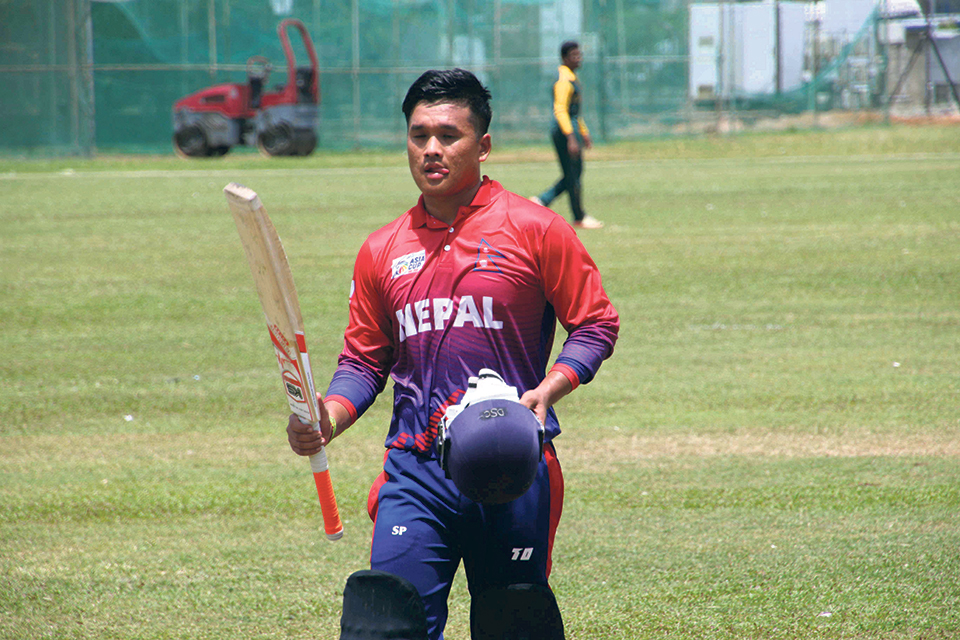 Sagar Pun made a triumphant return to the national duties scoring 92 runs from 83 deliveries, including eight fours and three sixes, to help Nepal win the second practice match in Sri Lanka against Bloomfield Cricket Club on Friday. He was not done as he backed up his stellar batting performance with solid bowling display picking up a three-wicket-haul in an eight-over spell.

All in all, it is good news for the Nepal cricket team for the upcoming Asia Cup Qualifiers in the absence of middle order experienced stalwart Sharad Vesawkar. Vesawkar has been rested for four weeks due to a finger injury he suffered in Nepal’s first ever one-day international match against the Netherlands in Amstelveen. Pun can be a shoe-in if he can continue his golden form off late in Nepal colors.

Pun has been in a great form recently. He top-scored with bat in the recently concluded Malaysian Premier League apart from chipping in a few wickets. He was adjudged the man-of-the-series in Nepal’s only 50-over event, the Inter-Provincial Prime Minister Cup. He registered three centuries, opening the batting in the last two tournaments. However, his best performance for Nepal national team came today in the middle order. In fact, he came in the 20th over against the semi-new ball.

Sagar Pun is a type of player who has always played a quick cameo whenever needed. He is good at being on supporting roles like he did today for Dipendra Singh Airee who scored his first century in national colors. A partnership of 185 runs between the two took Nepal’s score to 323 runs in 50 overs, laying the foundation of a 176-run win.

Pun always starts his innings confidently, but like other Nepali batsmen, struggles to pace his innings. He is not someone who likes to set the pace of an innings. Probably, that may be the reason opening the batting never came ‘natural’ to him.

It will be difficult to judge a player for the runs he scores due to the little number of matches most Nepali players gets to feature in a year. Strike-rate might be able to give us somewhat a truer picture.

This is a rough data for Pun’s competitive tournaments in the last two years. Going back a year further, his innings of 45 runs in the middle order against the Netherlands in 2016 at the VRA cricket ground, with skipper Paras Khadka, laid the foundation of another memorable Nepal win in overseas conditions.

At times, it seems like two ‘Sagar Puns’ are playing in Nepal — one who struggles to score freely on top of the innings whereas the other who is consistently successful in the middle order — as the common statistical pattern reveals.

Playing in a certain position may or may not shield a player from failures, but it leads to misunderstanding of his capacity as a performer.  Pun has been successful in the middle order by contributing match-winning partnerships. But a series of failed outings while opening the batting eventually paved his way out of the team before the ICC World Cricket League Division Two.

Pun is not the first middle order batsman who has been asked to open for the national team before eventually losing his spot. Naresh Budhayer before him and Dilip Nath after him have met the same fate. And, currently, Anil Kumar Sah is in a similar position. Sah also did most of his batting in the middle order for U-19 team. He has been tried as an opener for the national senior team.

In between, senior and experienced Gyanendra Malla stepped up to take one of the most vulnerable spots in the Nepali team. Malla did not have much success either. He silenced his critics somewhat by becoming Nepal’s first-ever ODI half-centurion.

But this boils down to one question: Why can’t the decision-makers give opportunities to ‘true’ openers of domestic cricket like Anil Mandal or Amit Shrestha or Sunil Dhamala? It just might save so much stress of developing an opener from scratch for the national team.

To support the case more, Subash Khakurel had relative success in the opening position compared to many other batsmen Nepal has tried over the years. He became a household name. One simple reason may be — because he was an opener in the domestics as well as in the age-level teams. So it came natural to him. Poor form and subsequent injuries ruined him from becoming one of the mainstays in the Nepali batting.

There are many other factors like technique, form, discipline, fitness, and luck that comes into account while selecting a particular player. Players like Sompal Kami, Bhim Sarki, Aasif Sheikh, etc represent natural talent in batting but they are yet to meet their true potentials. But surely, doing the most obvious things — like asking a natural opener to open the batting — may be the way forward from here. That may give a hope that Pun and other batsmen continue their good form for the national team.

THIS ARTICLE WAS FIRST PUBLISHED IN REPUBLICA DAILY ON AUGUST 25