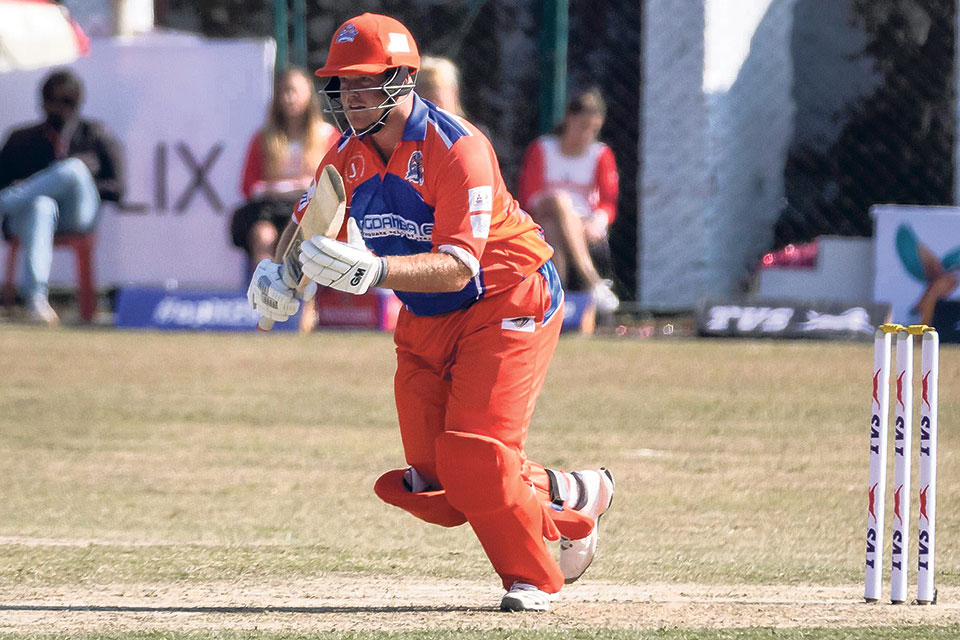 The wickets of Tribhuvan University international cricket ground has always received a load of flak from the cricketers, coaches, experts and observers of the game in the past. The same trend continued in the first few games of the current season of Everest Premier League (EPL) being played at the Kirtipur’s most iconic place. Three strips have been used in this edition of marquee T20 event where barring three matches; the first batting team has not been able to cross 143 runs.

In the first match of the EPL, the first low-scoring encounter, Sunny Patel scored 20 runs from 15 deliveries batting first whereas the next best was 49 from 52 deliveries in a total of 104 runs scored by Gyanendra Malla. While chasing, Karan KC scored 36 off 19 deliveries whilst Paul van Meekeren’s 9 from 12 deliveries was the next best score. The partnership between KC and van Meekeren gave Warriors their first win of the tournament. Both the coach and captains of either side criticized the pitch, the center wicket of TU that was used for the inaugural match. “It is difficult to score even 110 runs in this pitch. The batsmen are struggling to score any runs, “said RajuBasnyat, the head coach of Lalitpur Patriots, after the match. “It was not the easiest of the wickets. I think most runs were scored off the pacers whereas spinners just had to put the ball in right places,” said ParasKhadka, the skipper of defending champions Biratnagar Warriors. However, the player-of-the-match KC, who batted with the strike rate of 189, insisted on believing in oneself than over-thinking about the pitch. “My coach always tells me, you are the best, you can do it. And I as a batsman just tried to play the deliveries on its merit than thinking too much about the wicket.”

The next day of EPL saw another low-scoring encounter in a morning 9:00 AM start when the pitch tends to favor pacers at start of the innings. “The pitch is sticky and I have been telling Paul (Stirling) since his arrival that he might not get the usual good wickets as per his likening,” said PrithuBaskota after their 11-run defeat against Patriots in first match of the second day in the left pitch (from the pavilion end). Baskota contributed 26 runs from 29 deliveries while putting up 132 runs chasing the total of 143 runs. In the same chase, the following batsmen BhimSarki and English George Scott scored respective 21 and 18 runs with a strike rate of more than 200 runs facing 9 deliveries each. Similarly, Patriots winning captain Malla further said the wicket to be slow and helping spinners during their batting as well as bowling innings. The Big Bash bound SandeepLamichhane was player of the match for his three wickets in a quality 4-over spell of bowling.

In the following match of the day played between Pokahra Rhinos and BhairahawaGladaitors, 431 runs were made in 40 overs of play. The South African Richard Levi set the tempo with his blazing 79 from 36 deliveries which included 7 sixes and 7 fours. Rhinos piled up a total of 215 runs where 87 runs were scored from the eight overs of spin bowled by Bhuvan Karki, Puneet Mehra and SharadVesawkar. The highest team total of the EPL record remained with Rhinos for only two hours as Gladiators chased down the impeccable total with the help of Ravi Inder Singh ’s unbeaten 125 runs from 60 deliveries which included 10 sixes and 8 boundaries. “I think Indian batsmen can adjust anywhere but Levi batted really well against the spinners,” said Singh after the historic chase. The hallmark of Singh’s batting was the shots being played all around the ground than being pre-dominantly an on-side or off-side player.

Levi further exhibited his class with 84 runs from 39 deliveries in the following match against Patriots. Indian batsmen Gaurav Tomar and JaikishanKolsawala neutralized the target of 167 runs provided by Rhinos within 16 overs. Tomar smashed 41-ball 82 which included eight sixes and four equally brilliant boundaries.

Tomar leads the EPL runs charts so far in the tournament with 196 runs in four innings followed by Levi’s 166 in three innings. The opening batsman from South Africa has played a match less but has registered most sixes with 16 so far, one more than Tomar’s 15. Dipendra Singh Airee of Tigers is in fifth place with most runs for a Nepali batsman in the league with 89 runs in three matches whereas Karan KC leads the six-hitting charge for Nepali batsman placed at fourth place for five sixes which doesn’t include two sixes he smashed in the super-over win against the Rhinos.

The right-sided pitch of the three, from the pavilion end, has seen the most consistent scoring with 160+ runs in each of the four innings so far. Tigers made 160 runs and it was chased by Kathmandu Kings XI whereas Rhinos scored 166 runs in the second game of the day 3 played in the same pitch before being chased down by the Patriots thanks to record (EPL) opening partnership of 129 runs betweenKolsawala and Tomar.

Two more low-scoring encounters were seen involving Biratnagar Warriors. On day four, Warriors had to do with a tie chasing the score of 84 runs put up by Rhinos before Karan KC bailed Warriors out twice in two matches with another player-of-the-match performance. Similarly, Warriors batting worries further slipped into more troubles getting all out for 91 batting in the same strip that has so far seen an average of 177 runs been scored in previous two matches (four innings). Gladiators finally ended Warriors’ unbeaten streak in EPL in the fourth time of asking. Gladiators lost all three matches against the defending champions last season during group stage, playoffs and final.

In the same strip, Kings XI was folded out for a total of 109 runs enforced by PawanSarraf’s coming of age bowling when he dismissed all three overseas batsmen, Kevin O’Brien, AanandSubramanium and Pradeep Sahu. Any doubts of pitch assisting the bowlers were cleared by Tomar and Kolsawala commanding the chase as Patriots won the match by 10 wickets in 10.3 overs. The only match the in-form Indian duo of Tomar and Kolsawala were not being able to cross five runs was the first match of the tournament when Patriots struggled to put up 104 runs on the board.

After the completion of nine matches of EPL, only two Nepali batsmen feature in the top ten of highest run scorers. Between the two batsmen, Karan KC has the strike-rate of 130 for his 69 runs in three games compared to Dipendra Singh Airee’s 97 in the same number of matches. Malla has the highest individual score of 49 for a Nepali batsman made in the first game of the tournament. 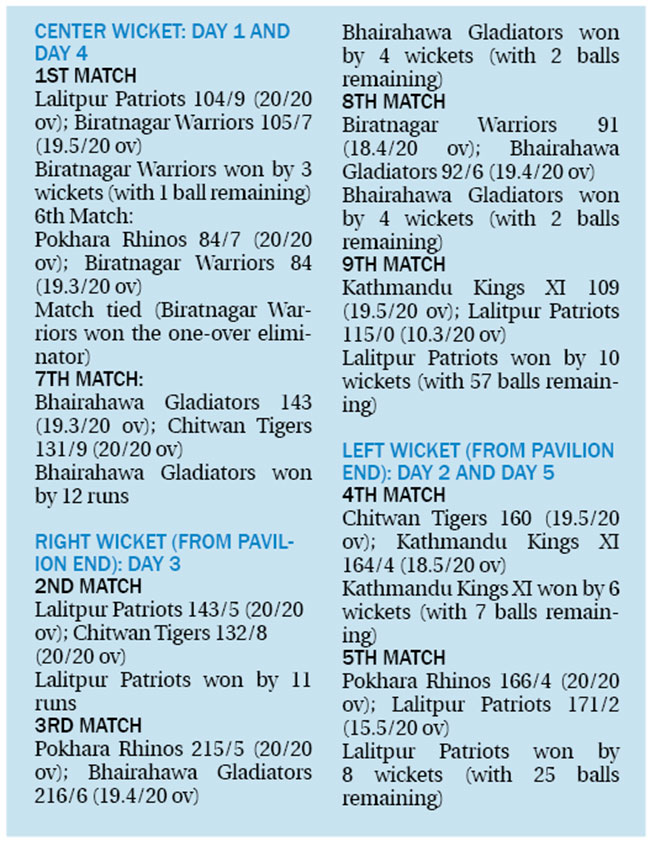 THIS ARTICLE WAS FIRST PUBLISHED IN REPUBLICA DAILY ON DECEMBER 14, 2018