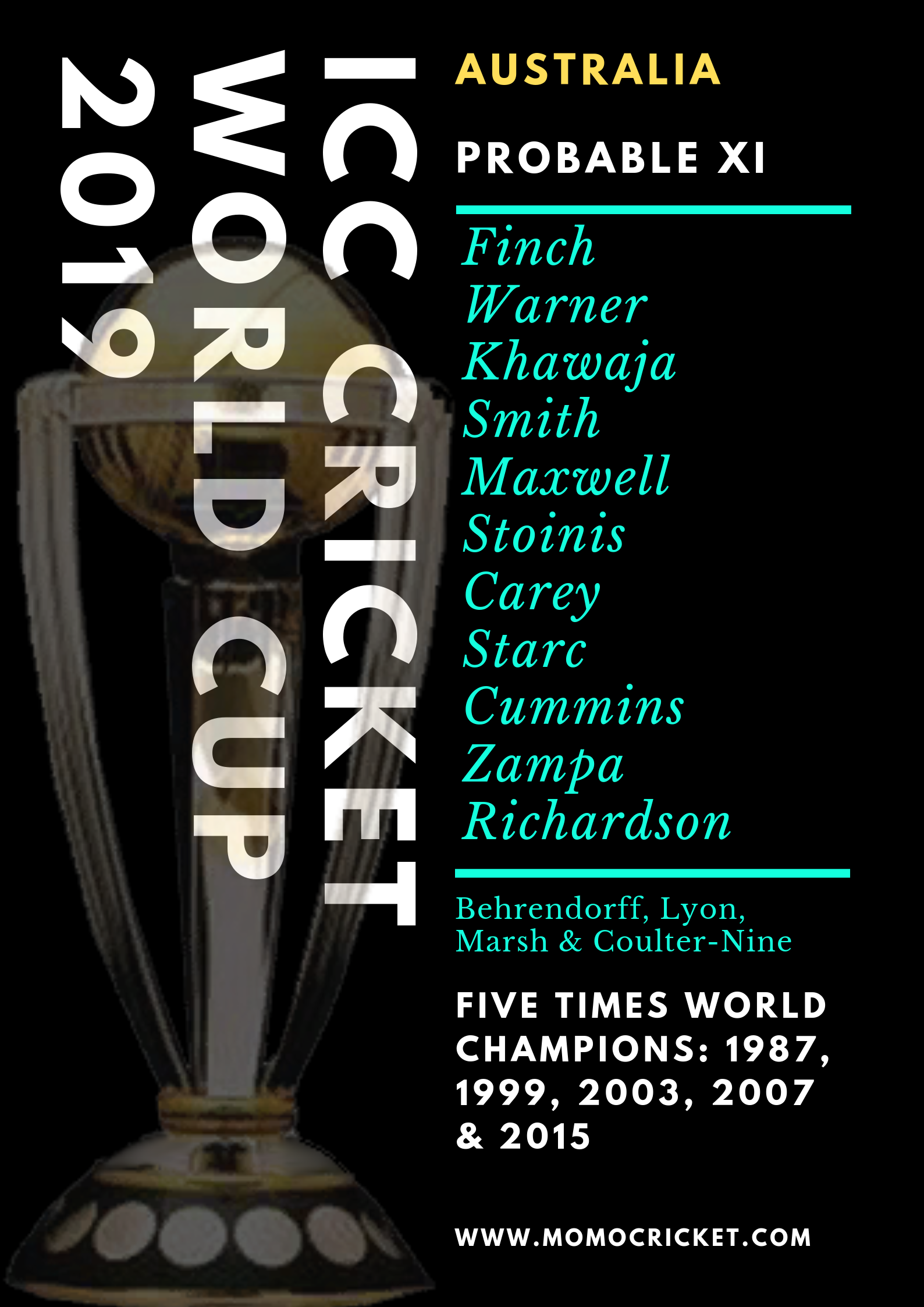 The Kangaroos are the five times champion as well as the current holders of the world cup trophy. The last time Australians visited English soil, the home side thrashed them 5-0 in the ODI series (2018).

The recent away series wins against 2nd best side in the world ,India , and Champions Trophy 2017 winner, Pakistan, suggests Australia are getting their team glued together and are performing much better than last year.

It will remain unknown till the world cup whether the version 2.0 of Steven Smith and David Warner will perform better as an individual batsman but it is for sure that their comeback after finishing the bad will lift the spirits of the team.

The  Strengths: Australia’s batting looks settled and solid.Captain Aaron Finch (9) had arguably his best ODI series against Pakistan with two tons and two half centuries to his name. The returns of Warner and Smith add more firepower, stability and strength to the batting unit. Usman Khawaja (19) is another name who is having a brilliant season but they made a questionable decision by leaving in form batsman Peter Handscomb. The inclusion of left handed Shaun Marsh, who had a fantastic home series earlier in the year against India, gives them another batting option whereas power hitters like Maxwell and Stoinis can hit any bowlers out of the park on their day.

Australia are hitting the top gear just in time for the world cup. Smith has started to look like his former self in the Indian Premier League (IPL). Usman Khawaja and Aaron Finch are hitting the peak of their forms.

The inclusion of Warner in playing XI should not threaten the place of Usman Khawaja, who can be shuffled a place or two down top order.

England blew away Australia’s bowling in the process of making

the highest ever ODI total last year. Pat Cummins has been leading their lines in the absence of mercurial Starc. Josh Hazlewood was left home due to the lack of game time after his return to full fitness whereas Starc is still subject to fitness concern. Cummins enjoyed brilliant two overseas tours whereas Adam Zampa has been consistent performer this year for Australia. Marcus Stoinis and Maxwell are the only two all rounders and they are more inclined towards batting. Inclusion of Nathan Lyon can be fruitful one if the pitches dry on as the tournament progresses.

Warner and Smith should slot straight into the playing given Australia left out Handscomb from the squad itself. Similarly, Warner should take that opening slot moving Khawaja down to number three and, therefore, Marsh out of the XI. Carey is the lone wicket-keeper. Similarly, Maxwell and Stoinis will have finisher’s roles as well as be the sixth bowling option if need be. If Richardson recovers on time he should start ahead of Coulter-Nile. Likewise, Zampa has been in very good form to pip Test specialist Lyon for the lobe spinner’s role.

1. Aaron Finch (9): Only Australian batsman to be ranked inside top ten of the world rankings, the Australian captain is enjoying fine form with the bat recently.

2. Warner and Smith: The duo return after the one year ban for the infamous ball-tampering saga. All eyes will be on the former Australian vice captain and the captain on the English soil and whether their inclusion sky rockets Australia’s chances of defending the cricket’s pinnacle prize.

Australia always get the team performing glued together just in time for big events. They have the players who have the knack of performing when it matters and a killer instinct to win crucial matches. They have dominated international cricket for many years and every new player or leader inherits same attitude.

It is safer to say Australia doesn’t pose the talents like of previous world cup winning squads. For the nation which once assembled the greatest cricket team in the history including the serial winners and born champions, nothing will satisfy them except the trophy. But the chances to even reach the final look slimmer than ever because of emergence of another great ODI side looking to write its name in the history books, England and perennial powerhouse of the gentleman’s game, India .With due respect to the other sides, the two teams are heavy favorites to go all the way .The two teams have their weaknesses, highlighted by their recent struggles and Australia have the balance, players and tactical awareness to beat any side in the world.

With top 4 teams directly progressing to the semifinals, it is sure to be tight affair in the league stage. I think, Australia have enough in their ranks to reach semifinals this summer.