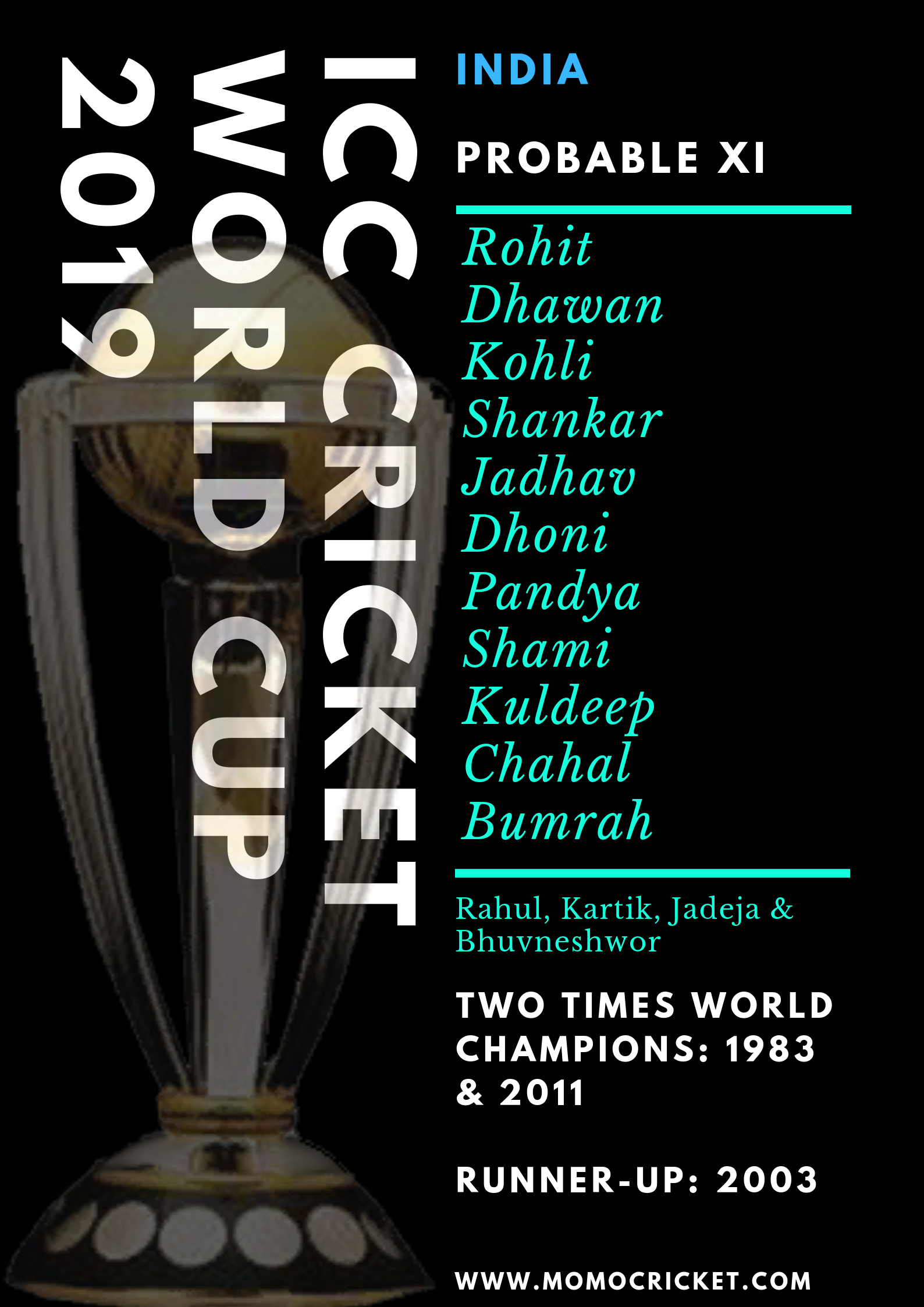 The men in blue are the two times champions, their recent being the sensational win in 2011. They were the first team to win the cup at home venue as hosts. Virat Kohli will be leading his troops as the captain for the first time in the world cup. The introduction of two wrist spinner is the reflection of India’s new aggressive approach in the new modern day cricket.

India are blessed with possibly the greatest batsman in the limited over formats, Kohli. That name is enough to send shivers down the spine of the opponents. They have an opener who makes fun of double tons in ODIs, Rohit. The two Indian top order batsmen are currently 1st and 2nd ranked respectively. Arguably, no team in the world can rival India’s top order on their day. Shikhar Dhawan’s fast approach sets platform for Kohli and co to flourish.

India always had the knack of producing world class spinners. But the immensely successful introduction of two wrist spinners in place of traditional finger spinners shows India’s new approach under their new captain. They have the death over specialist now, the kind of bowler they once desperately dreamt for. Kuldeep and Chahal currently occupy 7th and 8th place in the bowlers’ ranking whereas Jasprit Bumrah is the best ranked bowler in the ODI format.

India’s fast bowling unit has been described as the best the country has ever managed to field up, with addition of  always accurate Bhuvneshwar Kumar and speedster Shami.

The weaknesses:
The no 4 batting position and the vulnerable middle order will be tested. The exclusion of Ambati Rayudu and Risabh Pant raised the eyebrows of many. Vijay Shankar is set to play for India in that position. Slightly weak when you see Steve Smith, Eoin Morgan, Faf du Plessis, etc play for India’s rivals in that position. Their recent series loss against

Australia showed they can be vulnerable at times. The top order seems to have been carrying the duty of scoring runs. India’s middle order isn’t the weakest one but seems to have stuck in some combinational conundrum which comes from captain Kohli’s desire to play with six bowling options and including an extra seamer.

India’s XI seems engraved on stone. The only question will be that no 4 position and the fitness of Kedar Jadhav. Else their XI is psychologically and practically ready to perform on English soil.

Key players:
Virat Kohli: Everything has been written about him. As has been the case in last 6/7 years, the Indian skipper will be the talisman for his team in the world cup.

The spin duo: The wrist spinners are playing in their first world cup. They have performed exceptionally well till now. India will need them to go all the way.

Since only four teams will make through the group stage, it is hard to predict the outcomes. But seeing how well Indian top order and bowling unit is stacked, India will fancy their chances to win it all. They know how well they have been performing and anything short of the trophy will not satisfy them. They breezed through the Champions Trophy two years ago until spirited Pakistan shocked them in the final. But many things have gone India’s way since. Dhoni has started to find his batting/hitting form back. India is led by the aggressive captain, with plenty of match winners in the XI, especially bowlers, which has been India’s Achilles Heel in past.

India have the weaknesses, so does other teams, and anything could happen in this summer but India should have what it takes to make it to the finals. Kohli is a kind of captain who keeps everyone on toes. If the national team can emulate the same throughout the tournament, I won’t be surprised if they win the whole tournament this summer.