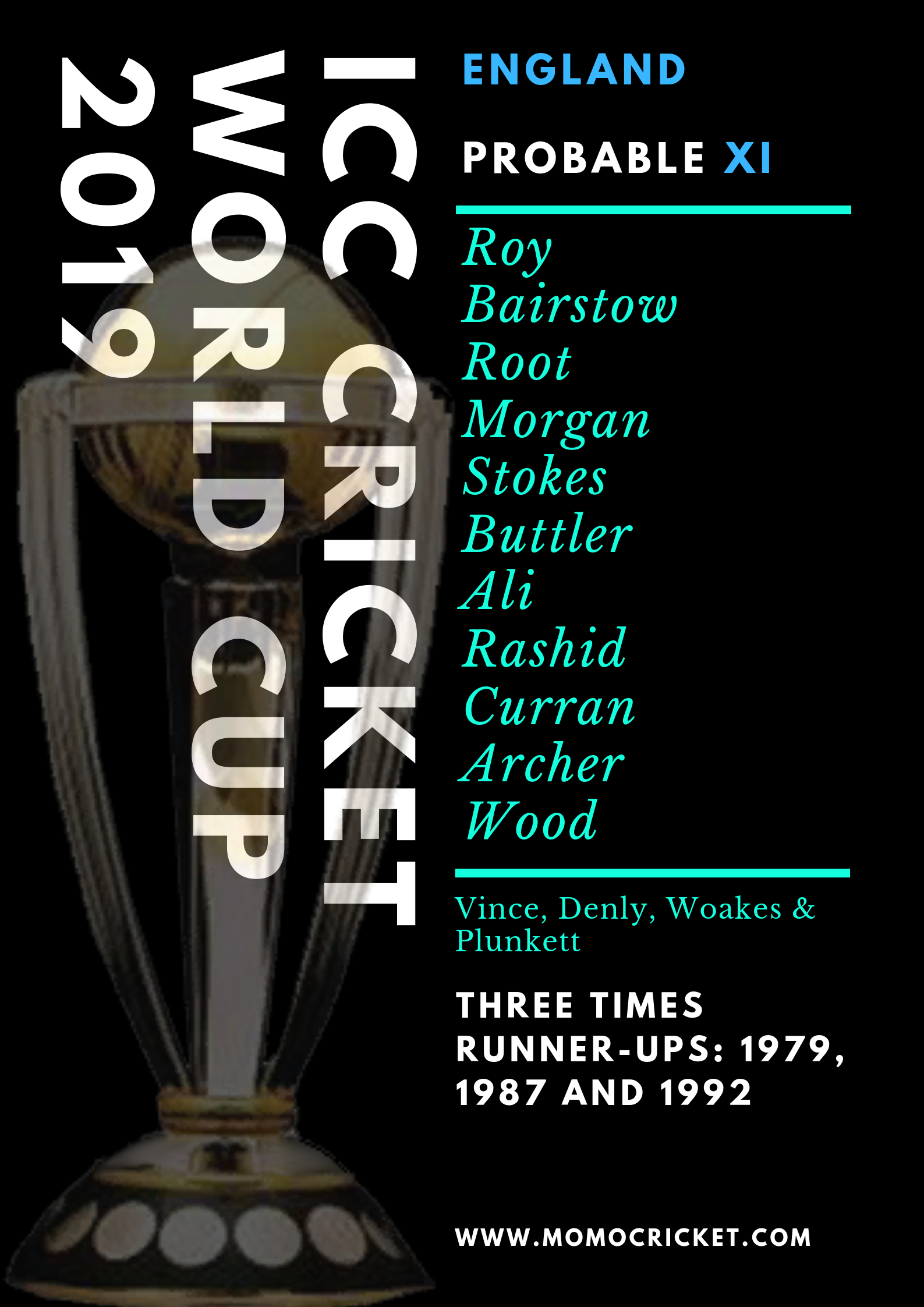 Cricket will return home this summer. The three editions which were held in England didn’t sing happy tune for England, with West Indies (1979), Australia (1987) and Pakistan (1992) beating them in the finals. The Three Lions will be hoping to get the hands in the trophy for the first time and they are heavy favorites to win the trophy at the Lord’s next July.

This England side is the most attacking side ever assembled in cricket’s history. Such is their attacking depth and style that pundits are expecting England to cross 500 mark sooner than later. Pakistan became the first side to cross 340 thrice consecutively but all those mammoth totals went in vain. The rampant English batting side chased those targets with ease. Obviously, their batting is their strength. Jonny Bairstow and Jason Roy are two of the most attacking openers in today’s cricket. The member of Fab’ 4, Joe Root, is very reliable batsman whereas captain Morgan is in the form of his life. Ben Stokes is going through recent slump in form but his aggression and hunger to win games will help England. Buttler’s blazing stroke play provides fireworks in the middle order whereas Ali can add some valuable runs. Buttler was hailed as greatest ODI players of England recently by Nasser Hussain.

English pitch are being considered as flat and batsman friendly. The calls have been made to change those pitches and make right balance between batting and bowling. Nevertheless, English bowling attack is their weaknesses. If the pitches stand in their current shape throughout the tournament, England and India will be overwhelming favorites because of their batting depth and ability to bat in additional gear. Combine the flat pitches with short English boundaries, the world cup could become the run feast and nightmares for bowlers. ICC prepares pitches for the world cup, so, we can expect some improvements till the world cup commences. Rashid is the highest rated bowler at (10th ). Their pace attack isn’t potent enough and weaker considering the pace attack of India, South Africa, Pakistan and even New Zealand. There is every chance Jofra Archer will be called upon to replace one of the quicks. Similarly, injury to Sam Billings means James Vince is frontrunner to replace Hales. There are murmurs that England might even opt for Liam Dawson instead of Joe Denly. This things imply, England are still unsure about an ideal XI but batting order.

The damp summer and good pitch could assist the pace bowlers whereas the dry summer assist the spinners. England must find a way to limit the oppositions and not let them play to their strengths.

Jofra Archer:   Archer’s inclusion will be confirmed after this Pakistan series and he is the kind of bowler this England side had been missing. A pacy fast bowler whose yorkers can wreak havoc in the opposition line up, the opponents hasn’t had much time to work against his bowling as he will be playing his first ICC tournament.


Such is their batting power, everyone of the top order and middle order, from Roy to Stokes, are very vital for England’s chances.

England have had quite a transition. The 2015 World Cup in Australia saw helpless England side knocked out by Bangladesh in the group stage. Since then, they have made to the 2016 T20 World Cup’s final, broke world record for highest ODI score by blowing Pakistan away for 444, broke the same record by beating Australia two years later and made 484, clean swept their Ashes rival home and away and they don’t look finished yet. Anything less than the final would be huge surprise and the Three Lions are the overwhelming favorites to lift the trophy.

Their home support and versatility of their bowlers can come handy in the tournament.

No one will be surprised if England win the trophy. Such is their class that 500 no longer looks impossible to achieve when England are batting. Everything will be known when the tournaments unfolds. Any side can upset anyone in cricket. But does England have what it takes to win the cricket’s most coveted prize? I say, yes.