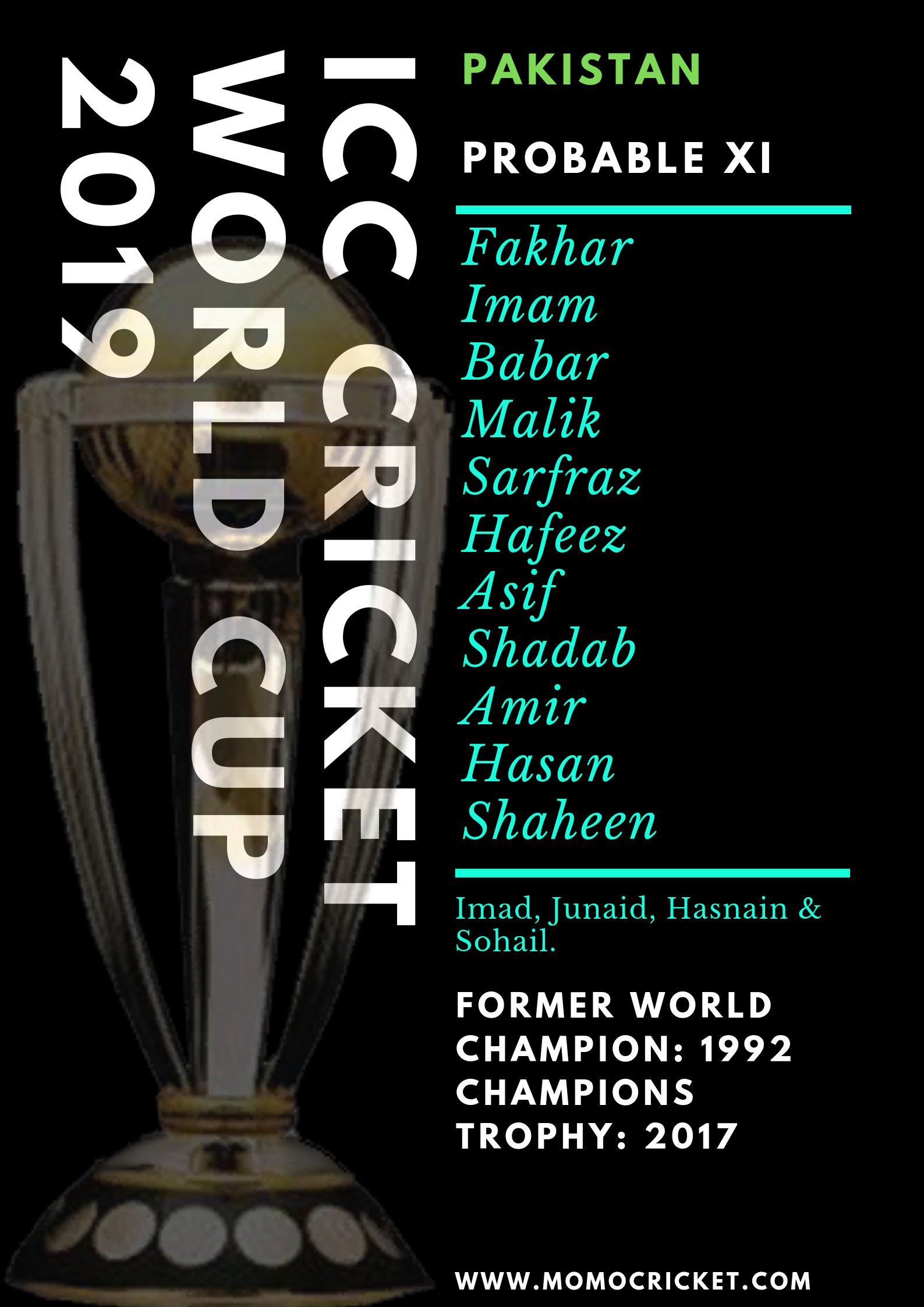 The Shaheens’ first and only triumph till date came in 1992 when they beat England in the final. They reached the final 7 years later only to get thumped by Australia. They will be hoping to repeat the performances which led them to their first ever ‘champions trophy’ two years ago in England.

No obvious weakness or strength in this Pakistan side but they have their own share of vulnerabilities. They are not the consistent of teams and certainly not the most strongest in this edition. Similarly, inability to defend high scores in current series against England has raised questions over their bowling department off late.


As has been the case so often, Pakistan’s strength always lied in their bowling. Muhammad Amir makes the late comeback in the squad in place of struggling Faheem Ashraf. They were also blown away by the same rampant English side in 2016 for the 400+ score but it was the superb bowling display that won Pakistan the Champions Trophy on the same soil two years ago.


Hasan Ali is the highest ranked bowler at 16th whereas Amir’s inclusion could raise the eyebrows of many. Since that heroic performance in the Champions Trophy final two years ago, he has taken just 5 wickets in his 101 overs. Amir has the knack of performing when it matters and he won’t get any better occasion than the world cup to put his woeful numbers behind. Pakistan clearly trusting his experience and big match temperament to come good in the world cup in a bowling which includes the young likes of Shaheen and Hasnain.


Needless to say, the recent form with the ball has been absolutely woeful but it mustn’t change the fact that bowling has been a dependable unit for Pakistan since a long time. They have missed the canny abilities of Shadab Khan who is recovering well for the main event. Their recent form is poor but it is in the bowling where their class and pedigree lies.

Similarly, Pakistan’s batting has been consistent like never before since the rise of top-order of Imam, Fakhar and Babar. Whilst Babar is touted one of the greatest batting talent to emerge, Imam’s consistency and Fakhar’s fireworks has helped Pakistan put up some consistent totals on the board. The experience of Malik, Sarfraz and Hafeez in the middle order will complement the top order followed by the big-hitting abilities of Asif Ali who has performed well against pace bowlers in the death overs.

Pakistan are unpredictable, most of the times, their strongest unit can let them down whereas their weakest link rescues them from nowhere.

Pakistan are very familiar with the batting collapses over the years. Statistically, men in green look better while batting than bowling. They have the two batsman inside the top 15 of the world rankings, with ever reliable Babar ranked 7th and Fakhar Zaman at 11th.

Their middle order might be the weakest link despite boasting tones of experience. Pakistan are infamous for bottling the good platforms and losing the game out of nowhere. Ali is the only pinch hitter in their squad while question remains over the batting of captain Sarfraz. His decision making is also frequently questioned. Malik, Sohail and Hafeez are selected as the all-rounders but they seem to lack that attacking shift and versatility which is so prized these days.

Probable XI:
Imad Wasim has been deployed as allrounder in Pakistan’s recent matches without much fruitful results. Shadab is likely to take that position back. With lack of proper all-rounders, Malik has past his bests, Pakistan might have to go in with only one spinner in Shadab or Imad in place of one of the fast bowlers or the middle order batsmen if conditions demand.XI: Fakhar, Imam, Babar, Malik, Sarfraz, Hafeez, Asif, Hasan, Shadab, Amir, Shaheen

Pakistan are an unpredictable team. The last world cup is the perfect example for that. They lost the first two matches against India and even West Indies but somehow beat South Africa, that whole turnaround happening inside 15 days. Sarfraz’s captaincy has been frequently questioned but has led the team in the big stages.

Pakistan get going when the going gets tough. They would love to open the tournament in good fashion but they seem to be at their peak best when they have their back against the wall. The criticisms and do-or-die situations somehow propels Pakistan to perform at their best.

Pakistan may narrowly miss out on the semifinal spot but they will leave the tournament with some very eye-catching performances. This is a mere prediction and such is the hunger inside the team and in Pakistan that anything less trophy won’t make them happy. If they sort out the problems and get their plans executed perfectly, who knows what could be achieved in England this summer? They weren’t the favorites to win the Champions Trophy as well.