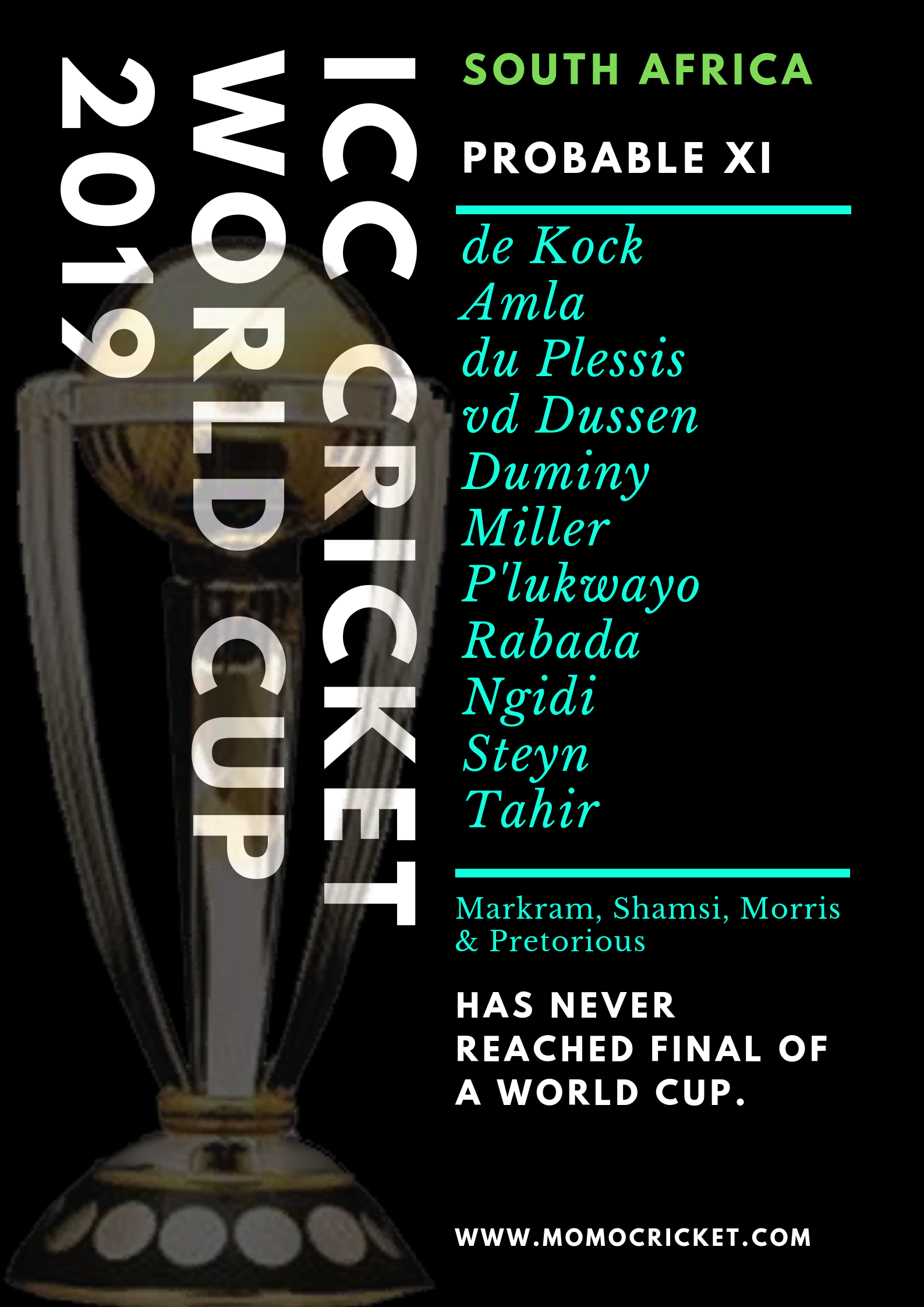 The Proteas don’t have happy memories when it comes to the ICC tournaments, even disappointing in the World Cups. They bowed out against New Zealand last time in one of the greatest ODI game ever in the semi finals but except that, they are infamous for failing to cope under the pressure and not performing as per expectations.

The 2015 World Cup squad of the ‘Rainbow nation’ was full with the talented individuals, who were hitting the peak of their careers at that time. The current squad isn’t as exciting as then, but still South Africa have plethora of talents at the disposal.

The English conditions have turned into batting paradises. Looking at the huge totals that have been posted in the English conditions inside these two years, both in international and domestic games , it is safe to say the pitches in England and Wales have turned into bowlers nightmares in limited overs but all the blames don’t go to the pitches and conditions alone. The way England have started to play limited overs cricket, the ultra-aggression, has also played its part in sending the shivers down the spine of the bowlers.

Still, the strength of this South Africa side lies in seam bowling. Kagiso Rabada will be looking to leave his mark in his first World Cup appearance whereas Imran Tahir will be looking to set standards high in his last ever tournament for his country. Rabada is highest rated bowler at 5th position whereas rejuvenated Dale Steyn will look to cause havoc among the opposition lineup which he used to do with ease in red ball cricket. Lungi Ngidi and young Nortje will add raw pace and freshness to the lineup. South Africa will rely on their bowling unit in the English pitch, which isn’t seam bowlers paradise anymore.

The middle order is a troubling unit for the South Africa. David Miller and JP Duminy are past their best and struggling to bat in additional gear if needed. Hashim Amla, the modern day great, is enduring very tough time with the bat which has seen his average drop from 51 and above to less than 49 in between these 4 years. Van der Dussen is exciting prospect but still not ripe in international cricket.

Faf du Plessis lacks the fire power of go all berserk whereas Aiden Markram is yet to get continuous chances. Quinton de kock (5th) and Faf du Plesis are rated inside top ten batsmen but question remains on their mentality to cope pressure. Similarly, in the top order, de Kock seems only one capable of matching stroke to stroke to other glorious hitters in the opposition teams.

Key players:
Q de Kock:
For me, QDK is South Africa’s best batsman. His last World Cup wasn’t great for him, with de Kock failing to reach the expected heights despite being on very good form. de Kock has recovered from his slump this year and has had very good series against Australia and Sri Lanka.

The South African speedster is considered by many as the best bowler in the world currently. He has everything that a very best fast bowler possess, from pace to toe crushers. In slightly batting friendly pitch, South Africa will hope to have him in never before seen levels.

Since only four teams will make through group stage, it is hard to predict the outcomes. South Africa aren’t good as they were 4 years ago. They don’t have the firepower that the other teams have. Their whole batting unit doesn’t look very well set to take on the very bests week in and week out during the round robin leagues.They will have to be at absolute best from the day one, as they kick off tournament on the very first day against the Three Lions.

Everything will start to unfold once the tournament gets underway. But I have a feeling this South African side will get exposed somewhere through the tournament, thereby, hindering theirs dream of winning the world cup.