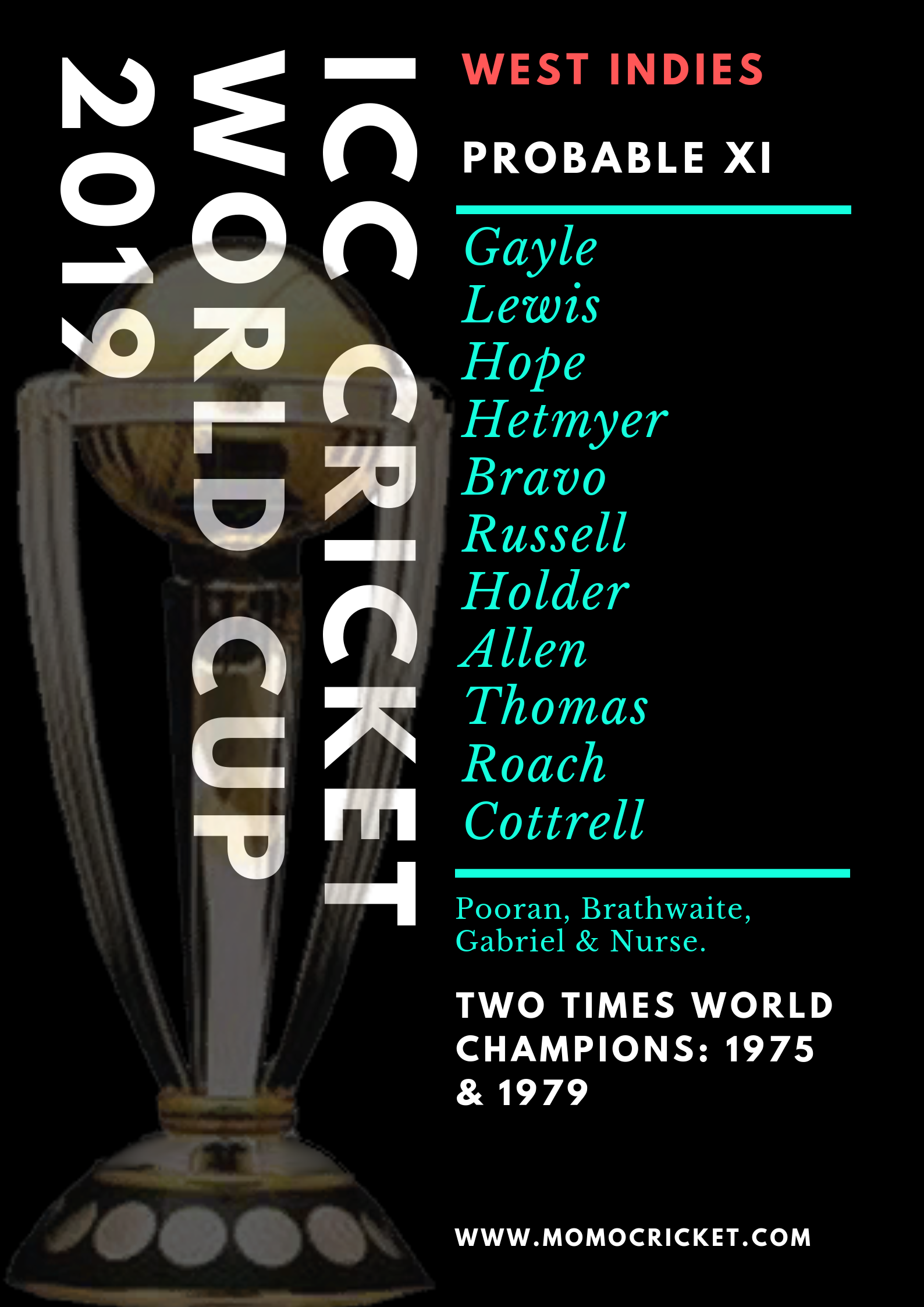 The West Indies are the two times champions of the world, both success coming in the first two editions. The intra-board struggle and the players’ dissatisfaction has been plaguing the West Indies cricket. The West Indies will try to put their problems behind and look to repeat their feats of 75’ and 79’ when they were literally unbeatable.

The Strengths:
Nobody would have given the West Indies a chance a year ago. Now, they are a vastly improved side, at least in the batting department. Chris Gayle will be playing his final tournament for the West Indies and he will look to depart on high. The emergence of Shai Hope and Shimron Hetmyer has given the West Indies batting a fresh look. They have the embarrassment of riches when it comes to pinch hitters. Andre Russell looked unstoppable in recently concluded IPL whereas Jason Holder and Carlos Braithwaite are the reliable pinch hitters. Nicklaus Pooran can do equally good job if presented with the chances. Gayle’s blazing opening will give platforms for the consistent Hope and co. to perform. Along with Hetmyer, both will arrive into the tournament with a very good season behind them. West Indies’ batting stood toe to toe against possibly the most attacking batting side ever assembled, England, in their last home series before the world cup. Thus, the batting department will be confident to wreak havoc against the bowling lineup of opposition.

The weaknesses:
West Indies and England played against each other with aggression destroying each other’s bowling unit. West Indies managed to edge England in that series but their bowling attack is one of the weakest among the world cup playing nations. Their bowling weaknesses is being brought to surface by Ireland and Bangladesh in ongoing tri-series. Jason Holder is the highest rated bowler (31st) and they have the allrounders who can contribute equally with bat and bowl but the lack of clear leader to spearhead the bowling attack can cost them dearly especially when the teams have started to focus increasingly on upsetting the bowler’s rhythm. As the tournament goes on, the pitches might get dry and West Indies lack the quality spinners too. West Indies’ lack of good fast bowlers and spinners make their bowling unit one of the weakest in the tournament.

Probable XI:
Left-arm spinner Allen might play ahead of off-spinner Nurse in batting pitches whereas Cottrell will give much needed left-arm pace variation to the team which consists all the right-arm fast bowlers.

These two batsmen are currently the most exciting and talented in the new crop of West Indies players. West Indies will rely on the consistent batting of Hope and counter attacking style of Hetmyer.

Chris Gayle:
Gayle will be playing his last tournament and he will do everything he can to have fairytale ending. The blazing Jamaican opener will try to leave his mark in the best possible way.

Their batting can take any side to the cleaners on a given day but it is the bowling department where the weaknesses lie. They have the reliable pinch hitting all rounders but that won’t be enough in the world cup where your weaknesses are exposed. I believe it will be difficult to out-bat opposition in every match. They do not have the same balance that maybe India, England, Australia and New Zealand have, at least on paper.

Everybody loves the Caribbean Calypso but they have the weaknesses which may come to surfaces almost on every game. The group stage will be tense for sure and I guess they will miss out on the semifinal berth this summer.