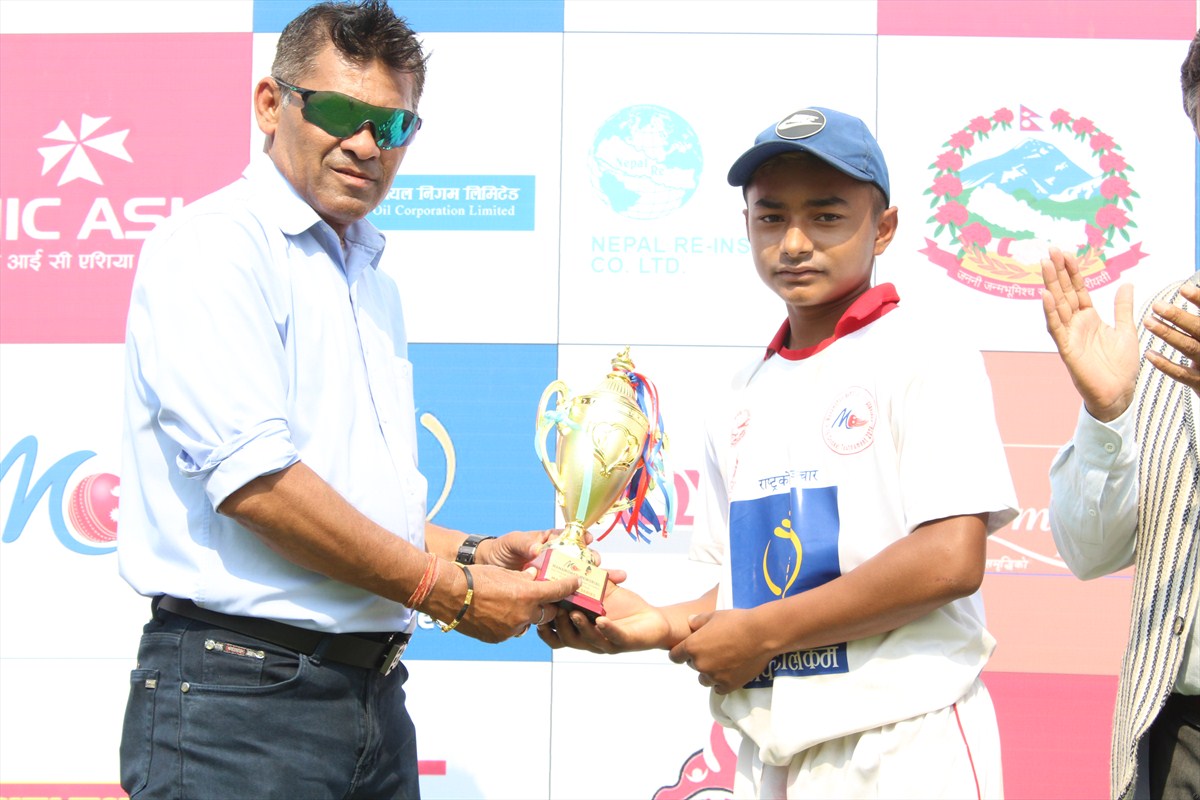 The Sudurpaschim Province captain Suwash Ayer rounded off happening few months with a high and a low. High, he was class above anyone else in the ongoing first ever edition of Manmohan Memorial National U-16 Cricket Tournament. Ayer claimed the player of the tournament award for scoring 209 runs in five innings and picking up nine wickets in five matches.

Low, he failed to win the championship due to an injury he suffered in semifinal match ruling his out from bowling in the final match against Province 2 who held their nerves in the tense chase to defeat Sudurpaschim by four wickets to lift the first ever edition of Manmohan Memorial National U-16 Cricket Tournament played at Tribhuvan University Cricket Ground in Kirtipur. Province 2 chased a target of 134 runs with 21 balls to spare to claim the U-16 national trophy. Despite the injury, Ayer did score 47 runs in the first inings to help his team post 133 runs in the 30 overs.

Ayer’s runs tally of 209 runs in five matches is 89 runs more than second placed Ashish Bhattarai. He also was the highest wicket-taker of the tournament despite not bowling in the final match. He only fielded two overs in the second innings as vice-captain Arun Mahara took over the captaincy duties for remainder of the match.

Ashish Bhatta scalped three wickets to keep the Sudur Paschim in hunt for the win. Similarly, Govind Bist and Sachin Badayak shared a wicket each. Badayak had dismissed Meghraj Mahara, the player of the match of the semifinal, for three runs raising Sudurpaschim’s hopes of defending the total. However, Bist was expensive in his six overs in the match conceding 52 runs. 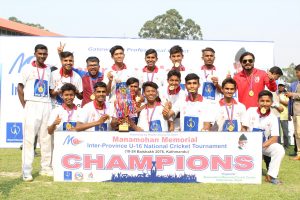 At one stage, Province 2 was struggling with 78 runs for the loss of five wickets. Middle order batsmen, Nikhil Singh and B Patel shared a partnership of 41 runs for the sixth wicket to secure the win. Singh scored a patient 27-run innings during his 47-ball stay which included three boundaries whereas Patel remained not out on 28 runs facing 27 deliveries in the innings which included three boundaries. Sudurpaschim conceded 22 extras in the match which made Province 2’s chase easier.

Earlier, Sudurpaschim had won the toss and elected to bat first. The heroes with the bat during the chase, Singh and Patel, had picked three wickets each to help limit the first batting team for 133 runs for the loss of nine wickets in a 30 overs per side match. Likewise, Arabaj Ansari and Prashant Singh shared a wicket each.