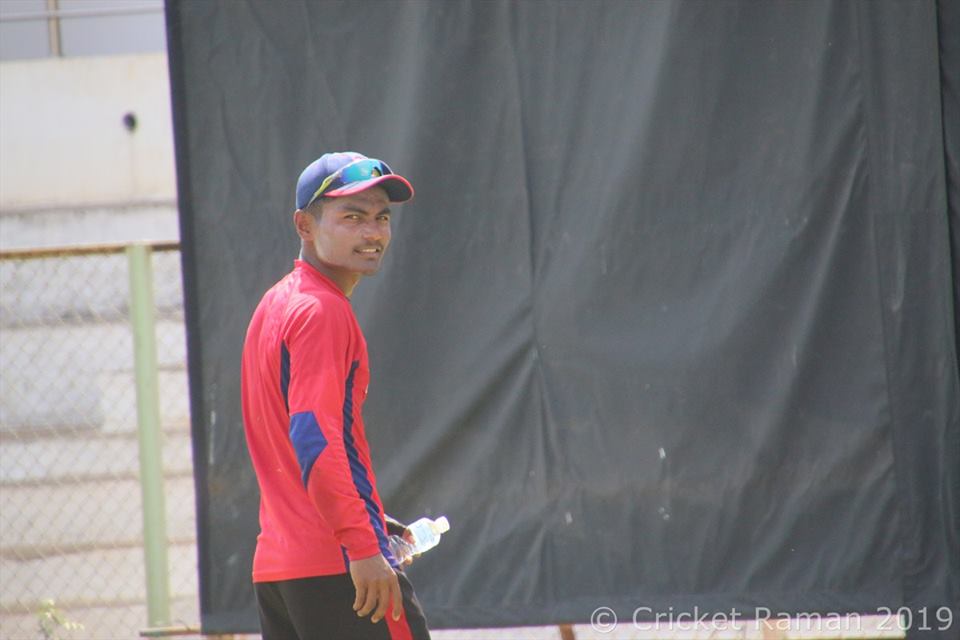 Four years back when Nepal played T20 World Cup in Bangladesh, millions of kids back home were inspired to hold the bat and ball, one of them was Rohit Kumar Paudel.

To observe his journey one might be surprised to see how remarkable a 15-year old kid has been to become the maestro of Nepali middle order. He is still raw at this age but he, for one, rejected the fallacy of always collapsing Nepali batting and resurrected famous wins from middle order. No more, Nepali cricket fans want bowlers to bat ahead of recognized batsmen.

Paudel first joined the Baluwatar Cricket Club in Kathmandu when things started happening for him. A talent hunt for U19 national team took place at all parts of the country. He cracked into the preliminary squad and then 14 men full squad for the ACC U19 Asia Cup 2016. He was a new name in the squad without raising any major eyebrows except that he made it to the national team from a talent hunt hinting that he knows how to turn up for important moments.

Nepal lost against Sri Lanka in the opening encounter by a narrow margin (1 runs). The second match was against India, the masters of age-level cricket. Paudel hammered 68 runs in the match. It was this match when Paudel’s 24 runs in an over against Kamlesh Nagarkoti put him in mainstream attention. Nagarkoti is a fast bowling prodigy that went on to win U-19 World Cup for India and secure multi-year contract with Kolkata Knight Riders in Indian Premier League.

However, it was just a glimpse of his talent. The absence of association and prejudice in selection has pushed plethora of talents into oblivion. It was the same time when Binod Bhandari and Sagar Pun were struggling with form throughout the year. They were merely surviving in the team at the criminally overused documentation of “no talents back at home to replace the current national team member”.

Amid debacle against Hong Kong, when Nepal eventually lost the chance to secure top-four finish in ICC WCLC, which was won by the Netherlands, captain Paras Khadka finally stated that it (the last WCLC leg against the United Arab Emirates (UAE)) will be last chance for few players to prove their worth in the team. Nepal was desperate for changes with the cut-throat cricket league, Division 2, looming ahead.

Meanwhile, Aamir Akhtar was working his best to make Everest Premier League (EPL) the biggest in the country. Each of the six teams had to assign three foreign players. Amid known big names like Farveez Maharoof and Asif Ali, Paudel impressed the most. It was his breakthrough tournament. He played couple of magnificent knocks leading Bhairahawa Gladiators with unprecedented wins.  It was blessing in disguise for the national team to find someone like Paudel could come in as like to like replacement for Bhandari, a lower order dasher with ability to hit big shots, of course with more results.

Paudel was subsequently roped in the 24-men closed camp for the Division 2 and, eventually, traveled with the final squad to Namibia, arguably, the most important tournament Nepal had played in long time.

The failure in Division 2 meant future was uncertain for the players. Before Canada, Paudel’s innings of 47 runs and 92 runs partnership with Aarif Sheikh in a crucial win against Kenya marked his arrival. Against Canada, the match famous for Karan KC’s godly exploits, he had scored valuable 27 runs aiding for the unforgettable victory.

The contribution of Paudel for Nepal into getting ODI status is bigger than we realize.

He never looked back. In a very short span of time, he has played numerous vital innings. He isn’t a tradition slogger or prodder, he calculates the situations and paces his innings, runs sharp between the wickets. He is every bit of player that current cricket demands for. He is the second highest run-scorer for Nepal after Khadka since his debut. He recently became the youngest player ever to score an international half-century at the age of 16 years 146 days beating Sachin Tendulkar’s record.

It is proof of his growing stature in Nepali cricket that he is trusted with the leadership of under-19 team despite being the regular member of the senior team. He was supported by his players who went to play the ICC U-19 Asia Region Qualifiers for the World Cup. He took the responsibility like a duck to the water. The team hardly made any mistakes but fell agonizingly short by a run margin against the UAE under DLS method costing a berth in the ICC U-19 World Cup South Africa.

He can bat. He is an electric fielder. His catch in Nepal’s first ever ODI win was a game-changer. He can bowl seam-ups. And he can lead a national team.

The possibilities with Paudel seem endless. His stakes are growing in the Nepal cricket and for right reasons.