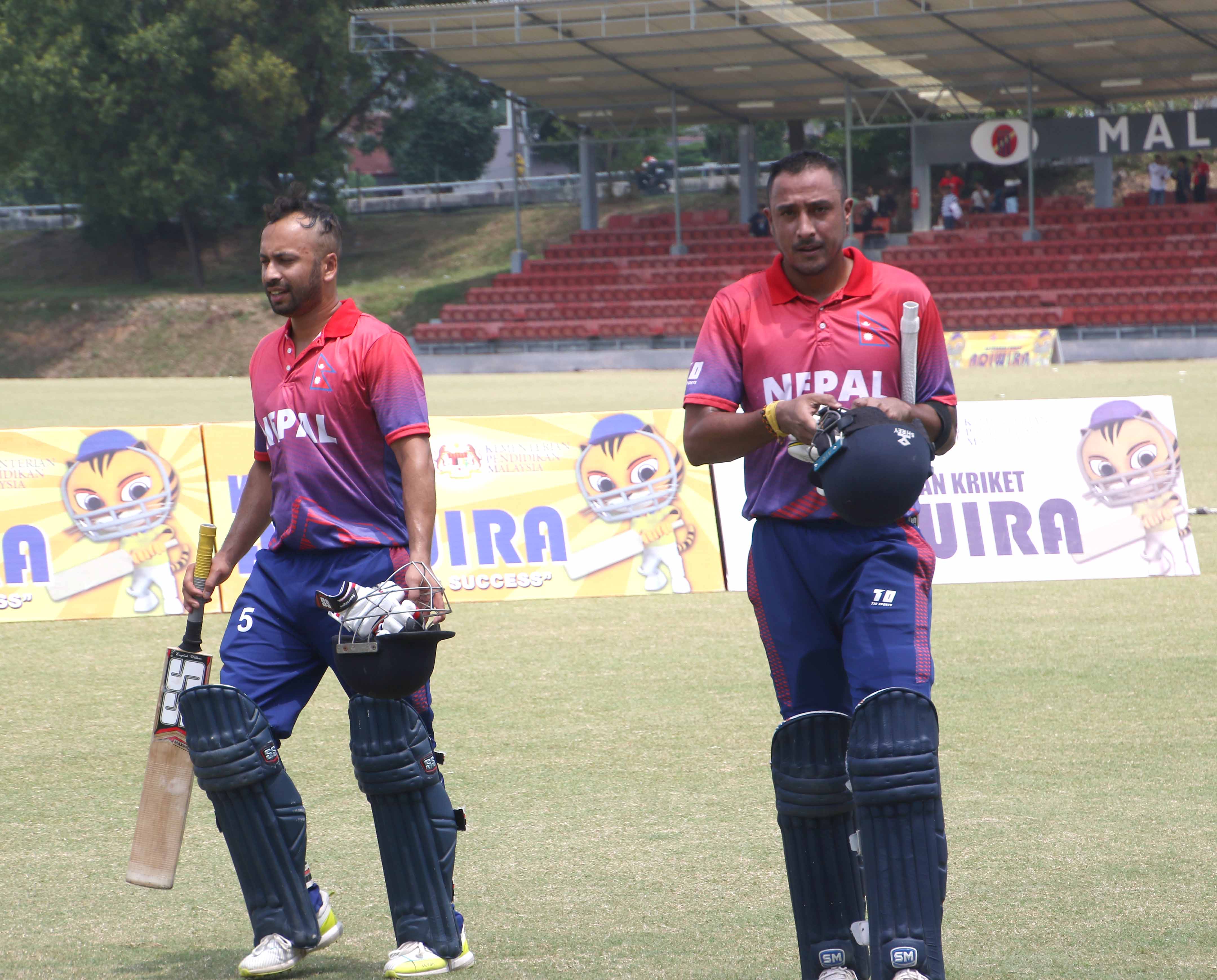 Nepal started its preparation for the ICC T20 World Cup Qualifiers with an unconvincing win against Malaysia. Nepal registered victory in the first T20 of 2-match series by 7 wickets with 9 balls to spare in a match played at Kinrara Oval in Kuala Lumpur at Malaysia on Saturday.

Nepal should be able to sail through the regional finals but the global qualifiers looks harder than ever. Gone are the days when Ireland and Afghanistan used to stand head and shoulders above other associates. This global qualifiers is the hardest amidst 6 spots are up for grabs. The gap between the test nations Zimbabwe, Ireland and top ranked associates like Scotland and Netherlands have been diminishing quite rapidly. The rise of Oman and USA cricket can’t be undermined whereas Namibia, PNG and Hong Kong remains a posing threat as ever.

Nepal’s performances doesn’t justify its ranking. The struggles shown by Nepal against Malaysia, who might not be able to make the global qualifiers is concerning.

The team may need time to settle, access the conditions, scan the opponents before getting to its best but time or number of matches is not in Nepal’s side. This kind of performance won’t take Nepal to Australia. It would have been absolutely foolish to say Nepal is underperforming based on a single game but Nepal did not meet expectations in UAE last January either. Probably, this isn’t the occasional hiccups but the concerning problems Nepal must solve before the qualifiers start.

At one stage, Malaysia looked set for 140-150 total. Malaysia were 93-2 in the 15th over before the collapse unfolded. The teams which Nepal might face in global qualifiers will surely make most of that situation. The return of Dipendra Airee might solve some of the batting problems but that alone won’t be enough to help Nepal cover grounds. Sompal Kami remains lethal as ever and very vital cog in Nepal’s chances. The bowling unit did a good job to restrict Malaysia under 130 but it is in the batting where real concern lies.

Malaysia are neither new team for Nepal nor Nepal are new to Malaysian conditions. Bar Khadka, nobody looked convincing. The opener Pradeep Airee who was paired with Khadka, had another dismal outing in Nepal jersey.

Gyanendra Malla seems out of place like often. One could say he isn’t an opener by the nature but neither Khadka is. Sharad Vesawakar did not have the return we all expected.

Similarly, at this point, we don’t know who our opening batsmen will be at global qualifiers. If Khadka continues to hold one end, we need other batsmen to at least compliment him from the other.

The consistency of Sandeep Lamichhane and Basant Regmi means Lalit Rajbanshi will be trialed to get that third spin spot if required or warm the benches at qualifiers.

Pawan Sarraf given an exciting option of opening the batting and be the third spinner in the XI but he needs to get a long run at the position he is supposed to get his opportunities before the global qualifiers.