Sompal Kami had a fruitful tour of Canada when he became the first-ever Nepali player to win an overseas franchise T20 cricket league. His team Winnipeg Hawks defeated Vancouver Knights in the final match of the Global T20 Canada League played at CAA Center cricket ground in Brampton, Canada.

The fast bowler was acquired for USD 3000 for the second season of premier event becoming only second Nepali after Sandeep Lamichhane to feature in an overseas franchise league.

The winner was decided by Super Over after the teams tied on 192 runs each in their respective innings. Kami was not included in the playing XI but had made his debut during the group stage match against Brampton Wolves in which he conceded 33 runs from two overs and batted five deliveries to stay unbeaten on a run alongside his captain Jean Paul Duminy.

Kami was pleasantly surprised by the reception he got in Canada. Most of the players knew about him and his records fro Nepal national team. He also said that players and coaches were impressed by his cricket and confidence during first few days of his arrival.

Although, he was not featured in knock-out matches but stayed spirited with his involvement in the overseas league for the first time in his career. His contributions were limited to a substitute fielder whenever required.

“I loved it and enjoyed every moment as it came. I learned new things every day. I, like any player, would love to contribute for the team whenever and however they need me to,” said Kami.

He took the crucial catch, as a substitute, of Pakistan cricket legend Shahid Afridi during the second qualifier match against Wolves which was described as ‘world-class’ by commentator and former Australia test player Dean Jones on air.

“First tournament, first final & first medal. Thank you Winnipeg Hawks for the opportunity and the invaluable experience I will take with me. #GT2019,” tweeted Kami after his team won the Canada and associate nation’s premier T20 cricket league.

He further shared that a meeting with his idol Dwayne Bravo, who was the member of his team, inspired him further in cricket. “He told me that batting, bowling or fielding is all about belief more than anything else. Cricket is all about self-belief.” Kami also stated that how big players keep things simple when comes to matches. They relax most of the times and always ready for challenges as it comes.

It was moment to cherish for Kami to share the dressing room with likes of Bravo, Duminy, Chris Lynn, and Mohammad Irfan whom he attributed as very humble and funny person. 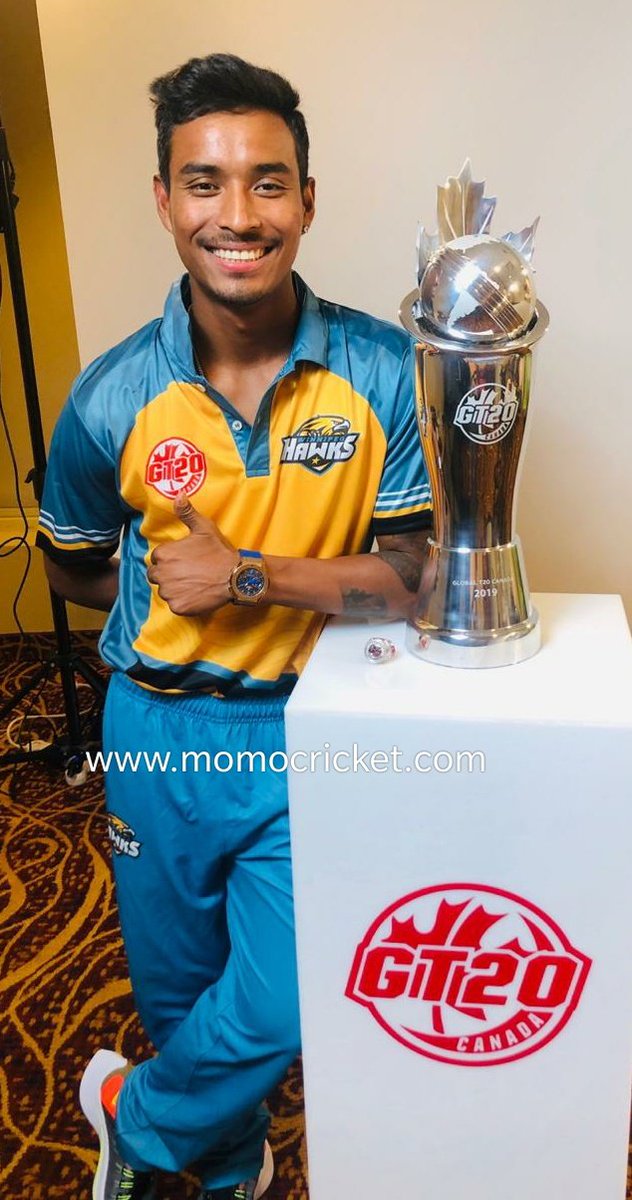 Similarly, his coach Lalchand Rajput, who led the support staff for India national cricket team during its ICC World T20 2007 trophy win, entrusted belief in his abilities and stated to be overlooked for the knock-outs only because he did not wanted to alter the winning combination that eventually helped Hawks win the league.

“He showed immense belief in me. I missed the first two games of the season which was the reason I couldn’t fit into the scheme of things,” he added. “My coach said that one bad game doesn’t define a player and I will get my opportunities in future.”

Rajput is also shortlisted in a head coach role for current Indian national cricket team which was knocked-out in semifinal of ICC World Cup 2019.

Kami will reach Nepal on 14th August. With tonnes of new experience and self-belief we can always hope for an enhanced version of him in days to come.