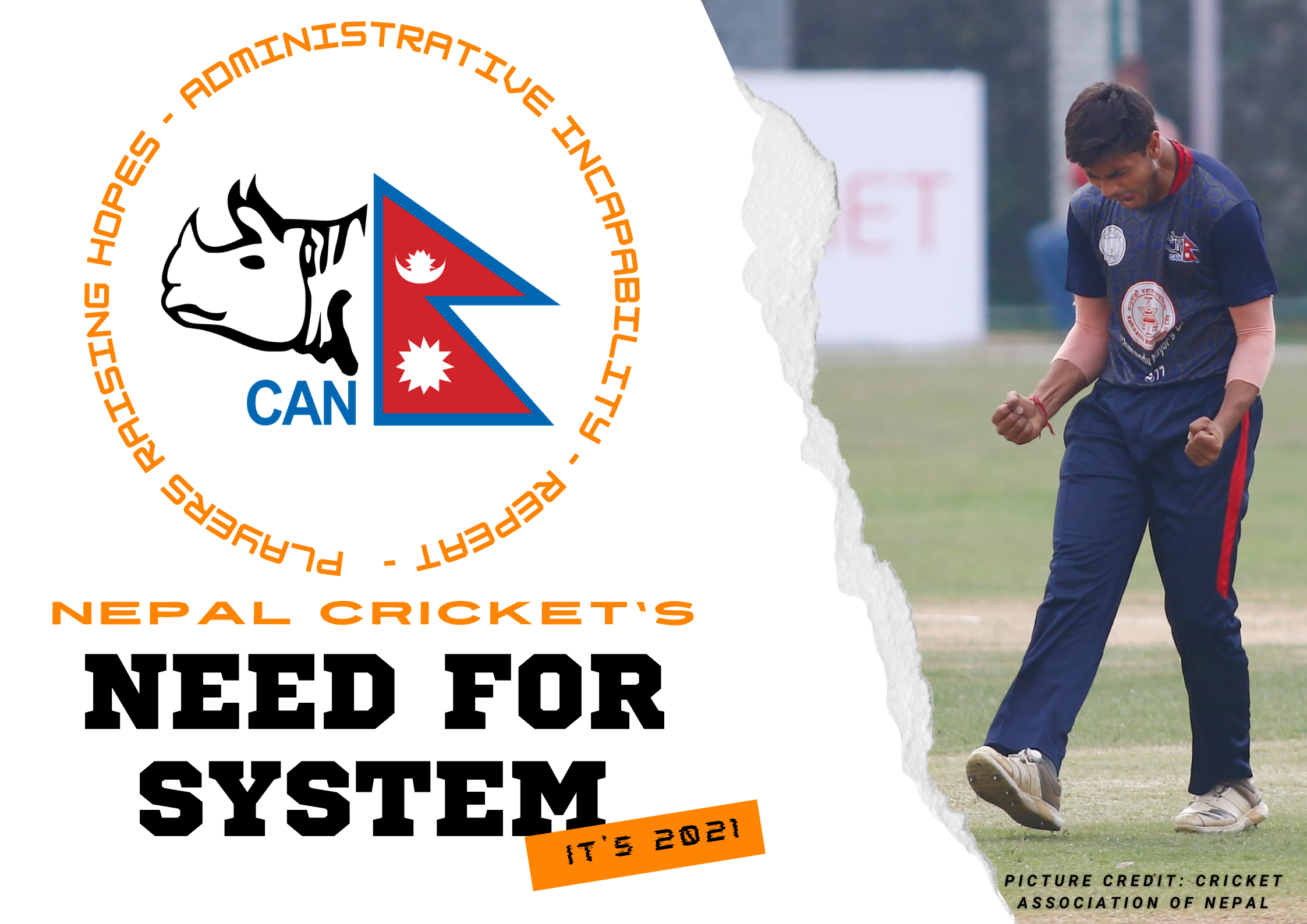 James Wickham, a BBC radio producer, asked me a question on his cricket podcast, The Drinks Break. to mention one most prominent underlying challenge hampering the development of Nepal Cricket into an established cricket team. I paused for a moment and that was enough for Wickham to conclude the question became rhetorical at that very moment.

There is not one reason that is plaguing Nepali cricket. It is a never-ending cycle of; talented players raising the hopes by their performance followed by systematic faults of administrative and technical incapability. Some roots of the problem are created by cursed ‘Vidhans’ (a legislation consisting of laws passed by the government). As if, Nepal government lawfully don’t want to develop itself. It is in every sector; sports remain the least important priority.

It is the need for a system. A proper sports system that supports its foundation and the body and let the branches grow.

Mulpani Cricket Ground, after more than a decade of investment, is still not ready as an alternative venue. If the announcements and declarations, sometimes along with 2D & 3D designs for special effects, are to be believed, Nepal has hundreds of international cricket grounds. Even moon’s surface is not far-fetched for Nepal’s political leaders. The secondary ground, upper Mulpani, currently being used for domestic cricket, has been scrutinized by senior players as unplayable and unfit to host cricket games.

Similarly, player welfare remains the least discussed topic in any cricket related decisions. In Nepal, injury means, you are done with your career. The likes of Binod Das, Amrit Bhattarai, Prithu Baskota, Sagar Pun, Sompal Kami, etc all suffered career threatening injuries. Not all came back. A couple of whom did, lost the existing contracts and got demoted as a reward despite being injured and bearing all the costs of their recovery.

The lack of parity in men and women’s, first matches, secondly salaries, is still far-fetched in realistic terms.

There was period of four years when Cricket Association of Nepal (CAN) was suspended. That could have been the weirdly productive four years Nepal had regarding usurp in cricket. It was like kid having fun time home alone.

Nepal’s greatest achievement till date, gaining ODI status, came in same period. Basically, it was all fun and adventurous few years. Cricket was happening, professional tug of war, internal competition to give the best product, was helping Nepal find its feet in world’s T20 map. A certain Ryan ten Doeschate during his 2018 visit stressed how three T20 leagues in a year is bit too much for Nepal. Hold on. Too much cricket in Nepal? Even women had a premier T20 league of their own. Yay.

Despite being a newly formed ODI nation. CAN returned in 2019 and announced its own premier T20 league. The triple threat has now become a fatal four way for the ultimate championship currently defended by Everest Premier League (EPL).

In short, cricket has become a mess in Nepal. Too much fast-food no main course meals. An extreme challenge lies ahead to organize it all. CAN needs to find a support system to let everything flourish as it is and add more. After all, private bodies like Zohra Sports Management (EPL), Dhangadhi Cricket Academy (Dhangadhi Premier League), and Queen Sports Management (Pokhara Premier League and Women’s Champions League) helped keep cricket afloat in the absence of the governing body.

CAN addressed few challenges after the restoration. They worked out central contracts for men and women cricketers. It may not be able to satisfy everyone and cover everything but it’s a start nonetheless. Dave Whatmore, a proven winner, is appointed as head coach, albeit for a year. Eventually, CAN is hosting back-to-back 50-over cricket leagues, Prime-minister and Kathmandu Mayor Cup. A much-needed change for the health of cricket in Nepal.

The involvement of departmental teams hogging promising talents on bench, keeping permanent job holders out of the squad are whole different issues CAN need to address moving forward. Introducing a system which allows all the hopefuls feature in domestic matches is a necessary agenda. For now, Manmohan Memorial Cup, another annual 50-over event is on the pipeline, which again is great news for Nepal cricket. All these without the title-sponsor for any of it.

Despite all the positive developments, the biggest challenge for CAN underlines managing all the T20 leagues in an efficient way. The brewing conflict of interests has circled cricket around from all corners. For a smooth and conflict-less operations of respective role bearers within the association should not be associated with any company/ organization that has a commercial module out of the body. Let say, a corporate group is ready to invest/sponsor the association, but the representative will be spoilt for choices between the association, he/she is working for, or the private company/entity he/she is involved with.

Teenager Gulshan Jha, a promising fast bowler, burst into scene after rattling Armed Police Force batsmen with his bounce on route to help his team Nepal Police Club lift the first ever Kathmandu Mayor’s Cup trophy. Whilst cricket fans, media and experts alike are excited by the great find unearthed by Police Club, Jha was limited to reserves for his home province (2) during the Prime Minister Cup. Province 2 didn’t select a match-(cup)-winner who was good enough to replace Rashid Khan, a Nepal international player, for the final match in the Mayor’s Cup within a month of last tournament.

The onus is on CAN and the provincial association to take necessary actions before Nepal lose more such gifted players. Similarly, the current U-19 pace bowler Pratish GC has been overlooked since the Prime Minister Cup. The U-19 starlet has not been deemed good enough to represent any province just because he missed some paperwork to take an official release papers. The system that stops its own future players from playing much needed games to continue their development.

Amid all, cricket continues to bat for its life (and blossom in parts) in Nepal like unfazed Ravichandran Ashwin in rank-turning surfaces.