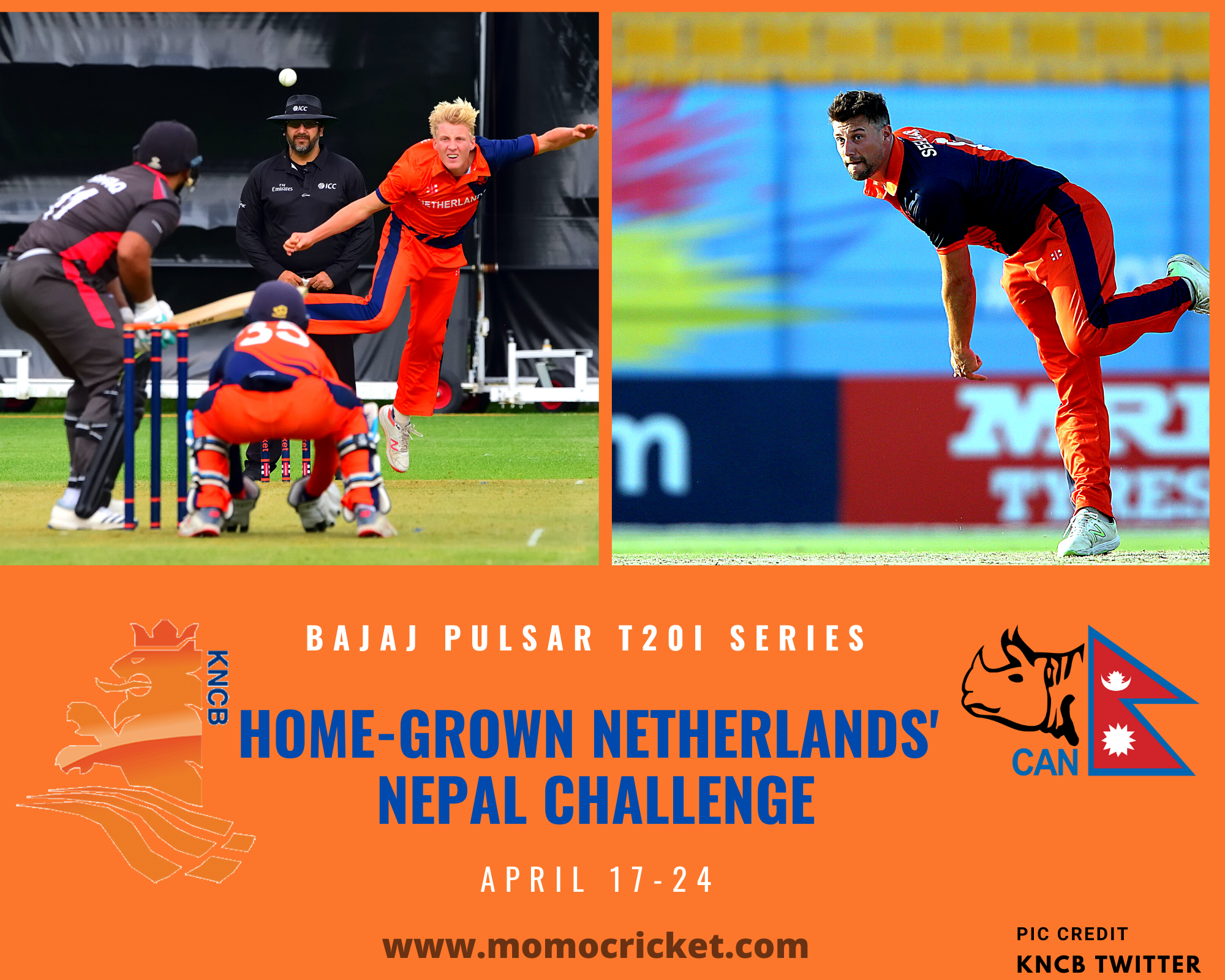 The head coach Ryan Campbell’s tenure was increased by 18 months earlier this year in quest to complete KNCB’s (Cricket Netherlands) ‘unfinished business’ after enjoying a productive spell in last few years. The Dutch team tasted success like qualifying for the ICC CWC ODI Super League and the ICC World T20 under his regime.

The Netherlands team’s tour to Nepal in a conditions somewhat similar to India, where the T20 world cup is slated for later this year, will be a test for a relatively young and inexperienced squad with exciting new prospects. Coach Campbell quoted, “the squad selected represents the future of Dutch cricket,” in conversation with the ESPNCricinfo. In normal circumstances (which is playing a cut-throat ICC four-matches-in-five-days-league for an Associate nation), they may have preferred to have services of Roelof van der Merwe, Shane Snater, Brandon Glover or Fred Klaassen but they deliberately did not look for the releases from County Cricket. In a non-pandemic world, Kiwi prospects Michael Rippon and Logan van Beek flying over for the series could have strengthened the team along with some star power. Basically a slightly depleted side but an opportunity for young players with an eye on future.

The Dutch team is treating this as a chance to test the extended Netherlands-based training squad, and to an extent even as a reward for the fringe players. They have been committed to training despite being non-contracted with an outside chance of breaking into the full-strength team.

“Circumstances have rather forced Cambo’s (Ryan Campbell) hand in terms of selection, but I reckon that the team doesn’t actually look hugely different from what he’d have chosen to take anyway. The squad is more-or-less the pick of the guys that have been training in the Netherlands over the winter,” stated Bertus de Jong, who covers Associate cricket for Cricbuzz.

Similarly, it is also notable for being the most “home-grown” team they’ve put out in a while, with everyone bar Scott Edwards and Ben Cooper having come up in the Netherlands.

The Netherlands have done the homework to include young spinners in the side to test them in a helpful conditions to continue their seamless transition in international cricket.

A lot of hope resides on young leg-spinner Philippe Boissevain according to de Jong. He is not a finished article yet but can get revs and bounce which can trouble the opposition batsmen. He can bat a bit too. Similarly, 17-year-old Aryan Dutt can hit a clean long ball. He might opt for off-spin if asked to bowl.

Similarly, Bas de Leede has been touted as future captain of the team. He is a proper all-rounder, though fitness problems has been keeping him away from bowling.

Eyes will be on Vikramjit Singh as well. The 18-year-old wonderkid had topped charts for the Netherlands at the ICC U-19 World Cup Qualifier Europe Region 2019 with 304 runs at 60.80 including a hundred.

Bertus de Jong further states that the Netherlands is trying to prioritize staying and playing in the country itself for the players to be eligible for the selection.

“I think, the thinking is that they’ve a solid team but can never be sure their best players will actually be able to play any given game. So, depth is a big thing, specifically Dutch-based depth.”

Former players like Julian De-Mey, Tonny Staal and Sebastiaan Braat are brought back into the set-up to reach any unfulfilled potential.

Likewise, Paul van Meekeren has invaluable experience of playing in Nepal before. He featured for Biratnagar Warriors in Everest Premier League. His opening bowling partner Vivian Kingma is far from sure pick in a full-strength team but will be leading the attack this time around.

The TU cricket ground has been a pleasant surprise since the domestic matches restarted after the lockdown. The same international ground being used throughout the year had taken its toll previously. The fresh pitches produced bounce and pace which is alienic in this part of the world. The Dutch team will still have to be ready for a trial by spin but the likes of van Meekeren and Kingma can expect movement and bounce with the new ball.

The Cambo camp’s fortunes will hinge on goods produced by the captain Pieter Seelaar and Scott Edwards, arguably the best player of spin in the squad. The TU surface will have just enough to suit Seelaar’s bowling (adding to his batting prowess) whereas Edwards can take game away from opposition with his aggressive batting abilities. Likewise, Max O’Dowd and Ben Cooper will have added responsibilities with the bat after the recent retirement of Wesley Barresi. Cooper has most runs for the Netherlands in T20Is.

Bertus de Jong is a huge fan of Singh’s batting but expects de Leede to step up and produce consistent runs for the Dutch batting lineup to do well in these conditions. “Singh could win any given match on his own if he gets his head right but I don’t expect any of the youngsters to perform with any consistency except for de Leede if he’s fully fit.”