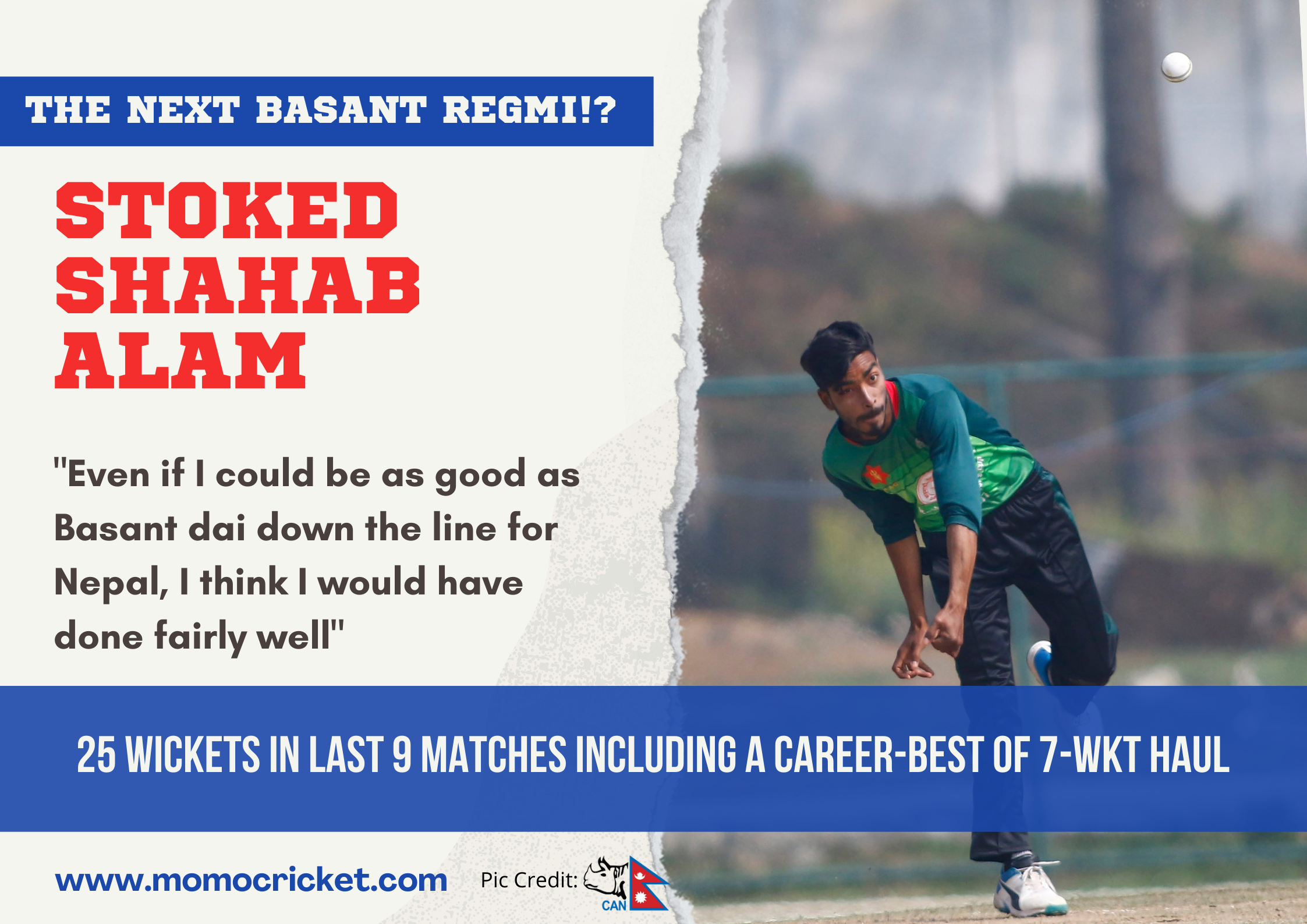 Among the army of left-arm spinners in Nepal, Shahab Alam is another upbeat name who aspires to represent the nation. If you ask me to aptly describe him in one word, it has to be a ‘workhorse’. A thinking bowler who climbed the ladder traditionally working his way tournament by tournament to become a genuine national team contender.

Alam is highly praised by the current world-cup winning Nepal head coach Dav Whatmore. If he ever has been any close to the national team, this has to be it. He stressed on importance of assurance can help a player give his best.

“When I started my cricket, I always use to worry about my place in the XI. I tried to overdo some things. Desperate for numbers to back my case. But I learned to take as it is for the day. I have been in good shape and frame of mind ever since,” said Alam. He added, “I try to do what we as a team decide my role would be for given day or the opposition. I try to execute that only.”

Alam’s eyes are set on national cap. He shared that his life doesn’t depend on it but it is something he really want to do at any cost. He is mentally ready and willing to work hard for years to come to make it possible.

“I am thankful to all for where I am today and I always dream to play for Nepal. I have my family’s belief and support in me. I wish to play for Nepal one day and my dad watching me from the stands.”

Shahab Alam is the BEST spinner that Nepal have for ODI. Be it a turner or flat track, he has always performed. https://t.co/mDwAdRfyil

Alam’s father, Lal Mohammad Ansari has been his biggest supporter in pursuing cricket as a career. Alam emotionally shared how his father watches every game he plays in Rupandehi. Alam feels proud when his dad shares stuffs from local coaches or senior players praising him, that he can go the extra mile if he continues to do well.

Similarly, Alam’s elder brother Parvez Alam was his first inspiration in cricket. His elder brother had played U-16 nationals which convinced him to take the sport in 2013.

The under-rated left-arm spinner Alam is another graduate from Nepal’s U19 national cricket team. A regular feature in domestic and franchise cricket, he never made a sensational headlines for picking up many wickets like his counterparts in initial days. His numbers were not inspiring but he always had that knack of getting the opposition’s big fish. From the support bowler to Sushan Bhari for his departmental team Tribhuvan Army Club, he has now become key strike bowler in the playing XI.

Alam so far had gone quietly about his career until recently when the numbers started to speak for itself during the Prime Minister (PM) Cup and Kathmandu Mayor’s (KM) Cup. From being dropped in the first match of the PM Cup to un-droppable by the KM Cup end. He almost singlehandedly kept Army in contention to win the low-scoring match against Mayor’s XI played at Mulpani Cricket Ground. He didn’t get support from the other end despite picking up career-best seven wickets. He finished Mayor’s Cup with 13 wickets, joint highest, in Army’s poor series of four matches. Earlier, picked 12 in five matches in PM Cup.

Shahab Alam has 25 wickets in last 9 50-over matches. In same period, Lalit Rajbanshi has 17 in 10 matches whereas Sushan Bhari has 10 in 8 matches. Bhari hardly played any matches in Mayor’s Cup with Alam establishing himself as no.1 go-to spinner for Army Club.

The 19-year-old don’t believe in any one moment is superior to other but his performance against Butwal Blasters during the Pokhara Premier League in 2019 truly raised many eyebrows. He broke the back of Blasters chase grabbing all three in-form overseas batsmen wickets. All three from India, evidently good players of spin, and wreaking havoc throughout the tournament dismantling left-arm spinners from other teams in tiny Pokhara Cricket Ground. “To be honest, the plan was to finish my overs cheaply. Minimize the damage they have been doing to other teams,” recalls Alam.

He never looked back he went in to grow as a bowler. From being an afterthought to key strike bowler for the teams he has been featuring for.

Alam, like many, is inspired from the greats of Nepali cricket like Shakti Gauchan and Basant Regmi who also hails from same district, Rupandehi. He has a story similar to his idol Basant Regmi. Alam started as a fast bowler but upon suggestion from his then coach Jung Bahadur Thapa, he changed his bowling style to spin.

“My first coach, Jung Bahadur Sir, was the one who made me bowl spin. He taught me the grip on how to hold the ball. It has been quite a journey since. From not knowing where the ball will land or which way it will turn at first to this day,” remembers Alam.

He was included for the first time in the national cricket team during the 35-member preliminary squad which was announced for the South Asian Games (SAG) in August 2019. He failed to make it further then.

He is grateful to his seniors. Former Nepal national Gauchan helped him in his early days for the transition into main stream from district and local games. Likewise, Binod Bhandari later guided him to bag an Army Club contract.

Alam likes watching Mitchell Santner (New Zealand) bowl. “The curl and loop he can produce is very tempting. He is on the money most time in limited overs cricket. I like his street-smartness when it comes to bowling according to the situation”. Alam is known for same traits in Nepal.

However, Alam don’t want to look beyond Nepal for inspirations. He aspires to replicate the contributions of the great Basant Regmi for the national team.

“Even if I could be as good as Basant dai down the line for Nepal, I think I would have done fairly well for myself and the national team. He still is one of the toughest bowler to play against,” credited Alam for one of the most successful spinners in Associate cricket.