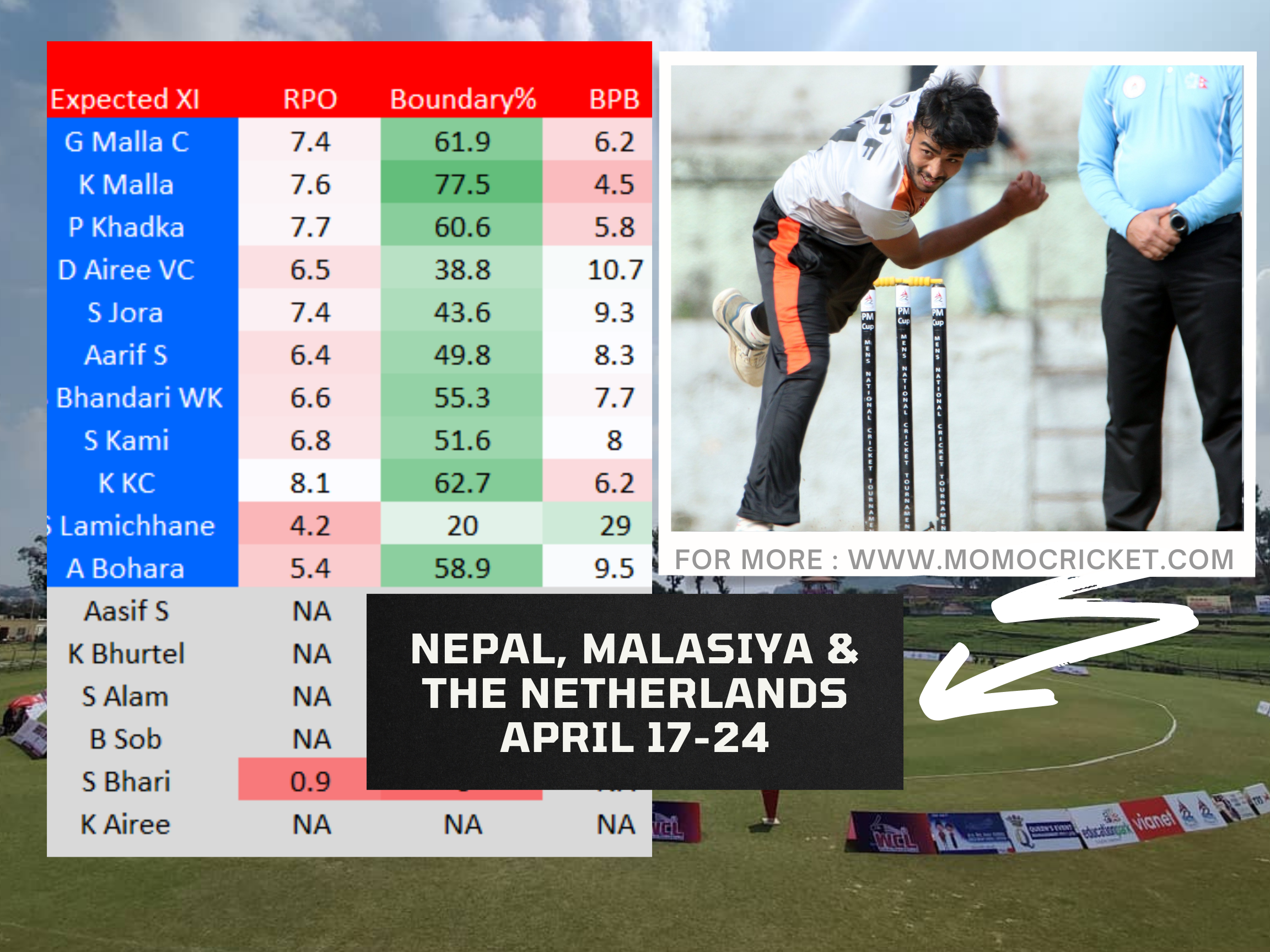 Cricket of Association of Nepal (CAN) organizing plenty of domestic leagues in recent times has helped fringe players to evolve and make case for the selection. Few of them got rewarded as well.

Aasif Sheikh has finally made it to the national team. Kushal Bhurtel, Kamal Singh Airee and the latest graduate from Nepal’s school of left-arm spin, Shahab Alam has been included for the first time in the squad for the upcoming Tri-series against the Netherlands and Malaysia starting on April 17. However, the exclusion of Sundeep Jora still feels like a big void.

So, what is all these fuss about Jora?

It was not just that Jora scored most runs in two domestic events (Prime Minister Cup and Kathmandu Mayor’s Cup) combined but the way he made those runs. He looked in sublime touch. A blend of an accumulator and stroke-maker who can play according to the situation.

Jora’s numbers in national colors are equally astonishing. His runs per over (RPO) comes at an average of 7.4 despite having a boundary percentage (B%) of only 43.6. He finds a boundary every 9.3 deliveries (BPB=Balls per boundary). His RPO is overall fourth best tied with Gyanendra Malla among the Nepal players who has scored at least 100 international runs in T20Is. Karan KC (8.1), Paras Khadka (7.7) and Kushal Malla (7.6) are better than Jora but all three of them hails B% of more than 60. Interestingly, Jora’s BPB is overall fourth worst only above Subash Khakurel (12.7), Dipendra Singh Airee (10.7) and Sharad Vesawkar (9.8). That’s where Jora’s abilities defy logic. He can be the ‘runner between the wickets’ Nepal has always yearned for. He doesn’t score many boundaries but finds a way to stay busy at the crease. He is a combination of Karan KC and DS Airee in the team. Or he could have been.

But, who are the names that matter?

Moving on, Aasif Sheikh has finally fulfilled his prophecy of making it to Nepal national team after impressing everyone with a century in the final of Everest Premier League held in 2016. He is striking them as good as anyone. He can be real asset at top of the order. Aasif, unlike his elder brother Aarif Sheikh, doesn’t take time to get going. Expect a quick-fire start in powerplay. Similarly, and arguably, the most T20 specialized selection in the team has to be Kushal Bhurtel. I wouldn’t be surprised if he is preferred ahead of Aasif or Kushal Malla to start with skipper Gyanendra Malla at top. Bhurtel had a mediocre run in the one-day leagues but was adjudged Best Batsman in the only T20 Cup Nepal held earlier this year after the lockdown. The right handed batsman was a pace-bowling allrounder when he first started with the U-19 national team in 2015-16. He has come a long way to open the innings for his domestic team Nepal Police Club and possibly Nepal during the Tri-series.

Ok, What else?
Sompal Kami and Sandeep Lamichhane has not played a single T20I match at TU Cricket Ground for Nepal. Similarly, Avinash Bohara is yet to take a wicket at the venue in T20Is. Hence, the omission of Lalit Rajbanshi, the highest wicket-taker (6) at the ground, can come back to haunt Nepal. The selection of Shahab Alam is a positive move but Nepal may have dropped the wrong spinner to make room for him. Rajbanshi has been the most successful left-arm spinner Nepal had after the stop-start selection of Basant Regmi in recent times. Likewise, CAN is firmly looking into the future with gradual phasing out of veteran Sharad Vesawkar as well. The veteran batsman has the knack of scoring important runs for Nepal but it comes at a Strike-Rate of 117. It is better than DS Airee’s 110 but, probably, vice-captain Airee has age, form and future responsibilities on his side.

Let’s cut to how are we going to win matches?

It’s a team game. The performance on the day will matter but the availability of Sandeep Lamichhane for a home series gives Nepal an edge. He has 16 wickets for Nepal in 10 wins with an impressive economy rate of less than 6. Karan KC triumphs though. The bowling-allrounder has 25 wickets in 14 wins with an ER of 6.58 and SR of 11.4. The numbers which landed him a T10 gig with Pune Devils in Abu Dhabi earlier this year. Similarly, Kami’s 14 in 12 wins and Bohara’s 10 in 11 makes a quartet of, arguably, Nepal’s best T20 bowling lineup in recent years.

Paras Khadka tops the batting numbers. It’s not even a news anymore. His 521 runs in 15 wins is most for Nepal. The SR of 148 makes it great. Skipper Malla comes second with 338 runs in 13 wins with a good SR of 135. Malla did well to redeem himself during the South Asian Games 2019 when he scored his first T20I century against Bhutan and a good run of scores throughout. Likewise, Binod Bhandari can be a real asset down the order for Nepal. His splendid form at TU Cricket Ground can be crucial. And finally, when it comes to gob-smacking the cricket ball, there is not better than Karan KC. His SR of 169 in 14 Nepal wins tells the whole story. He still might bat at number 8 or 9 to start with.

The brothers Virandeep and Pawandeep Singh are going to be key for the visiting team. Reportedly, Virandeep has added a lot more of power to his game whereas Pawandeep is someone who can take the mettle of lead spinner’s role. The ever-dependable skipper Ahmad Faiz along with left-handed southpaw Syed Aziz form a quartet of very capable players who can cause problems to either bowling sides. Similarly, the left-arm pace bowler Wafiq Irfan can be a surprise package on his day. Nepali fans do remember Omani Bilal Khan’s exploits last time Nepal held an international series at TU.  Irfan picked seven wickets in three matches during the MCA T20 Super Series which was played in slower surfaces as a preparation for the Nepal tour. Likewise, Shravin Muniandy will have all the confidence with his player of the match performance last time he faced Nepal. The two teams met last time during the ACC Eastern Region T20 Qualifiers before the pandemic. Malaysia won the match by 22 runs with Muniandy picking up four wickets.