The Parallel Lives of the Unparalleled Ones: AB de Villiers and Lionel Messi 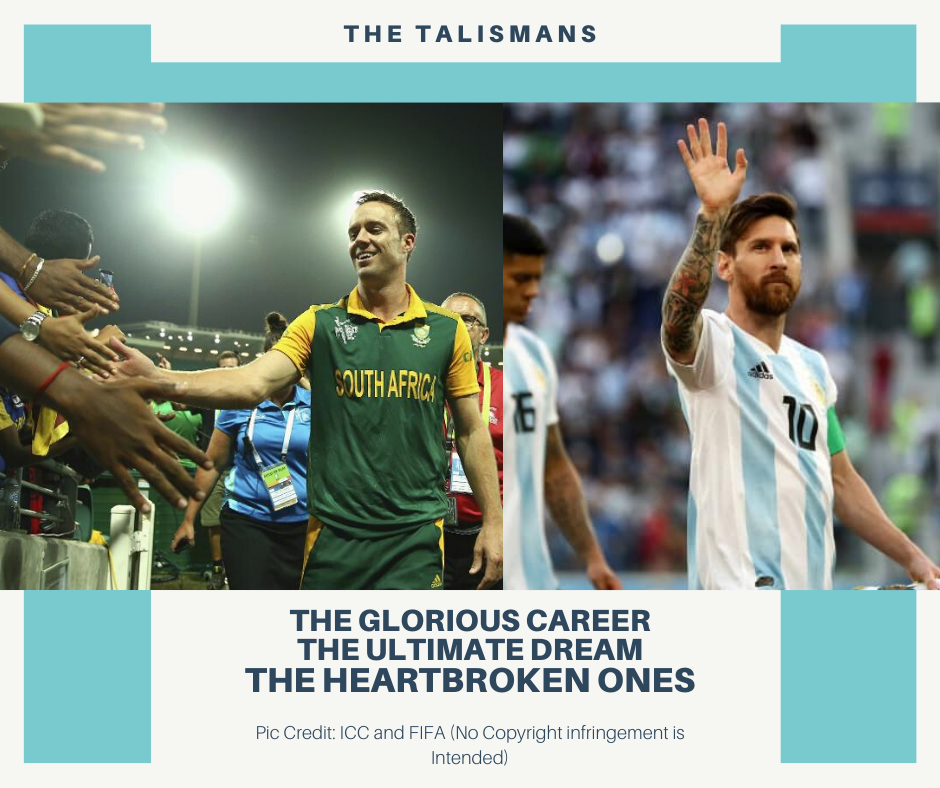 The Parallel Lives of the Unparalleled Ones: AB de Villiers and Lionel Messi

Lionel Messi and AB de Villiers are the two of the most popular and recognizable athletes in the world. Messi and de Villiers both are considered as one of the best ever to play their respective sports. The manner in which both approach their game is quite similar as well. Both back their supernatural ability and have developed reputations of being beautiful as well as destructive at the same time. The careers, which started and peaked almost at the same time, is filled with numerous individuals and collective honors. But it is their international career that has went through turbulent phases.

De Villiers holds the record of scoring fastest 50, 100 and 150 runs in ODI cricket, is the 2nd fastest batter to reach 9000 ODI runs, is the 2nd highest run scorer (9427) and has scored 25 centuries in ODIs for South Africa, all over the strike rate of over 100. This are no regular occurrence in cricket. It, at times, is inhuman. He has played over 100 test matches for South Africa and amassed 8765 runs for them. Messi is the most capped Argentine in the history (142) and is the nation’s top goal scorer (71). These are some of the numbers that AB and Messi have put up for their national team. Despite being successful individually for their national side, general notion is they underachieved with their national teams. Their careers have gone through similar pattern and there are so many parallels one can draw. Their international career which started in 2004-2005 and peaked in between 2011-2015 has suffered numerous heartbreaks at the biggest stages.

South Africa and Argentina both went through the period of rejuvenation after 2011. De Villiers was entrusted to lead the South African team which consisted of fiery duo of Dale Steyn and Morne Morkel, ever reliable Hashim Amla and Francois du Plessis, middle order batters JP Duminy and David Millers all in their 20s. Similarly, Messi had Angel Di Maria, Sergio Aguero, Gonzalo Higuain, Javier Mascherano etc. The national teams of South Africa and Argentina which had enormously underachieved in the international since long time, hoped that their new and talismanic captains would help change their fortunes. But things didn’t turn out as many had predicted.

Messi and de Villiers started to perform miracles after 2011. Messi had that 91 goals in a calendar year campaign, a record which probably will be never broken by anyone ever again and ended the FIFA World Cup Qualifiers 2014 as the second top scorer whereas de Villiers firmly established himself as one of the best batsman in all 3 formats, scoring 16 out of his 25 ODI centuries between 2011 and 2015 and reached the top of ICC Test batting rankings in 2012.

Messi and de Villiers both were/are match winners. They started to perform other worldly miracles and developed the reputation of being ruthlessly beautiful at their game. Each goals that Messi scored looked better than the previous one. De Villiers rose as a player capable of hitting bowlers anywhere he pleased to, earning him the famous nickname, Mr. 360. There was no better sight in football than Messi dribbling in the midfield area of the pitch, evading the tackles, running with the ball glued at his feet and finishing effortlessly with his left foot. Similarly, de Villiers’ shuffling in the crease and scooping the fast bowlers over fine leg region was something that couldn’t even be recreated by anyone even in the rubber-ball cricket. It looked like as if the sporting gods themselves bestowed their ability to these two geniuses. Or they simply transformed into a mortal being and came to enjoy two of the best sports to ever exist in entire history of mankind. After all, the normal these two players could pull were the extremes for the most of the players.

By 2015, Messi had already established himself as one of the best to ever play the game and de Villiers was regarded as the player fit to rank with the players from any ages of cricket. But the collective dream with the national side always eluded them, in a disappointing manner.

Their reputation of being capable of winning the game single handedly meant that their national side depended upon them, probably more than they would have liked. Or the narrative was developed for it need to happen through them. When the situation got tough, de Villiers and Messi have almost always been the sole survivor and hope for their national side. They didn’t lack the supporting casts around them. But in the boiling points of the match, the superstar casts around them looked at them to carry them over the line.

FIFA World Cup 2014 and ICC Cricket World Cup 2015 ended in heartbreak for Messi and de Villiers respectively.  The first world cup as the captains for their respective side, their teams suffered at numerous moments but managed to glide into the latter stages of the competition.

Argentina and South Africa were both considered as the favorites to win the title. No one was surprised that Argentina made it to the finals and South Africa made it into the semi-finals. Messi and de Villiers, as had been the case in the 4-5 years building to it, performed brilliantly as they won games for their team. Messi won man of the match award in the first 4 matches whereas de Villiers registered two centuries in the group stages.

Co-incidentally enough, in the most important games, both faced the opposition that had humiliated them in the previous editions. Argentina which had almost smooth run so far faced Germany in the final, the team which had beaten them 4-0 in South Africa and was fresh of hammering Brazil 7-1 in the semifinal.

South Africa faced New Zealand in the semis, the team which had beat them 4 years ago, in the match which was build as  ‘final before the final’. South Africa, which had shown some weaknesses in the group stage, was still a team to be feared whereas New Zealand, being host and playing attacking brand of cricket, was probably the strongest team.

Argentina lost against Germany as Mario Gotze’s goal sealed Germany’s fourth world title. Higuain, Palacio and Messi missing golden chances meant that Argentina missed the chance to score that all important first goal. Messi’s miss will haunt him probably for the rest of his life. He would have buried that 999 out of 1000 times any other day.

Similarly, in the tense cricket final, South Africa went down to New Zealand in one of the greatest chases cricket has ever seen. Missed run out chances, dropped catches and de Villiers, who was considered as one of the best fielder in the world, uncharacteristically missed on a run out chance. It meant that South Africa lost the chance to impose themselves upon the New Zealand.

It is said; in the toughest of situations, it is important to focus on the process than worry about results. It is hard to not worry about the result in the most important match of your life when you are a player, even harder when you are the captain and the best player. It gets harder to focus on the game plan and strategy when you start worrying about the results. You won’t be able to process the flow of the game. In the important games, it is the small details that differentiate the winners and the losers. The one who makes the less errors comes out on the top. When you start worrying about the results, you start making the uncharacteristic errors and you won’t find yourself ready for the clutch moments.  Probably, this is why Messi and de Villiers committed those mistakes.

Messi went on to suffer further heartbreaks, losing to Chile in 2015 and 2016 Copa America. Again, Argentina fluffed the golden chances and Messi himself missed the penalty kick in the tie-breaker. Probably, again the case of worrying about the results more than the process.

Messi and de Villiers have had the fantastic careers etched in the history books of their respective sports. Messi is widely regarded as the best player in the history of the game whereas de Villiers is regarded as fit to be included in the same bracket with the very best of the game. But it is no secret that they would want to win something with their national side as well. Messi himself conceded in 2015 Ballon D’or that he would happily trade his all individual awards for a World Cup trophy. Time and time again they have revealed their desire of winning something with their national side. The great people are sometimes the victims of their own greatness. Every time Messi and de Villiers stepped in to the pitch, everyone expected them to perform better than they have ever done before.

De Villiers retired in 2018. Messi probably has one last world cup left in him. It is highly unlikely that de Villiers will return ever again for international cricket after making his intentions clear recently that he doesn’t see himself playing for South Africa again. For Messi, the defeats with Argentina has hurt him so much that he retired in 2016 but returned in the same year. Their career graph took off in the same era, skyrocketed in the same time frame and went through similar difficulties.