“My father is my academy” Sandeep Sunar 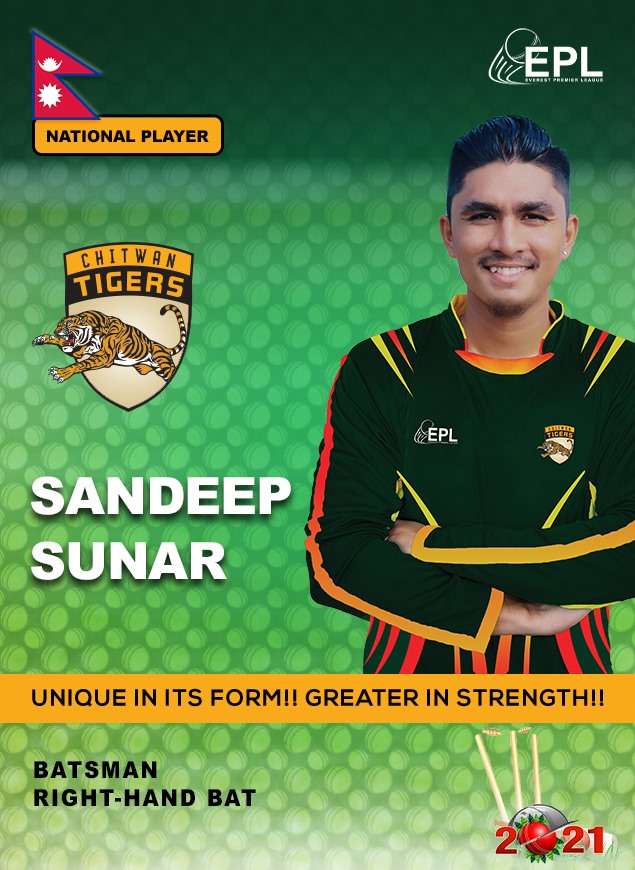 “My father is my academy” Sandeep Sunar

The opening batsman who has a penchant for hitting quick runs in the powerplay, Sandeep Sunar, marked his arrival with 39 runs for national U-19 cricket in a 32-run win against New Zealand during the U-19 cricket world cup held at Bangladesh in 2016.

The 21-year-old has represented Chitwan Tigers in the previous editions and has scored the most number of boundaries, 16, for the team. A strike rate of 121 in 2018 is only the second-highest among the Nepali players and fourth overall for Tigers in Everest Premier League.

A prototype T20 opening batsman is skilled with the ball as well. A mystery spinner, he can surprise batsmen with subtle variations and pace changes during deliveries. Described as a leg-break googly bowler by Espncricinfo, Sunar is known for changing the grip altogether and bowl orthodox off-spins to keep the batsmen guessing.

My father, Ganga Ram Sunar, is my biggest inspiration in cricket. He was a sports coach in the school I used to study. A former national football player, he first introduced cricket to me when I was in the eighth standard. He set up a practice net in the home for me to keep practicing cricket. I never went to any academy. My father is ‘my academy’. My father never played professional cricket but he was passionate about it. He always pushed me. he believed I can represent my country in the future.

I went to represent my country in 2016 featuring in ICC U-19 Cricket World Cup where we reached the quarter-final. In 2020, I opened up my own academy to support and motivate young players to learn and enjoy cricket back here in my town which is a bit farther than the main city area. I want to develop this area. I feel it is my responsibility to give something back to this place that helped me be an international player. I named it GR (Ganga Ram) Cricket Academy.

My family has always been very supportive. My locality has been very motivating. They have always recognized me for whenever and whatever I have achieved in cricket to this day. So far, I haven’t thought about any financial advantage from cricket. I understand financial security is also necessary. All I ever want is to don the national jersey with pride. And not only wear it but keep performing for the national team and take the nation to new heights.