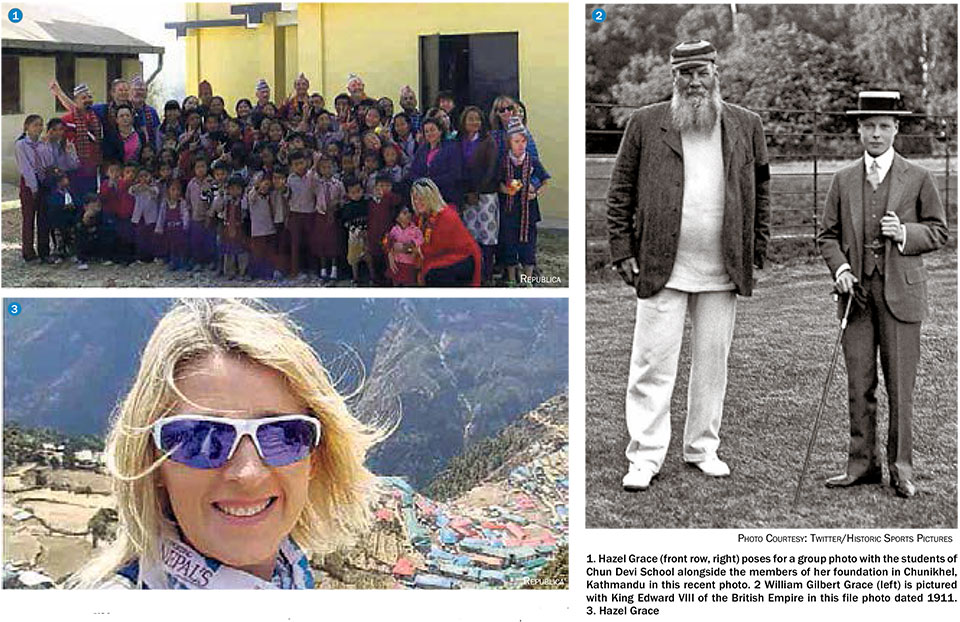 It started with a tiny village in Pangboche, situated just six miles from Mount Everest. A group of volunteers mainly originated from England are on a mission to equip schools in the mountainous area and thereby radically increase the quality of education and learning for young students to have a better chance to progress in life.

A volunteer organization, Supporting Nepal Children (SNC), led by Hazel Grace, Roger Owen, and Nadine Phillips are mobilizing donations to help build and equip schools so that the marginalized children from remote areas like Solukhumbu can have the opportunity to fulfill their dreams.

“Nepal is the place that makes my soul sing and I absolutely love being here and helping people here. It is difficult for me to put it in the words that how much I love this place,” said Hazel Grace, the 51-year-old from England, carrying the legacy of William Gilbert (WG) Grace in conversation with Republica.

The ‘father of cricket’

WG Grace is taken as the ‘Father of Cricket’, the second most followed sports in the world. He played first-class cricket for a record 44 seasons, from 1865 to 1908, during which he captained England, Gloucestershire, Marylebone Cricket Club (MCC), the United South of England Eleven (USEE) and several other teams. Hazel Grace comes from the same family tree blessed with cricket and lately helping kids in Nepal. Cricketer Grace died in 1915 aged 67 but his legacy continued to grow into one of the world’s most captivating sports along with generations of the family taking up the sports as a professional career.

The great-great-granddaughter of Sir WG Grace, Hazel is the eldest of the three girls in the family. Like most members of her family including her dad, she was obsessed with cricket. She used to spend her summer holidays watching five day Test matches at home. “My friends used to find me a bit strange. I loved it, I enjoyed it. When I saw my first cricket match which was a Middlesex match at the Lord’s, I absolutely loved it,” said Grace.

She fondly recalls her mini-movement (a protest) in school to include girls in sports curriculum which was separated for boys only. “Back then in my school cricket was all boys’ sports but we kept petitioning for girls to be involved for the sports as well. And finally, it was approved in my last year of the school. But I am proud now that cricket is played in the curriculum hour for girls too.” 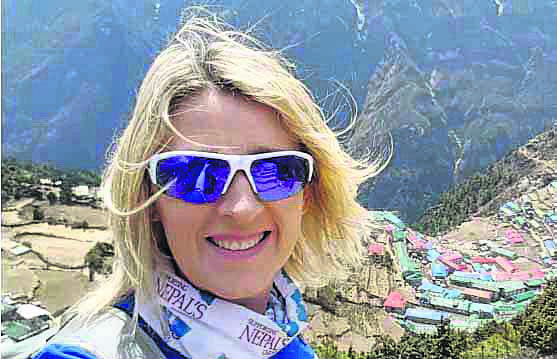 She is well aware of Nepali cricket as well and ardently follows it. “I was in Lord’s this year (2018) when Nepal was playing the tri-series with Marylebone Cricket Club (MCC) and the Netherlands but unfortunately it rained most of the day. I was wearing my Nepal shirt and took a load of selfies with the Nepali players,” she explained.

She further adds her association with one of the Pokhara Premier League (PPL) franchise Butwal Blasters who came up with sports kits and equipment to help schools supported by the SNC. “I followed PPL from Namche. Butwal Blasters had donated for my charity and I was like following them. My schedule was already filled with my works or I would have watched every match from Pokhara itself.”

The legacy of Grace
Grace’s UK-based non-profit charity organization’s plan is to serve 20 schools by 2020 and hundred by 2040. “The volunteer hands keep growing and intentions are pure that is the most important part. We publish our account in UK every year and our expenses are like 2 to 4 percent which is very minimal,” said Grace.

The organization’s mission is inspired by Tenzing Norgay Sherpa and the hundreds of courageous Sherpas, who risk their lives every climbing season to further their children’s career choices through expensive schooling, miles away from the family home.

SNC doesn’t advertise for donations but puts up collection boxes at various mountain trails, tea shops and trek lines with a message to put up their email addresses, not money, so, that any member from the organization could contact them for donations. “You have limited money while traveling but you may want to donate more. It sounds ruthless but one would rather donate more when you are back at your home in the UK or Australia or the US rather than just Rs 200 in the collection boxes. I would rather want that money to go to your porter or local liaison,” added Grace. Donator can always contact the organization on an official website.

SNC is currently involved with nine schools currently starting less than six years ago. In 2017, it had a 22-people group coming to Nepal who raised 235,000 pounds helping build 14 classrooms in two schools inside Kathmandu Valley as well. “We work in financial services in UK but we got our hands dirty last time around and worked with bricks and stones for building the classes. Everyone (the UK group) did the manual labor and liked it.” They also got to meet the kids from the school for whom they raised the funds. “It was a nice moment. They know where the money is going and for what purposes.

Grace and her friend Owen first came to Nepal in 2012 for trekking in Everest Base Camp. They came back again in 2013 with a big team of about 25 British peoples with an intention to help Sherpa kids. They raised 7,000 pounds for a UK project. It motivated them to start looking for projects centered on schools to help children. They set up a whole foundation to keep supporting children in this region and Nepal for a long time. SNC was found in May 2013 and is functional for the last five years.

“The charity is something you do it for life. Because when you help a school then you help all the children studying there. It remains there for rest of your life. We started from schools in the trekking routes of EBC [Everest Base Camp] as we realized it is the place where the help is most needed,” said Grace.

The legacy of Grace continues to support children in Nepal. “The first time you come to Nepal is for mountains, the second time it is for the people. Obviously, how can you not love the scenery that Nepal has but the genuineness of the people here is the one that hooks you. The care they have for you, be it any village or city, you keep falling in love with them. They make me feel love a little bit more for the place,” said Grace.